The G14 is a creator’s laptop first and a gamer’s laptop second.

When it comes to designing laptops, I’d argue that a creator’s needs are harder to fulfil than a gamer’s, and I’m not referring to that fickle, artistic temperament here.

Gamers just need fast displays, powerful GPUs, and CPUs with enough grunt to not bottleneck the GPU. A fast SSD also helps with load times and texture pop-in. Battery life doesn’t matter — you’ll never be gaming on the go, not with a proper gaming laptop — and colour accuracy is also not critical as long as the display has enough range to not keep you blind. While not particularly slim, the G14 is light and can look elegant. Image: Anirudh Regidi

A laptop for gamers just needs the right specs and thermal design.

A creator, on the other hand, needs a laptop with a powerful CPU, a GPU with features like hardware decoding for specific codecs (to accelerate video editing), a carefully calibrated, high-resolution display, great battery life for editing on the go, and all of this in a package light enough to be lugged around in a backpack.

The Zephyrus G14 with the 2k display, while it may look like a gaming laptop, is almost a perfect creator’s laptop.

With a powerful Ryzen 9 4900HS CPU and RTX 2060 Max-Q GPU, you’re getting a device with the processing grunt to handle 3D renders and the smarts to adequately accelerate video rendering and editing. RTX support also means that one can take advantage of ray-tracing features not just in games, but also in apps like Blender and Adobe After Effects.

More importantly, you’re getting a fairly accurate 1440p display. This is a 60 Hz display, which means some amount of motion blur in games; and it’s 1440p, which is way too many pixels for an RTX 2060 to handle well. The 14-inch screen is also very uncomfortable to game on. 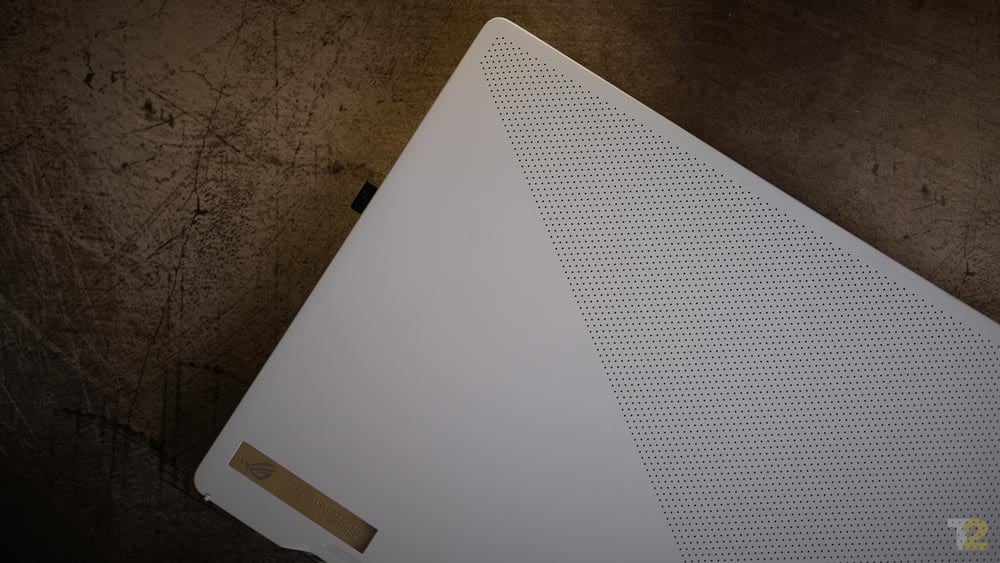 The eye-catching lid is what sells the design of the G14. Image: Anirudh Regidi

For creators, this display is excellent — though it still should have been bigger. The resolution means you can edit videos or photos more comfortably, and I measured a colour gamut of 94 percent sRGB and brightness of 222 nits. Contrast ratio was a healthy 882:1.

These figures mean that the display is accurate enough to edit photos and videos on, and that it’s bright enough for comfortable use indoors.

The default white balance is a bit off and colours do tend more towards reds and blues, but I don’t think it’s off by so much as to bother anyone but the most fastidious of creators, who are all likely sitting on MacBooks anyway.

Oh, and this laptop has top firing speakers (Yay!). And they’re loud enough to be useful.

If this were purely a gaming laptop, I’d argue that the CPU was unnecessary and that the thermal budget should have gone towards a more powerful GPU. Since it’s not, I’m happy to have this 8-core, 16-thread monster of a CPU to play around with.

In gaming tests, I found it impossible to even approach 60 fps at 1440p without opting for the med-low settings. Just take a look at these figures:

This is not a gaming beast, and to get playable fps at 1440p, you’ll need to turn RTX off, which makes one wonder why they need to shell out that premium for an RTX card to begin with.

On the other hand, performance for creators, in photo/video editing, 3D rendering, and even compiling code, was right up there with the best. The AniMe Matrix LED panel on the lid looks rad and is my favourite feature on the Zephyrus G14. Image: Anirudh Regidi

The G14 converted a 90-minute 1080p movie to H.264 in 18 minutes using just the CPU, and to H.265 in a mere 15 minutes using Nvidia’s NVENC tech. The Mozilla Firefox build finished in just 28 minutes (it normally takes about 40 minutes to an hour on other laptops), and the Junk Shop scene in Blender rendered in a mere 94 seconds because of that CPU and RTX acceleration. This is 25 percent faster than on laptops with non-RTX cards.

In Cinebench R20, a 3D-rendering benchmark, I saw the second-highest score I’ve ever seen on a laptop: 4,187, which is just 3 percent shy of the performance I’d seen on the MSI GT76 Titan, a Rs 4 lakh behemoth that would require a forklift to haul around safely.

Battery life is also fantastic, with our standard PCMark 8 test measuring 8 hrs 30 min, which is enough for even Ultrabooks to start worrying. But, there’s a caveat.

This laptop runs hot, really hot. While the laptop hit its power limit before it hit its thermal limits, the surfaces that you come in contact with — the keyboard area under the WASD keys, the palm rest region, and the bottom panel — get almost too hot to touch. While I didn’t face the issue myself, my editor reports that once the laptop overheated so badly that it shut down on him. Given the heat this thing generates, I’m surprised this didn’t happen more often.

… but it looks cool

I must say, this is certainly one of the most eye-catching laptops I’ve seen. I’m not one for in-your-face LED lighting and rainbow RGB, but I loved the AniMe Matrix LCD grid that graces the lid of the G14.

As you can see in the pics, the lid is perforated in a set pattern and little LED lights poke through. These LEDs can be made to render pixelated images and animations, which looks really cool when you first encounter them. Those who don’t like ’em can turn off the lights.

The laptop is also fairly slim, given the hardware its packing, and comes with a decent selection of ports. These comprise 2x USB type-A ports, 2x USB Type-C ports, 1x 3.5 mm combo jack, a full-size HDMI output, and a proprietary charging port. All USB ports are rated for USB 3 speeds, but sadly, there’s no support for Thunderbolt 3. A complaint on the design front is the keyboard backlight. It’s really bad. So bad, in fact, that I preferred to turn off the backlight and use the ambient light of the display to read the keys. Something about the design and choice of coating meant that with the backlight on, the keys were impossible to read.

Verdict: Hot and pricey, but a good deal for creators

I like the G14. It’s built well and the design is unique, and to some eyes, rather elegant.

For creators, whether you’re creating games, editing photos, or rendering video, performance is fantastic and right up there with the best.

ASUS tells us that this review unit retails at Rs 1,61,990, which is a bit high given that proper gaming laptops like the Lenovo Legion Y740 can be had for about 10k less while also offering a more powerful GPU. The Zephyrus G14 is slimmer, though, and comes with a more powerful CPU and a better display, which is, I think, fair trade.