Now that the Samsung Galaxy Note 10 and Note 10 Plus have launched, it is time to prepare for flagship launches from its rivals - Apple and Google. While Apple's hardware event is scheduled in September, Google will follow soon with its Pixel 4 series launch. New details regarding the new Pixel 4 series devices have just been leaked.

According to a report by 9to5 Google, the upcoming Google Pixel 4 and Pixel 4 XL will most likely come with a 90 Hz 'Smooth Display'. While the Pixel 4 is expected to sport a 5.7-inch Full HD+ display, the Pixel 4 XL could come with a 6.3-inch Quad HD+ display, both being of the OLED variety. Currently, the OnePlus 7 Pro and the Razer Phone 2 sport a 90 Hz display. More details regarding the camera specs are out as well. From the render that Google itself dropped in June this year, we know for a fact that the Pixel 4 series would be coming with a dual-camera setup on the back with a possible third time of flight (ToF) sensor. According to the leak, one of these is a 12 MP sensor with phase-detect autofocus. The other sensor is most likely a 16 MP telephoto lens, which was also revealed by a Google Camera app update (version 6.3) for Android Q. On close examination of the app, XDA Developers found “telephoto” mentioned in the code. Another change spotted was Google Camera sensor IDs that labelled all the sensors. It includes “front IR”, “front regular”, “front wide”, “rear regular”, and “rear telephoto”. These extra lines of code aren’t present on version 6.2 of the Google Camera app as confirmed by XDA.

The report also hints at a DSLR-like attachment for the Pixel 4 series which could come as an accessory in the future. This sounds more like Motorola's modules for its Z-series phones. 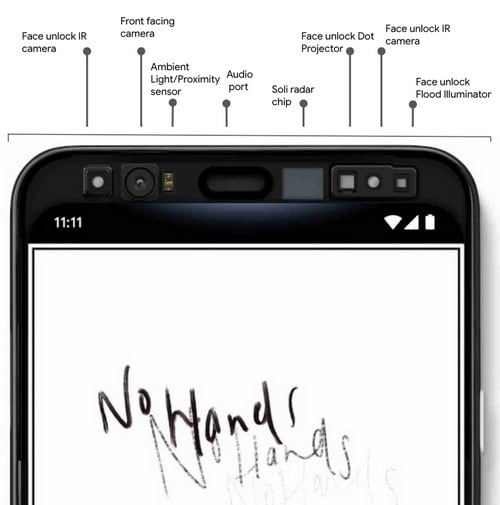 Google was reportedly working on a Project Soli, that dealt with motion-sensing technology, by utilising very tiny radar chips to detect gestures in 3D. Pixel 4 is expected to have these radar chips. XDAdevelopers confirmed the news of 'aware' sensors in Pixel 4, hinting at the use of Project Soli's chips. They also suggest that this upcoming phone will let users control music playback with the help of this chip instead of touching or talking to the device. This means that the Pixel 4 series most likely won't come with a notch.

Google will announce the Pixel 4 lineup officially at its own event that’s usually scheduled in the month of October.