Google Android O launch date set for 21 August; solar eclipse to be a part of it

The Android O launch event will also coincide with the solar eclipse and Google will be the making the most of the celestial event.

And it's finally here! No! It's not the name for Google's next Android software update, but a launch date where Google will showcase all of its sweet goodness along with its name. The Android O launch event is set to take place on 21 August at 2:40 PM ET, will also coincide with the solar eclipse and Google will be the making the most of the celestial event. Google has a website up and running with a countdown to the event and the eclipse, both of which will be live streamed during the event to the rest of the world during the launch event.

We are just 3 days from launch and while the most of us (Pixel owners in particular) will enjoy the new release, others will have to set their own respective countdown timers waiting for their smartphone manufacturers to deliver the same.

Moving to the fancy website, there more than the just the Android O launch countdown timer. The eclipse too will be a big part of the whole event as the informative website also provides an eclipse tracker for fans in the US. 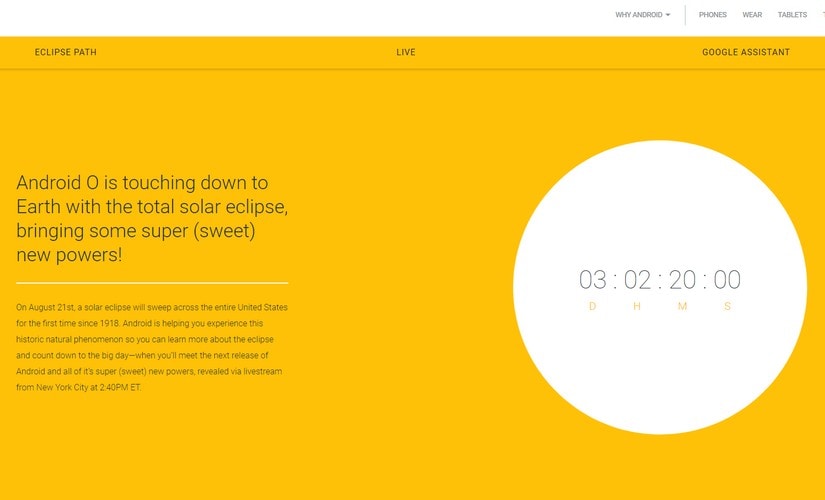 The website also links to both the Google Android O event live stream and the Nasa 2017 Total Eclipse live stream as well.

Apart from the above, Google has also plugged in how one can use the Google Assistant to learn more about the solar eclipse. Also available at the very bottom of the page, is a link to the The Eclipse Megamovie Project that will gather images of the 2017 total solar eclipse from over 1,000 volunteer photographers and amateur astronomers, as well as many more members of the general public.

Google will stitch these images together and create a continuous view of the solar eclipse as it passes over the United States. The data generated from the same will be available to the scientific community for research.