Does the OnePlus 6 offer such an immense upgrade that I part from the OnePlus 5? I don't think so.

It has been nearly one full year since Chinese smartphone maker OnePlus launched the OnePlus 5. Being a long time OnePlus fan and an ardent follower of OnePlus' great hardware at a good price philosophy, made me gravitate towards the phone. I'll be quite honest. I laid my hands on the device after nearly two months of its launch and my experience with the device has been nothing short of exemplary. At a price tag of Rs 32,000, the phone was everything I could dream of and more. The hardware was powerful, the software was seamless, the display was amazing and the camera (in my opinion) was the best in its price range. 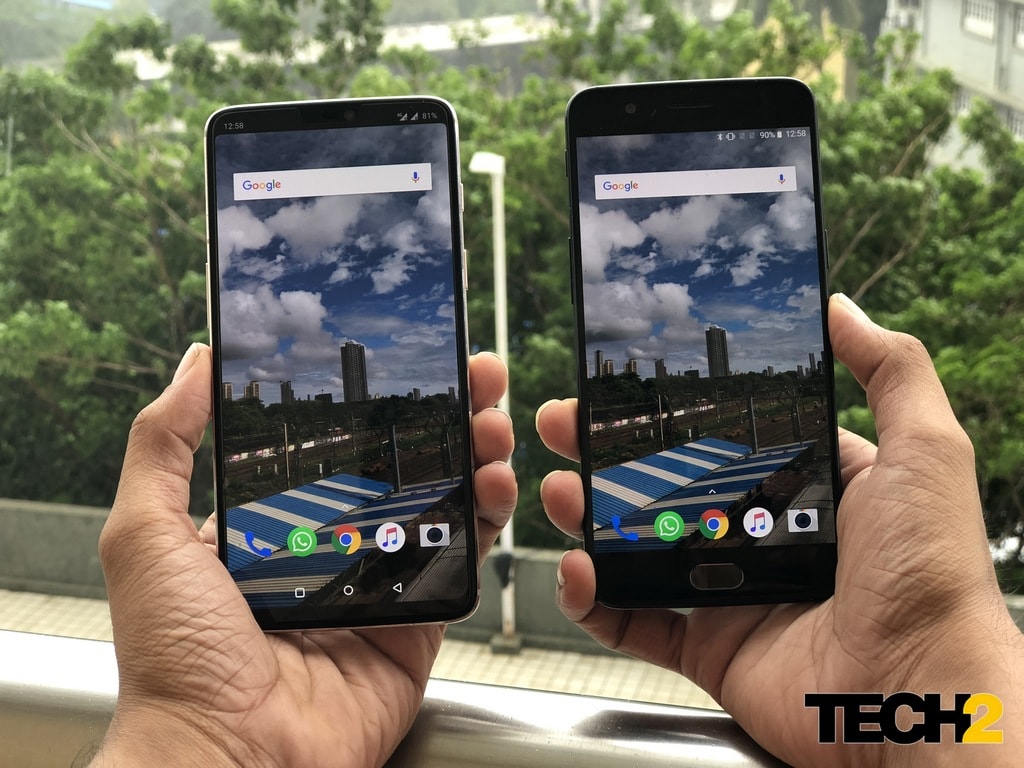 I admit I did feel slightly annoyed when the OnePlus 5T launched just 3 months after I bought the OnePlus 5. But when I used the device I found out that I was not missing out that much. Admittedly, the 5T had a slightly bigger screen and a slightly better secondary camera, but that was about it. In the months that followed, predictably the OnePlus hype became somewhat dim and credit has to go to Samsung, Vivo and Huawei for making all the noise.

But OnePlus is OnePlus. It knows how to steal the thunder.  Everyone knew the next-gen OnePlus was coming. Rumours on the net, controlled leaks, exclusive interviews, and a strong social media campaign became the concoction that sold the OnePlus 6 to the audience even before it was launched. 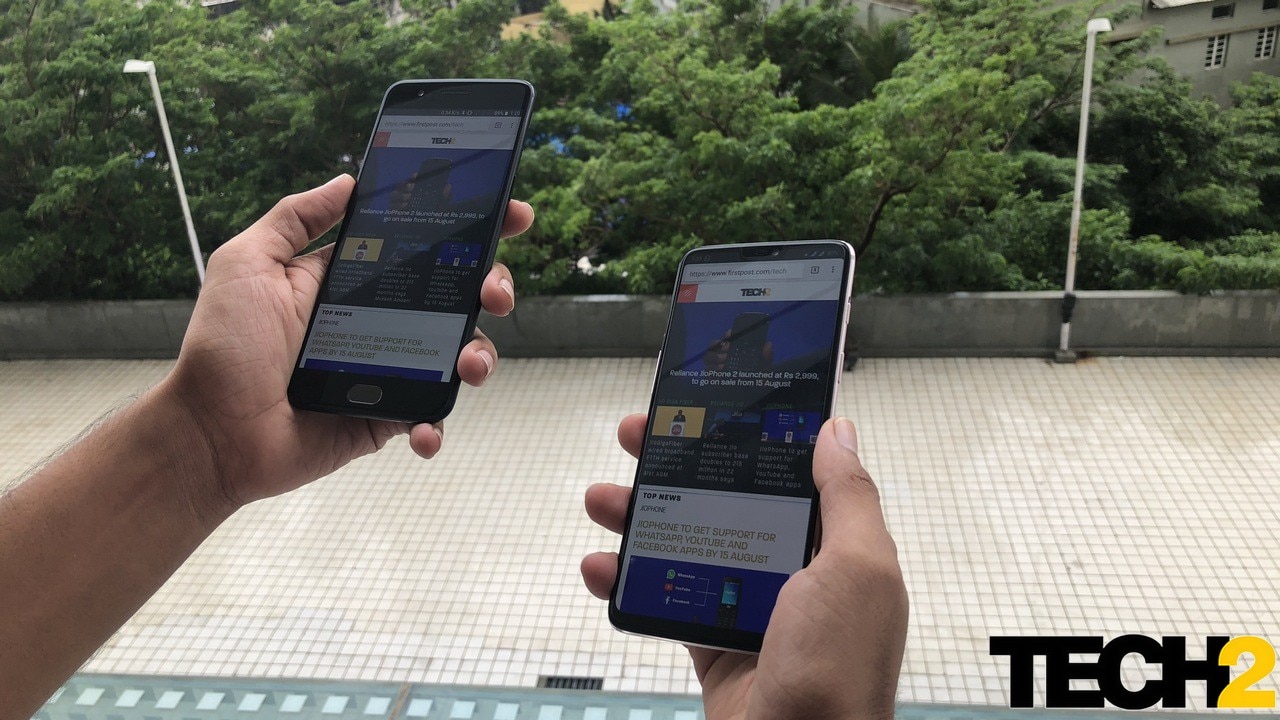 Over the month of May, the only slogan you could hear everywhere was "The Speed You Need". The Speed. OnePlus 6 smashed records after it went on sale in mid-May 2018 and it's USP? The mind-blowing performance for the price it was being offered at. People were raving about how it was one of the greatest flagship smartphones ever. It was hard to argue with the fact. OnePlus 6 combined some insane specs and bundled it in a price that was significantly below its competition. Notch or no-notch, OnePlus 6 became the new poster child for OnePlus and instantly was one of the most desirable devices. 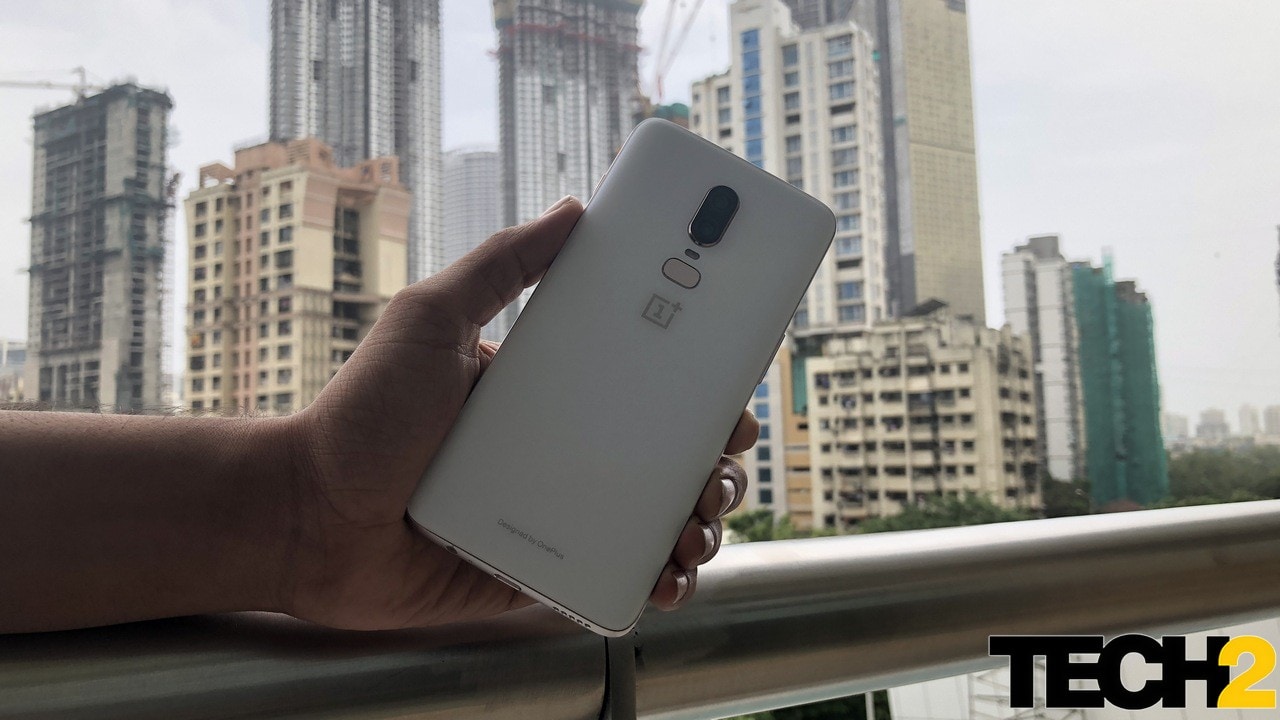 As a fan of OnePlus, it was but obvious that I wanted to get my hands on the device. Working as a reviewer, the chance of using the phone completely for my own came in the form of the newly launched Silk White colour variant of the OnePlus 6. It would seem that my wildest dreams had come true.

I was getting to use the most talked about Android smartphone as my daily driver. But there was another angle. As a longtime user of the OnePlus 5, it was an opportunity to take a hard look if I really wanted to move on from it. It was, as I had said earlier on an amazing device. I believed that the OnePlus 6 was enough to convince me to leave the OnePlus 5. But did it?

Let me be quite clear. Both the devices are exceptionally fast. In my 10 months of using the OnePlus 5, I hardly remember a time when the device hung up or or slowed down and I have put it through the grind. More than what an average smartphone user would anyway. I have no complaints about either phone's performance.

My OnePlus 5 packs in a cool 8 GB of RAM, 128 GB of storage and is powered by a Snapdragon 835 chipset. Games like Asphalt, PUBG, Modern Combat were buttery smooth even on the highest graphics settings, while heavy apps like Facebook and Snapchat ran without a hitch. Oxygen OS was as close to stock Android as you can get. Now I know that OnePlus was caught cheating on benchmarks with the OnePlus 5. But in my time with the OnePlus 5, I never once felt the need to upgrade to another device because the OnePlus 5 itself was a great device.

The OnePlus 6 admittedly is no different. Three weeks isn't as long as 10 months but I can say that the OnePlus 6 isn't as fast as I had hoped it would be. Sure it's a tad bit faster than the OnePlus 5 and that is because of the new Snapdragon 845 chipset. But it doesn't give that mind-boggling speed that would make me ditch my OnePlus 5.

To that end, as far as benchmarks are considered, the OnePlus 6 wipes the floor with the OnePlus 5 and other competitors such a the Huawei P20 Pro or the Galaxy S9. In real life, however, there seems to be a negligible difference in performance as compared to the OnePlus 5. In connection to the battery, I saw that the OnePlus 5 had more juice than the OnePlus 6, but that could have been due to the bigger screen on the latter.

Yeah, it's there on the OnePlus 6 and obviously, this isn't news. Chinese smartphone makers have become quite adept at aping the iPhone X notch at every turn. That doesn't mean we have to like it. I certainly don't. It's annoying and it eats into any video I'm watching on full-screen. However, OnePlus' software optimizations do provide you the option of removing the notch. My question is why include one in the first place if you needed to put a software bezel to hide it? Apart from that, the OnePlus 6 has the same AMOLED display like the OnePlus 5, albeit a bit taller. In retrospect, the OnePlus 6 display isn't even tall enough to make much of a viewing difference for me. Remember that feeling when you start switch to a bigger screen phone and suddenly when you look at your previous smaller screen phone you feel that the text on the latter is much smaller than you remember? I didn't get that when I switched back from the OnePlus 6 to the OnePlus 5.

Removing the notched area, the OnePlus 6 screen measures 6.1-inches diagonally which is bigger than the 5.5-inch of the OnePlus 5 but not enough to make a significant difference in my opinion.

However, while I'm browsing through the phone there's something disconcerting about a tall display. I have to stretch my thumb painstakingly high to drag the notification tray down on my OnePlus 6. On the OnePlus 5, the movement is quite easy as the display is just the right size for my hand. It is these small things in a phone that can make or break it. I'm not saying that the OnePlus 6 display is too big. I'm just saying that in my opinion, the OnePlus 5 display is more user-friendly than the OnePlus 6.

OnePlus 5 was marketed as a revolutionary camera phone. In our review, we found out that the phone had a decent camera which performs poorly in low light. While the latter half is true, calling the OnePlus 5 camera now as only decent is quite undermining. I will admit that when it was earlier launched, the OnePlus 5 did not have the best of cameras in its price segment. However, after months of updates, I can say that the OnePlus 5 now takes amazing photos. It is still nowhere in the league of the Pixel 2 or the iPhone X or the Galaxy S9 Plus, but these smartphones cost nearly 20,000 to 30,000 more than the OnePlus 5. The OnePlus 6, in my humble opinion, hasn't been able to impose itself over the OnePlus 5 in terms of photography. I mean sure the OnePlus 6 has 480 fps video recording capability and OIS in one of its sensors. But this will only be useful to people who shoot a lot of video with their smartphones.

I'm not one of those people. I come in the standard category of users that favour photos over videos. In that respect, the pictures snapped by both the OnePlus 5 and OnePlus 6 are nearly the same. Slightly better low light photos can be expected from the OnePlus 6 but that is because it has wider aperture on the secondary sensor. Front facing cameras on both devices are identical.

A blind photo test between the two devices should make it more clear. Below are a set of same images that have been taken from the OnePlus 5 and OnePlus 6. Let's see if you can spot which phone took which. 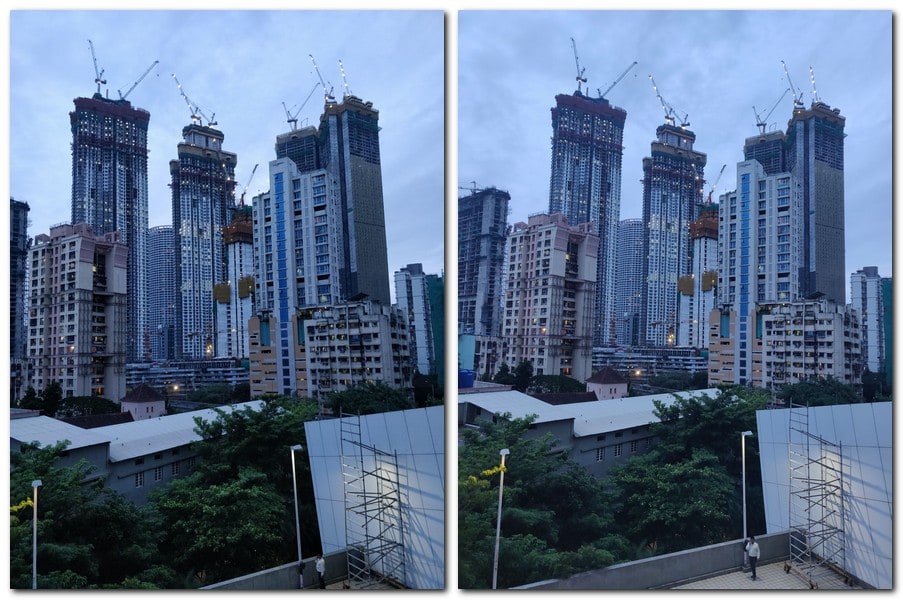 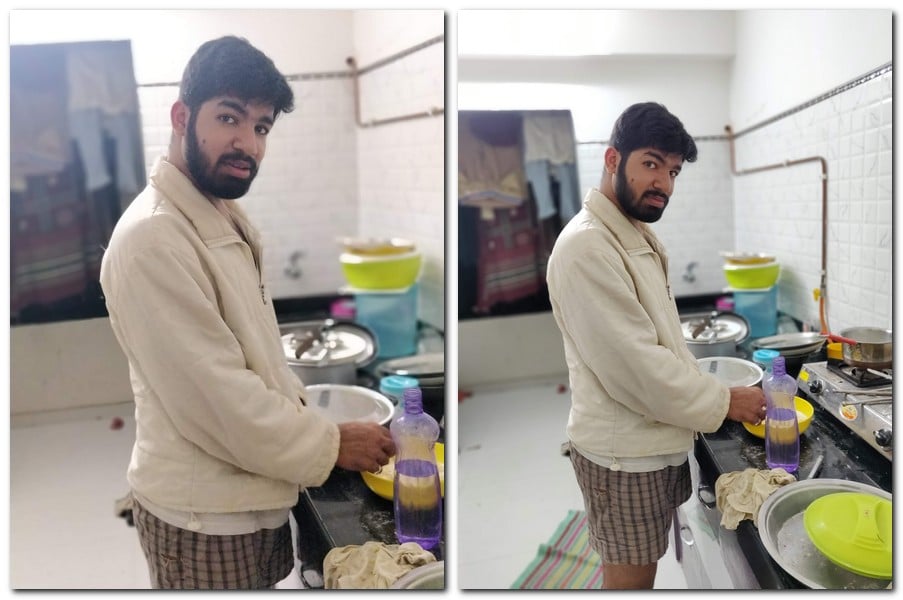 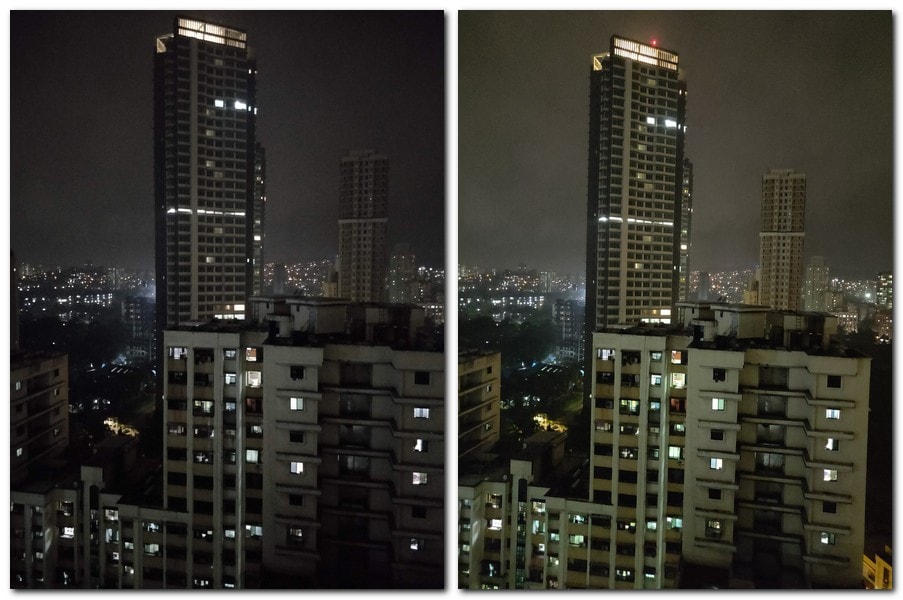 Hard to make a judgment? The left side images are OnePlus 5 and the right side is OnePlus 6. I'll leave it for you to decide which one is better. If you would like to see the high-res images of both these smartphones, you can check out the Flickr link below. The OnePlus 5 had a metal back. This gave the phone more resilience, sturdiness and made it less slippery. The OnePlus 6 with its glass back is not only less resilient (glass is fragile and metal is not) but the phone is quite slippery indeed. Matter of fact if I hadn't put a case on it, I'm quite sure that I would have cracked the glass on the back. Also, the OnePlus 6 is also significantly heavier than my OnePlus 5 which is slightly offputting for me. Don't get me wrong. I love the OnePlus 6. But then again I love nearly everything OnePlus does (not the OnePlus 2). As a user of the OnePlus 5, I feel that the device is a compact, sleek and a powerhouse of a device. It is efficient in performance and even after 10 months of usage and it still gives me at least a day's battery.

The OnePlus 6 also happens to be a truly amazing device. The bigger display, camera tweaks and a glass back make it an extremely enticing option for buyers. But does the phone offer such an immense upgrade that I part from the already amazing OnePlus 5? I don't think so.