Apple created the Everyone Can Code curricula so students from kindergarten to college and beyond can learn and write code using Swift.

With an aim to offer students with disabilities an opportunity to learn the language of technology, Apple is bringing an accessible coding programme to schools serving the blind and deaf communities, first to the US and then to more schools around the world. 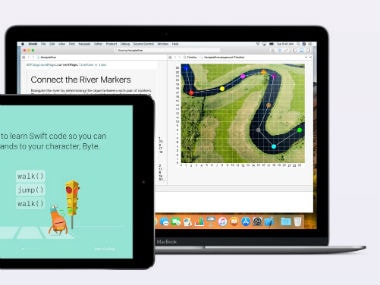 Apple's Everyone Can Code will help those who are blind or deaf. Apple.

Beginning this autumn, US schools supporting students with vision, hearing or other assistive needs will start teaching the 'Everyone Can Code' curricula for Swift—Apple's intuitive programming language, the Cupertino, California-headquartered tech giant said in a statement on 17 May.

"We created Everyone Can Code because we believe all students deserve an opportunity to learn the language of technology," Cook said. "We hope to bring Everyone Can Code to even more schools around the world serving students with disabilities," he added.

Apple created the Everyone Can Code curricula so students from kindergarten to college and beyond can learn and write code using Swift. With teacher guides and lessons, students learn the basics on iPad with Swift Playgrounds which lets them use real code to solve puzzles and control characters with just a tap.

Besides facilitating to App Development with Swift, it can also help aspiring app developers build their first iOS apps. Apple said it collaborated with engineers, educators, and programmers from various accessibility communities to make Everyone Can Code as accessible as possible and will work in close coordination with schools to augment the curricula as needed.

This will include providing additional tools and resources such as tactile maps to enhance the understanding of coding environments for non-visual learners, it added. The Everyone Can Code curricula is compatible with VoiceOver, an advanced screen-reading technology for people who are blind or have low vision.

VoiceOver is a gesture-based screen reader that describes nearly everything happening on your screen.

With VoiceOver integration, Swift Playgrounds can take students step-by-step through learning Swift, all without needing to see the screen.

Accessibility features for people who are deaf or hard of hearing include FaceTime for capturing every gesture and facial expression, Type to Siri, closed captions, LED Flash for Alerts, Mono Audio and Made for iPhone hearing aids.

The tech giant said that iPad and Everyone Can Code can also be used by students with physical motor limitations through Apple's built in Switch Control, which enables switches, joysticks and other adaptive devices to control what is on your screen.