Ahead of its 26 November launch, Gionee has teased Gionee F205 and F6, which are among the 8 bezel-less smartphones which would be launched in Shenzhen in China. 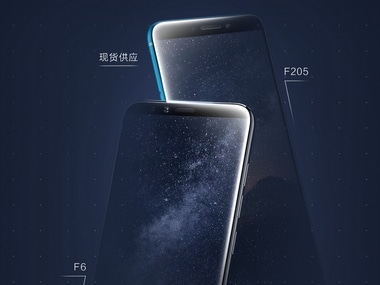 According to a report first published by GSMArena, the Chinese smartphone maker has revealed two of its smartphones in a poster teaser in its official Weibo account. There are two poster teasers which have been posted on social networking website. Out of them, one reveals details about the F205 and F6, while the other has the names of the smartphones which would be launched at the event.

The other smartphones which would be launched alongside F6 and F205 are the M7 Plus, S11, S11s and Steel 3.

According to rumours, it is expected to come with a quad-core CPU and 2 GB of RAM.

Evan Blass, a tipster, had revealed the flagship phone of Gionee and one that is touted to be Gionee M7 Plus.

Recently, the Gionee M7 was launched in India on 15 November. It was launched at a price of Rs 16,999 with a 3D photo feature. The device comes fitted with a 13 MP rear camera, 8 MP front camera and a massive 5,000 mAh battery. The device is powered by Qualcomm Snapdragon Octa-core Processor and paired with 4 GB RAM and 64 GB ROM that is expandable up to 256 GB.

Gionee had in the past had showcased its first 'Made in India' smartphone in Vizag. The company's F series, F103 was launched as the first Made in India phone by Foxconn in SriCity. The 'Made in India' device was available at a price of Rs 9,999 and sports a 5-inch HD IPS display with 1,280 x 720 pixels resolution.