Vinesh Phogat during the World Wrestling Championships in Belgrade on Wednesday. Screenshot/UWW

Kolkata: Vinesh Phogat added another feather to her cap in 2022 as the decorated Indian wrestler won the World Wrestling Championships bronze medal in Belgrade after becoming the triple Commonwealth Games champion earlier in Birmingham. The 28-year-old athlete defeated Sweden’s Jonna Malmgren 8-0 in the final of the 53kg repechage round to become the only Indian woman to win two medals at the toughest wrestling event after, if not at par with, the Olympics.

Speaking to Firstpost after her bronze medal bout, Vinesh said the victory ended the disappointment of her last year’s debacle at the Tokyo Olympics, where she made a shocking second-round exit despite being the prime medal contender.

“This medal somewhere fills that void of disappointment left after the Olympic defeat. The Commonwealth Games gold medal meant a lot too but for a wrestler with years of international experience, just one World Championship medal (bronze in 2019 Nur Sultan)  was never enough.”

Back in 2021, Vinesh, who was ranked World No. 1 months before Olympics, had to face backlash after returning empty-handed from Tokyo. The remainder of the women’s squad also drew blank while Ravi Kumar Dahiya and Bajrang Punia bagged medals. Vinesh also later spoke out about the trauma she faced post the quadrennial event.

In Belgrade a day earlier, trouble was not far from the current World No. 15 either as Vinesh made a shock qualification round exit at the hands of Mongolia’s Khulan Batkhuyag. The eventual silver medallist triumphed in the bout 7-0 against Vinesh. However, luck favoured the Indian soon as she entered the bronze medal rounds via repechage. 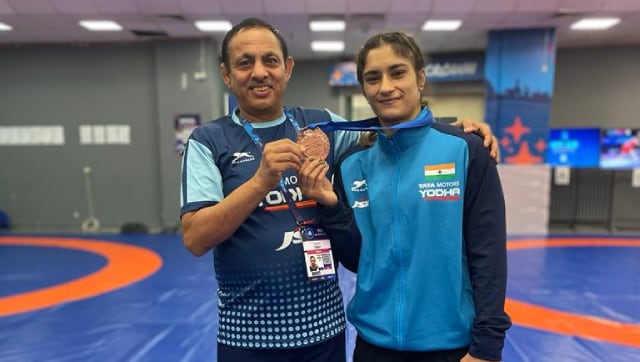 Vinesh dominated the repechage rounds on Sunday as she pinned two-time World Championship medallist Zhuldyz Eshimova of Kazakhstan in the first bout, followed by a walkover win over Azerbaijan’s Leyla Gurbanova, to set up a final clash with reigning European champion Malmgren.

The Indian eventually defeated the 21-year-old Swedish with command in the decider to take the bronze. The medal, however, came after some intense preparations before the final as Vinesh slept the night before skipping her meal and water as well, revealed Wrestling Federation of India senior coach Randhir Malik.

“The day earlier she couldn’t compete well because her body didn’t recover well after the weight cut (the intense training regime of losing weight before the official weigh-in ahead of the competition),” Malik said from Belgrade. “It happens sometimes with wrestlers and unfortunately it was Vinesh’s bad luck on the day. But she is a dedicated girl and knew what was at stake. She had Tuesday’s evening and today’s (Wednesday) morning to be prepared for the bout and Vinesh sweat it hard in both the sessions to be ready.”

When Vinesh was asked if wounds from the past opened up and forced her to work harder for the rounds, the experienced wrestler calmly said she has taken her lesson well from the past and chose to stay focussed on her objective.

“I have learned from the past that people are going to speak after my loss. But it was important for me to keep myself focussed on the matches today as I knew I still have a chance to win the medal,” said the wrestler.

The last few months were also quite intense for the wrestler as she had to prepare for back-to-back two big-ticket events for the season. Sandwiched between the CWG and Worlds were also the much-anticipated WFI trials bout against her new-found rival in teenager Antim Panghal, who gave her a run for the money at the CWG trials earlier and further proved her credential with the historic U-20 Worlds title. Vinesh put on a splendid display to defeat the 17-year-old rival and stamped her authority as undisputed No. 1 in India in her category.

Prior to her departure to Belgrade, Vinesh said she wants to take a break as her body needs to recover but would take a call soon on whether to participate further participation in domestic tournaments, including National Games, for the year.

“Once I’m done with the World Championship, I may take a break because my body needs some rest and recovery now. I am not sure yet if the season will be over for me as I will take a call on participating in National Games and other events but will surely take some days off for recovery, ” Vinesh said earlier.

It was a second consecutive defeat for Vinesh against the Japanese this season after losing to the two-time world champion at the Asian Championship in China.

Ace women wrestlers Sakshi Malik and Vinesh Phogat on Friday made the cut in the Indian squad for the World Wrestling Championship, to be held in Paris next month.

Vinesh tweeted: "There was lot of talks post Rio Olympics that our system needs to change. Did anything happen? "If we are not ready to accept that there is a problem that we need to tackle, what happened in Paris last week would happen once again."