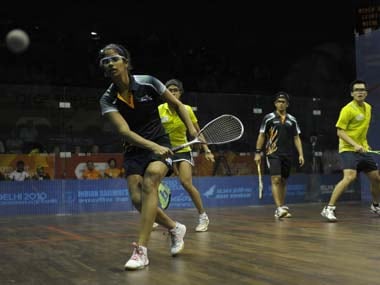 Joshna, seeded 12, had made a cautious start to the tournament when she got past Japan's Misaki Kobayashi in straight games 13-11 11-8 12-10 earlier.

The eighth seeded Waters, who has never lost to Joshna in their five earlier meetings, failed to overcome the challenge from the Indian. Joshna made a good start by annexing the first game comfortably before Waters made a strong comeback by clinching the next two games.

However Joshna, known for her ability to fight back, started to control the strokes and found the placements to emerge victorious in a contest that lasted over an hour.

Joshna, who has entered the quarterfinals for the first time since her first appearance in 2008, will next face either Emily Whitlock of England or second seed Camille Serme of France.

Joshna has earlier had only one win over Emily, while Camille was the winner in all previous four meetings.

The other Indian, Dipika Pallikal Karthik was unlucky to face the formidable Nicol David of Malaysia in the first round and she went down 11-9, 12-10, 11-6.