New York: Kevin Durant and Trae Young will lead a 16-player field of NBA players in an NBA 2K20 tournament airing on ESPN.

The NBA, the players’ association and 2K announced the NBA 2K Players Tournament on Tuesday. Play begins Friday, and the winner of the week-long competition will receive a $100,000 donation to a coronavirus-related relief effort of their choice. 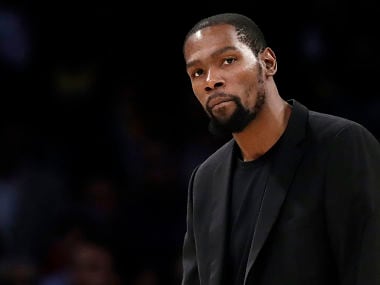 Player have been seeded according to their NBA 2K player rating — from Durant’s 96 down to Derrick Jones Jr.’s 78 — and tenure. Durant, the Brooklyn Nets star who sat out this NBA season due to injury, will face Jones in the first game Friday night. Other matches will air on ESPN2. The championship is set for 11 April.

Participants will each select a pool of eight teams prior to the tournament and can only play with each club once throughout the tournament. Rounds one and two will be single elimination, and the semifinals and finals will be best-of-three.

The NBA has been shut down since 11 March, the night that Utah center Rudy Gobert became the first player in the league to have a positive diagnosis for the virus revealed. The league is still discussing scenarios for resuming play once allowed.