It was the toughest and most emotional victory, says Sharapova

Maria Sharapova had given warning that she was ready for a three hour French Open final - and she was true to her word, stopping the clock at three hours two minutes to lift the trophy.

After her three previous rounds also went to three sets, it seemed almost inevitable that Saturday's match would go the distance, especially as wily Romanian Simona Halep was well capable of making the Russian run as they traded baseline shots. 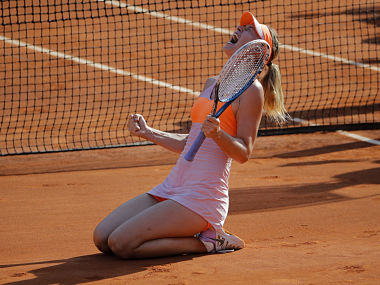 Maria Sharapova of Russia reacts after winning her women's singles final match against Simona Halep of Romania at the French Open tennis tournament at the Roland Garros. Reuters

"It's the most emotional victory for me. The toughest one physically that I've come across in a final, especially a grand slam. There is not too many finals that you get past three hours," she told reporters after beating Halep 6-4 6-7(5) 6-4.

Showing her never-say-die attitude, she has now won 27 of her last 28 matches on clay decided in three sets, including 20 straight wins. Her last three set loss came at Roland Garros in 2010 against Justine Henin.

As if she had known the script already, she said after her three-set semi-final victory over Canada's Eugenie Bouchard: "Well, I would love to win those matches in two sets, but I always feel like I put in the work to be ready to play whatever it takes.

"If it takes three hours to win the match in three sets, I will be ready for that."

Saturday's final was the longest women's shoot-out in Paris since 1996, when Steffi Graf beat Arantxa Sanchez-Vicario 10-8 in the final set at three hours and four minutes.

All this comes after Sharapova missed part of last season with a shoulder injury and 10 years after she bagged the first of her five majors at Wimbledon at the age of 17.

"It's incredible to be sitting here 10 years after my first grand slam win, and to think that I now have five," she said.

"At that stage you're 17-years-old, and of course you think it was a great tournament, obviously. Can I do that again? Can I win more majors? You always have those question marks."

At times there were serious questions on the Philippe Chatrier court, including 12 double faults, and losing four points in a row to lose the second set tiebreak when she had held a 5-3 lead - acknowledging that "mentally, that's extremely challenging".

"So much adversity is thrown at you, and I'm just proud I came through and I adjusted in all different situations and I end up with this," she smiled, pointing to the trophy.

Saturday's win does not diminish the hunger for more, however long it takes.

With Wimbledon up next as the tour makes its brief swing onto grass, there is always the chance of regaining her title 10 years after she beat Serena Williams.

"I don't care what my results were in the past, you start from a clean slate that's how I go into a grand slam," she said.

"You have to go out there hungry and want to compete for more. Even though you always remember those incredible moments of holding that trophy, you got to try to erase that from your mind because you got to create new ones."