IPL 9, RPS vs KXIP as it happened: Dhoni pulls off miraculous win for Pune

We're just as surprised as you are!

OUT! And its a third wicket within a space of a few deliveries, as Irfan Pathan gets a bottom-edge off a slow bouncer from Dhawan, with wicketkeeper Saha running down from his position and diving forward to complete a fine catch! Pathan departs for 2, as RPS lose their fifth wicket with 86 on board.

Just three concedede by Kyle Abbott in the 10th over, with RPS reaching 62/2 at the halfway mark. Not a very good progress at all, if they are to chase down what is a competitive target. Glorious drive by Khawaja in the following over, getting his first four of the innings! Tiwary muscles a flat six over cow-corner in the first ball, followed by a wide, before miscuing the next delivery towards deep cover, where Behardien holds on to the catch! The nightmare continues for Pune in the same over, as Khawaja holes out to Miller at deep square-leg to depart for 30 off 29 balls, with Punjab in firm control of the proceedings right now! Pune need 92 off 48 balls!

OUT! And it's Axar who gets the second wicket with some sharp turn! Bailey misses the line of the delivery, and lunges forward in the process, with his foot of the crease. Keeper Saha whips the bails off in a flash, as Bailey is removed for 9 with RPS losing their second wicket with 47 on board.

OUT! Sandeep draws first blood as Rahane departs for 19 off 15, nicking the delivery that was moving down the leg side to the wicketkeeper. RPS lose their first wicket with 35 on board!

OUT! And it's raining wickets at the moment! Perera comes in to bowl the final over of the day, and Axar goes for the big hit towards cow-corner. Chahar however, manages to grab the ball right outside the boundary rope. Realises he is about to cross the boudary rope, and throws it to Saurabh Tiwary, who was smartly backing up for Chahar. Axar goes for 1, as KXIP lose their 7th with 160 on board.

OUT! Behardien's brief stay at the crease comes to an end, as Behardien gets caught by Rahane at long-off off a back-of-the-hand slower ball from Dinda. Departs for a run-a-ball 5, as KXIP lose their sixth wicket with 160 on board!

OUT! Ashwin goes for a six and four in his first two balls of the final over, before incuding Gurkeerat to get a top-edge towards Deepak Chahar at backward square-leg for the batsman to depart for 51 off 30 balls! KXIP lose their fourth wicket with 150 on board!

OUT! Ashwin goes for a six and four in his first two balls of the final over, before incuding Gurkeerat to get a top-edge towards Deepak Chahar at backward square-leg for the batsman to depart for 51 off 30 balls! KXIP lose their fourth wicket with 150 on board!

Fifty for Gurkeerat in just 29 balls! Absolute carnage so far in the innings! Hammers a six and a four at the start of Ashwin's final over to get to the milestone!

OUT! Ashwin gets his second wicket of the day, and gets rid of KXIP skipper Vijay for 59, with Punjab losing their third wicket with 123 on board! Quicker one from Ravi, pitched between middle and leg, the ball straightens and beats the bat of Vijay — who looks to play across the line — before crashing onto the stumps. End of the dangerous-looking third-wicket stand.

Fifty for Murali Vijay! Yet another captain's knock, and Vijay's form with the bat has only improved by leaps and boundas since becoming captain! Sixth fifty for the KXIP skipper!

OUT! Another spinner does the trick, as Aussie youngster Adam Zampa strikes in his third ball of the day. Saha looks to cut the delivery pitched outside off, but ends up edging it towards the slips, where the ball lands in the palms of Ashwin. Saha departs for 3 off 4 balls, as KXIP suddenly lose two wickets for just five runs, both to spinners.

OUT! The slow surface does the trick, as R Ashwin gets the breakthrough in his first over of the day! Amla looked to play the ball, that stayed low, towards midwicket, where George Bailey leaps up to complete the dismissal. The South African opener has to depart for 30 off 27 balls, as KXIP lose their first wicket with 60 on board.

Kings XI Punjab have won the toss, and skipper Murali Vijay has elected to bat first.

That's it from us for the match between Rising Pune Supergiants and Kings XI Punjab, with the latter unfortunately finishing at the bottom of the table. Time to shift our focus towards the next game on the cards, which is between Gujarat Lions and Mumbai Indians, the link of which is given below.

That's it from us for the match between Rising Pune Supergiants and Kings XI Punjab, with the latter unfortunately finishing at the bottom of the table. Time to shift our focus towards the next game on the cards, which is between Gujarat Lions and Mumbai Indians, the link of which is given below. 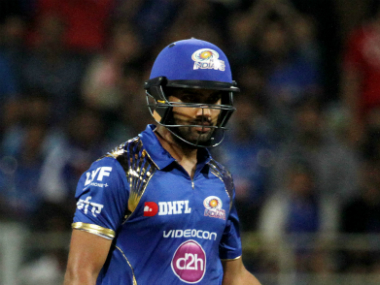 We're just as surprised as you are!

23 runs were required off the last over. No one gave @msdhoni a chance. And he did what he does best. SILENCE THE CRITICS. #RPSvKXIP #BOSS

Ladies and Gentlemen! We may have very well witnessed the greatest final over in #IPL2016 so far! 12 off the last two balls, and Dhoni smashes two sixes to finish in his typical style! Helps Pune finish on the seventh position!

Playing for pride, a canine intruder, and a Dhoni finishing masterclass. Have we just witnessed the greatest ever #IPL final over? #RPSvKXIP

"If 15 runs are needed off the last 6 balls, the pressure is on the bowler and not on MS Dhoni."

Superb. Brought back memories from that Clint McKay over.

Axar to bowl the final over! Dot off the first ball, with Dhoni refusing to go for a single. Wide off the 2nd! 22 needed off 5 now! SIX! Massive one by Dhoni over midwicket! Just what the doctor ordered! 16 off 4. Outstanding fielding by Amla at deep cover to save four runs, with Dhoni refusing to go for the run! FOUR! Short and wide, and Dhoni muscles the next one over wide long-off for a one-bounce four! Fifty for Dhoni as well in 30 balls! SIX off the fifth ball! Can Dhoni pull off a miraculous win? Six off the last ball now! SIX OFF THE LAST BALL! DHONI PULLS OFF AN INCREDIBLE WIN FOR PUNE!

Preview: Two bottom-placed teams, Rising Pune Supergiants and Kings XI Punjab will aim to end their turbulent Indian Premier League (IPL) campaign with a win when they take on each other here on Saturday.

Both debutants Pune and Punjab have eight points each and are placed in the seventh and eight spot respectively on the league table -- the former are ahead on better net run rate. A win will help the teams avoid the last spot and it can be a big motivation. Both the sides are out of the race for the play-offs but the cricketers in each side will like to give respite to their shattered reputation in their final league game.

Pune are coming into the match with a comprehensive win over Delhi Daredevils and that should give confidence to the Mahendra Singh Dhoni-led side.

Having lost their premier foreign recruits -- Steven Smith, Faf du Plessis, Kevin Pietersen and Mitchell Marsh -- to injuries, the side's batting has revolved around the ever-dependable Ajinkya Rahane (461 runs). The Mumbai right-hander has six fifties so far and will look to continue the good work.

Skipper Dhoni, Saurabh Tiwary and all-rounder Thisara Perera have been mostly inconsistent in their contributions. The focus will also be on Australian batting duo of Usman Khawaja and George Bailey.

The bowling will be led by off-spinner Ravichandran Ashwin, who has been a shadow of his impressive self in the tournament so far.

Leg-spinners Murugan Ashwin and Adam Zampa will once again be Dhoni's go-to bowlers along with the pace duo of Ashok Dinda and R.P. Singh.

Zampa has been their find of the edition and the young Australian leg-spinner will look to add more to hsi tally of 11 wickets from four outings in order to impress his national selectors.

Pune's opposition Punjab will also look to avoid thw wooden spoon for the second successive edition. They also had finished last in 2010.

This edition even a midway change in captaincy -- replacing David Miller with Murali Vijay -- din't help them as they faltered due to the batting failures.

The team's batting will depend on Vijay and Protea Hashim Amla, who hit a brilliant 96 in the match against Sunrisers Hyderabad.

With Glenn Maxwell out of the tournament, David Miller, stumper Wriddhiman Saha, all-rounder Marcus Stoinis are expected to bolster the middle order.

The bowing will centre around seamers Sandeep Sharma (14 wickets) and Mohit Sharma (12 wickets). Left-arm spinner Axar Patel with 12 wickets, including a hat-trick, has not been bad either but somehow failed to click as an unit.