Lausanne (Switzerland): Olympic chiefs met Friday to consider recommending that hosting rights for the 2024 and 2028 Games be awarded simultaneously, a landmark step that could hand winning bids to rival candidates Paris and Los Angeles.

The International Olympic Committee's executive committee came together in Lausanne where it will receive reports from a working group that has studied the idea. 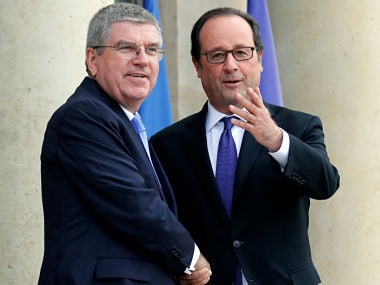 "I assume it will be a very interesting meeting," said IOC president Thomas Bach.

"We will deal today with some interesting issues, it is such a rich programme."

If endorsed, the proposal will go to a vote of the IOC's roughly 100 members next month for final approval.

With that hurdle cleared, the IOC's main meeting in Lima on 13 September would then hold a double vote to award both the 2024 and 2028 Games.

The plan fits the IOC's effort to make Olympic bidding less costly, with cities often spending tens of millions of dollars only to come up empty handed.

Hosting the Games has also become an increasingly daunting prospect for cities, with fewer willing to take on the vast expense.

The IOC is therefore anxious to lock in two low-risk, high-quality bids from cities with a record of successfully staging major sporting events.

IOC chief Bach has complained that there are "too many losers" in Olympic bidding and has voiced support for both Paris and Los Angeles winning the right to host the Games.

While the idea of a double vote in the Peruvian capital is gaining traction, a fierce battle is continuing over which city gets to go first.

Also on the IOC's agenda is a change to the bidding process for the 2026 Winter Olympics, with Sion (Switzerland), Calgary (Canada), Innsbruck (Austria) and Stockholm having so far shown interest in hosting.

The IOC will also nail down the scheduling for the 2020 Summer Olympics in Tokyo, where five new sports (climbing, surfing, skateboard, karate, baseball/softball) will be admitted. The executive committee faces the delicate task of juggling the number of overall events while keeping the number of athletes at 10,500.

In a push for gender equality, there is also expected to be a push for a mixed sex 4x100m relay introduced in athletics and something similar in swimming.