Cuttack: Yuvraj Singh and Mahendra Singh Dhoni turned back the clock to spank blistering centuries and lift India to a formidable 381 for six against England in the second one-day international Thursday.

The 35-year-old Yuvraj made his highest ever ODI score as he reached 150 while former captain Dhoni made 134 as the pair put on 256 runs in a record fourth-wicket stand against England.

India, who were put into bat after losing the toss, had been in trouble after their captain Virat Kohli was dismissed cheaply to leave the score at 25 for three. 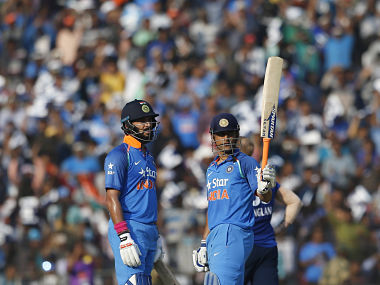 But Yuvraj and Dhoni then set about the English bowling attack with relish, delighting a sell-out crowd at Cuttack's Barabati Stadium.

Fast bowler Chris Woakes, who took four wickets, was the pick of the England bowlers and he claimed the prized scalp of Kohli for eight.

With openers Lokesh Rahul (five) and Shikhar Dhawan (11) also back in the pavilion, the task of reviving the innings then fell to India's two most experienced batsmen.

The left-handed Yuvraj, who is making a comeback in the ODI side after a gap of three years, whacked three boundaries off a Jake Ball over to signal his intent early in his innings.

Yuvraj who last scored a hundred against West Indies in the 2011 World Cup, recorded his 14th ODI century as he smacked 21 fours and 3 sixes in a 127-ball knock.

In the process, he overtook the great Sachin Tendulkar's record run tally in ODIs against England and he has now accumulated 1,478 runs in 36 matches.

Dhoni had a relatively sedate start, seeing out two maidens before boosting his confidence with a couple of boundaries.

The wicketkeeper-batsman, who survived a dropped catch on 43, made the most of the reprieve to post his 10th ODI hundred as he hit 10 fours and 6 sixes.

Yuvraj was caught behind off Woakes while Dhoni fell to Liam Plunkett but their departure was scant consolation to the England bowlers who were all carted around the park.

India, who won the opening ODI in Pune, are looking to seal the three-match series ahead of a three-match T20 series.