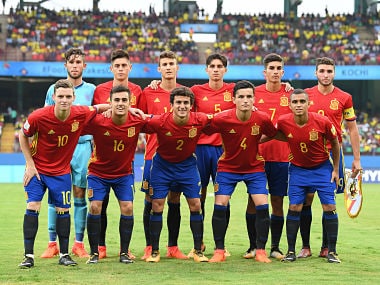 Click here for live score and updates from the match between Costa Rica and Guinea.

Preview: Hot favourites Spain would look to bounce back from their opening match defeat to Brazil and bag a win when they cross swords with African debutants Niger in a group D match at the Jawaharlal Nehru International Stadium on Tuesday.

Spain were beaten 1-2 by the South American champions fellow favourites Brazil in their first outing.

After taking an early lead, they conceded two goals to face defeat. Now they will have to get their act together as any slip-up against Niger would further dent their chances of qualifying from the group.

Spain have the likes of Barcelona's youth team player and captain Abel Ruiz and Valencia starlet Ferran Torres and will bank on them to deliver the goods.

Ruiz is an attacking player and was one of the La Masia talents courted by top premier league clubs like Manchester City, Arsenal and Chelsea.

He racked up a record 16 goals in the recently-concluded Euro U-17 competition and is considered one of the most exciting talents in the country.

Torres is another star in the making at the moment and two La Liga giants — Barcelona and Real Madrid — have shown interest in the young striker.

Niger, on the other hand, will have nothing to lose and will go into this tie upbeat after their maiden win in the U-17 World Cup against North Korea in their campaign opener.

In the match against North Korea, Niger were no doubt the better side with more possession and more shots on target.

They deservedly won with Salim Abdourahmane scoring the all-important goal in the 59th minute.

But it will be a completely different ball game for Niger when they face the formidable Spaniards, admired for their flair.