Dangal actress Zaira Wasim has found herself in the midst of a fresh row after engaging in a war of words on Twitter with sports minister Vijay Goel.

The exchange began when Goel, who was inaugurating The India Art Festival in Delhi on 19 January came across a painting that he felt reminded him of the story of 'girls like Zaira'. The painting in question showed a girl in hijab, while in the foreground, a young girl sits trapped in a birdcage.

Goel tweeted an image of the canvas, along with the words, "This painting tells a story similar to Zaira Wasim's. पिंजरा तोड़ कर हमारी बेटियां बढ़ने लगी हैं आगे | More power to our daughters!"

Wasim, however, was not appreciative of Goel's observations and said as much in her tweets to him.

While the 16-year-old actress' first tweet was later deleted, the second and third were still available on her timeline. In them, she wrote: "Women in hijab are beautiful and free... Moreover, the story depicted through the painting is not even remotely relevant to mine."

Goel backtracked after Zaira's tweets, insisting that it was not his intention to hurt, and she had misunderstood what he was attempting to say. "You have interpreted wrong (sic)," the minister wrote. "I appreciated your work and stated that evil and patriarchal notions must be discouraged." With respect to her final tweet, he wrote, "I'm afraid you still haven't understood. But I wish you all the very best and appreciate your work. Hope to meet and interact too."

Zaira did not reply to the minister's final tweets. 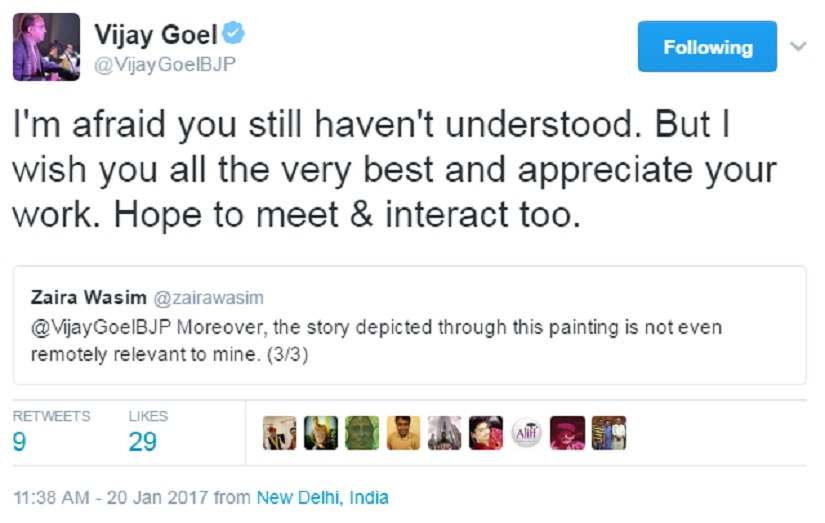 Zaira, who played the young Geeta Phogat in Aamir Khan's Dangal, recently found herself at the end of cyber bullying from trolls after she met with Jammu and Kashmir chief minister Mehbooba Mufti Sayeed. Kashmir has been in a state of unrest ever since popular militant commander Burhan Wani was shot dead by Indian forces. His death sparked anti-India protests in the Valley, leading to a curfew being imposed in the state.

"I know that many people have been offended and displeased by my recent actions or by the people I have recently met. I want to apologise to all those people who I've unintentionally hurt and want them to know that I understand their sentiments, especially considering what has happened (in Kashmir) over the past six months."

Wasim added, "(However) I hope people can also understand there are certain circumstances that emerge which one cannot control. I hope people still remember that I'm a just a 16-year-old girl and treat me accordingly. I'm sorry for what I did, but it was not a deliberate decision and I really hope people can forgive me."

Wasim later deleted her post and put up another another, asking that her apology not be blown out of proportion, reported The Indian Express.

“Regarding my last post, I have no idea why this has become such a big issue. I just wanted to make sure that I did not hurt anyone’s feelings and all of a sudden it has turned into national news. Again and again, I am telling people that I have not been forced into anything by anyone. This was post was not meant against anyone, just wanted to make sure that people were not hurt by what I was doing. From media to everyone else, please don’t blow this out of proportion. Neither was I forced (to apologise) nor am I against anyone. Hopefully this post just stops this once and for all,” Wasim wrote in her second post — before deleting that as well.

She received support from several celebrities after the incident, including Aamir Khan and Geeta Phogat.