When he’s not talking hockey, he is usually thinking about it. Obsession would be too mild a word to describe the idiosyncrasies of Indian women’s coach Harendra Singh. In a career that spans probably 40 years where he played the sport as a junior, then turned out for India at the Asian Games in 1990 and then donned the cloak of a coach, life has been full of steep curves, only a couple of straight lines and some top of the world feelings.

Criticism and praise, two sides of the same coin for most coaches have been constant bed fellows. What has always stood out is his opening line “Bhai sahib, hockey mein kya ho raha hai” accompanied by a beaming smile. He probably tends to forget he is the one standing in the epicentre of the sport. But his first question will always be about hockey. Information is oxygen for him. And that’s why there is no doubt that he inherited a bunch of, you can’t call them rag-a-tag, but talented, direction-less, hungry for success gang of girls cast in his mould. He has given them direction, purpose and made them into a team ravenous for victory, filled with an insatiable appetite to climb the podium. 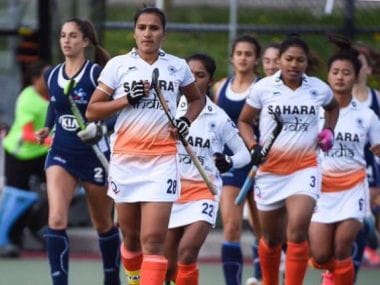 Harendra never believed or thought that one day he would coach the women. It has nothing to do with gender. It probably had more to do with his abilities of transferring knowledge onto a team after coaching men’s teams for almost two decades. He had doubts. It’s a different Harendra now. “I learnt from them,” he says. Appointed as women’s coach in September, 2017, Harendra talks of the changes he underwent as a coach and a person to communicate better. “It has made me a better man and, of course, a better coach,” he says smiling.

At Gold Coast, on the verge of another assignment, the task of winning a Commonwealth Games medal, “gold”, he asserts,  it’s a tough ask. But Harendra’s logic for going to a tournament is simple. “It’s to win and go for Gold. Otherwise, why bother?”

He insists he has the team to achieve it. But first the team has to manoeuvre around Pool A which has Malaysia, Wales, England and South Africa. It’s a tough pool but surmountable. The big teams are England and South Africa. Team captain Rani Rampal believes the winning momentum from the Asia Cup and the Test series against South Korea will help. “The way with we ended with a win in the Asia Cup in 2017, the tour of 2018 Korea tour has also started with a win. We want to continue the momentum, till the end of 2018. We just want to perform to our best in the Commonwealth Games and bring a medal.”

Numbers do hold a place in modern sport. You can always over-ride the past, make it into a non-issue but good coaches and teams do make it into a motivational exercise. Against Olympic Champions England, India has played 27 matches, won two, drawn 6 and lost 19. One of the two wins coming in the 2002 Commonwealth Games final against England; a sure shot source of adrenaline and a fountain-head of motivation. “I do understand that there is always history you need to look at and try and beat the numbers,” says Harendra. “I have the team and they have the ambition to get positive results.”

Against South Africa, we have played 35 matches, won 9, drawn 7 and lost 19. But there has been a shift, a course alteration, a deviation from the usual since Harendra took over. “The Asia Cup was a big test and to qualify for the World Cup was not on the cards,” he says. “But the players, I suspect, surprised after winning the Asia Cup, now want more wins and there has been an aggressiveness that I haven’t seen in an Indian women’s team. At the moment, physically and mentally we are there with the top teams.”

Against Malaysia, India hasn’t lost in 32 matches. They have won 29 and drawn 3. India has played Wales five times, winning 4 with one drawn.

Rani says there is nothing special planned against any of the teams. “We have not planned anything separately. We have to focus on the simple things and not focus on the other team’s strategy and plans. We believe in our training and get the natural results.”

Harendra focuses on psychological ploys away from the training. He believes the team needs to understand that in a male dominated society like India, the players have the opportunity of a life-time to achieve something and make their families proud. “One has to respect that in this team most women have broken age-old taboos of not playing a sport and looking after the house,” says Harendra. “It’s that hunger that is driving them to conquer and leave an impression.”

Goalkeeper Savita Punia returns after being rested for the recent tour of South Korea. In the defence there is enough tenacity and fortitude in the form of players like Deepika, Sunita Lakra, Deep Grace Ekka, Gurjit Kaur and Sushila Chanu Pukhrambam. In the midfield, Nikki Pradhan with her usual guile and stick-work will be the work horse. Nikki comes from the village of Hesal in Jharkhand’s Khunti district. She became the first women hockey Olympian from Jharkhand when she was selected for the 2016 Rio Olympics. It’s a creative midfield with Monika, Namita Toppo, Neha Pradhan and Lilima Minz. It’s in the attack that the team is confident of using the depth in the defence and midfield to convert their chances.  Rani, Vandana Katariya, Lalremsiami, Navjot Kaur, Navneet Kaur and Poonam Rani neither lack the experience or motivation to do something spectacular at the CWG.

Rani who has grown into the role of a play-maker and also the creator of that sublime through pass at crucial junctures, when the opposition defence believes she would go in on her own, allows the other forwards to create space and put pressure on the opposition. The Indian captain also believes that the team has a great set of players with a mixture of experience and youth. Both she and coach Harendra speak highly about the rise in fitness levels. “Hockey has become a speedy game and if you compare from before then our team has improved a lot in fitness and we don’t doubt that we can beat any team in fitness.” Rani also puts forth the argument of having experienced players in the team. “When you play tournaments like the Commonwealth Games, World Cup, Asian Games then experience matters a lot because to handle the pressure of big games you need experience which can help the youngsters and guide them to come out of pressure zones.”

Harendra feels the team has made up its mind to play the CWG final on 14 April. He believes women are more determined and know what to do and when. It’s a different way of examining the strengths of women, physically and mentally, and adapting it to team sport or hockey.

In five editions of the CWG, India have a gold and silver; won in 2002 and 2006 respectively. Its 12 years now that India has come back empty-handed from the CWG. That’s what they said when Harendra took the team to the Asia Cup – ‘it’s been 13 years since we won the Cup’ – India came back with the trophy.

Harendra will once again dip into his treasure box of memories – of victories, defeats, thrilling moments, tears and sadness; he will look for clues, small details, bring back that obsessiveness and provide an answer to the cat calls ‘it’s been 12 years’. He talks about the girls, about 18 players who are raring to go, constantly willing to prove themselves. He doesn't like the word ‘hopeful’ and says ‘we are determined to get the gold.'