Brisbane: Weeks after leading Spain to a Davis Cup title, Rafael Nadal is doing his best to do it again at the ATP Cup, the newest of the men's international team competitions. 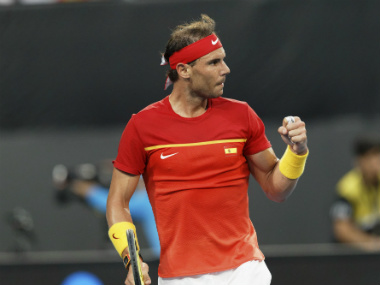 Spain’s Rafael Nadal reacts after winning a point against Uruguay’s Pablo Cuevas during their match at the ATP Cup in Perth. AP

The top-ranked Nadal beat Pablo Cuevas 6-2, 6-1 in Perth on Monday to secure Spain's win in the best-of-three encounter against Uruguay ahead of the doubles. Spain now has two wins from two starts in Group B and next faces unbeaten Japan to determine the first place and automatic qualification for the playoffs in Sydney.

Nadal won his fourth title in the Davis Cup, the traditional men's team competition, in November. He said he thrives in the team environment.

The six group winners and the two best second-place teams qualify for the quarterfinals.

Second-ranked Novak Djokovic gave Serbia a shot at a second victory when he extended his tour-level unbeaten streak against Gael Monfils to 16 wins with a 6-3, 6-2 victory in Brisbane. Benoit Paire had given France the lead with a 6-2, 5-7 (6), 6-4 win in his singles against Dusan Lajovic. The Group A match will now be decided by doubles.

Both countries are 1-1 in the Group E standings, which are led by unbeaten Croatia.

Novak, ranked No 101, said a few pointers from Austria captain Thomas Muster helped calm him down after the first set.

"After the first set I went to a break with Thomas, and I came out and changed a little bit my game and fought back," Novak said. “I think at the end I played really good tennis."

Former US Open champion Marin Cilic had too much experience for No 448-ranked Kacper Zuk, setting up Croatia's victory over Poland with a 7-6 (8), 6-4 win.

Cilic, who has a career-high ranking of No 3 but slipped to 38 after an injury-shortened 2019 season, was only able to convert one of his 13 break-point chances against Zuk, who was making his tour-level debut.

Hubert Hurkacz beat Borna Coric 6-2, 6-2 to split the singles results, but Croatia pair Ivan Dodig and Nikola Mektic clinched the encounter with a 6-2, 6-1 win in the doubles over Hurkacz and Lukasz Kubot.

"If I have to pick some things that I need to do better, it's just converting breakpoints. I had a lot of them," Cilic said. “Otherwise, I felt that the level was quite good.”

Two-time Grand Slam finalist Kevin Anderson led South Africa to victory over Chile in Group A in Brisbane, keeping his team in contention for the playoffs despite an opening loss to Serbia, and Japan clinched its second straight win with victory in both singles matches against Georgia in Perth.

Anderson, who is coming off a six-month injury layoff and pushed Djokovic in two tight sets over the weekend, outclassed Cristian Garin 6-0, 6-3 after Lloyd Harris beat Nicolas Jarry 6-4, 6-4. The South African doubles combination made it a 3-0 sweep.

Anderson said the goal was now to win the last round of the group stage to have a chance of reaching the quarterfinals, which start Thursday in Sydney.

“We had to get a win today, so we were able to do that,” Anderson said. "Some of it is out of our hands as well, already having, well, taking the loss against Serbia. We'll bring back our full intensity for our match against France.”

Japan followed up its 3-0 sweep against Uruguay with its win over Georgia. Go Soeda beat Aleksandre Metreveli 4-6, 6-3, 6-2 and Yoshihito Nishioka upset No 26-ranked Nikoloz Basilashvili 6-2, 6-3. Georgia won the doubles to make the final result 2-1.