Uttar Pradesh Election 2017: How burqas are changing the dynamics of politics in the state

The Bharatiya Janata Party's demand that the Election Commission deploy women police officials at polling booths during the 4 and 8 March voting to check the identity of burqa-clad women in the UP elections has touched upon an emerging issue in Indian politics. JPS Rathore, the vice president of BJP's Uttar Pradesh unit who made the request to the Election Commission in a letter, stated that the "deployment of women police personnel will be justified so that voter's ID could be checked properly and no fake person/woman could cast a vote." 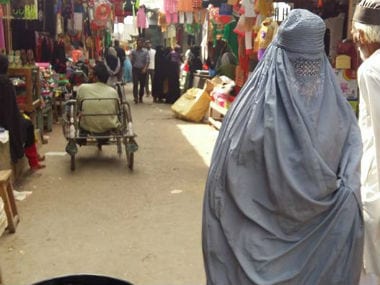 While reports of bogus voting in burqa (Islamic veil) have not been heard of in India, it is not the duty of police officials to check the ID card of voters. Only election officials deployed at polling booths check the ID cards of voters. However, the BJP's demand sheds light on the fact that there is some unease among non-Muslims that burqas could be potentially used to vote on behalf of other voters who may not be present.

During the past few phases of polling in the UP elections, anecdotal reports indicate that some Muslim women defied their male relatives to vote for the BJP because Prime Minister Narendra Modi added his voice voice against the arbitrary practice of instant triple talaq. Anecdotal reports also show that some Muslim women, who may not have agreed with the male members of their families on vital issues like triple talaq, were not allowed to vote.

In such situations, there is a risk that burqas can be misused to vote on behalf of others. There is also a concern that in states like West Bengal where significant numbers of illegal immigrants from Bangladesh have settled, burqas could be used to manipulate votes in favour of political parties of a certain ideological spectrum in coming decades. The BJP's demand also reveals that the rise of burqas in India's towns over the past two decades is causing anxiety among non-Muslims.

This increasing overt religiosity among Muslims usually does not generally concern Hindus but when Muslim women enter shared public space such as a polling booth, Hindus might feel concerned. And political parties like the BJP might feel doubly alarmed since the electoral stakes are high. However, Muslims are likely to see the BJP's demand as an interference in a religious matter, which must not be so because at election booths, there are always women election officials who can verify identities of Muslim women voters coming in burqa to vote. However, a burqa is not simply a piece of cloth. Burqas are ideas. A burqa represents a system of ideas originating from Islam. Its use – justified by the Quranic teachings that women maintain distance from men through curtains and that their voice should not be heard by men – has become overwhelming in the life of Muslim women. Recently, on a trip to the Women's College of the Aligarh Muslim University, a Hindu woman academic was shocked to see that women in the college were wearing burqa despite the fact that there were no men on the campus.

For now, Muslim women in India wear a burqa through which only their eyes can be seen. This cannot be sufficient for election officials to verify the identity of the Muslim women voters wearing burqas. In such a situation, burqa-wearing Muslim women must have no qualm in lifting their veil in front of a woman election official to have their identity verified. Such a practice will build community cohesion in India.

And such a practice also needs to be established by the Election Commission because in the coming decades, India will witness more women than before wearing burqas, given the experience of past two decades during which burqas flourished in villages and towns across India. In the recent past when the Taliban assumed power in Afghanistan, the tent-like burqa which covered women from top to bottom flourished.

During my current tour of UP, I visited the town of Kairana (near Muzaffarnagar) where the Hindu population is negligible and the Muslim population is high. Kairana is basically a Muslim town. While travelling through its bazaars, I was shocked to see that the net-on-face burqa – the one which was used during the Taliban rule in Afghanistan – was a common practice. In this burqa, you cannot even see a Muslim woman's eyes.

The BJP might have raised the issue of burqas for the reasons of electoral politics, which seems to be the case. However, at the centre of this debate on burqa is the liberty of Muslim women who are not being supported by absolutely any secular, feminist and liberal Hindu and Muslim groups. As the population of Indian Muslims is projected to rise to 311 million by 2050, it is essential that the centre-right forces defend the liberty of Muslim women because the centre-left will not do so.