The efforts of the Bharatiya Janata Party (BJP) in Tripura paid off as it stormed to victory in the tiny state, ending the 25-year rule of the Communist Party of India (Marxist).

Of the 59 Assembly seats, the BJP and its ally Indigenous People's Front of Tripura (IPFT) bagged 43. The BJP won 35 seats and the IPFT won eight. The CPM could get only 16 seats and the Congress drew a blank. This marks the end of Manik Sarkar's two decades as Tripura chief minister. 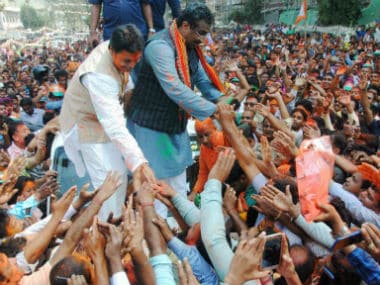 The BJP consolidated all the anti-Left votes, and with IPFT, succeeded in trouncing the Congress. The BJP-IPFT alliance reduced the CPM tally of 16 seats to one-third of what it was in 2013.

Prime Minister Narendra Modi hailed his party's resounding win in the state as an ideological victory. He scored some brownie points during his victory speech when he paused as the loudspeaker of a mosque near the BJP's new office in New Delhi called for azaan (prayers). Modi dedicated the victory to the party workers, some of whom lost their lives in violent clashes in Tripura last year.

“Today, peace and non-violence has prevailed over fear. We will provide Tripura the good government that the state deserves,” he tweeted in the evening.

Left out
For the ruling CPM, the results came as a shocker. The party had been hoping that moves such as revoking the much-derided Armed Forces (Special Powers) Act and the BJP’s alliance with the secessionist IPFT would tip the electorate in their favour.

The CPM members shied away from speaking with the media, but issued a statement conceding defeat and contending that the BJP, apart from other factors, utilised massive deployment of money and other resources to influence the elections.

Taking a dig at Sarkar, BJP’s North East in-charge Himanta Biswa Sarma suggested the outgoing chief minister leave the state altogether. “Manik Sarkar has just three options before him. He can go to West Bengal, where the CPM still has some presence. He can go to Kerala, where the party is in power and will rule for three more years. Or he can go to neighbouring Bangladesh,” Sarma told reporters.

Tripura BJP president Biplab Kumar Deb is likely to become chief minister. “I will abide by the party’s orders. It’s a team victory. We followed Amit Shah. He worked a lot in Tripura. We get confidence with the way the party president works. Whatever responsibility I will be given, I will take it,” he told media.

Tripura has been among the Left Front's longstanding bastions, which is why its drubbing at the hands of the BJP-IPFT alliance marks the beginning of a new chapter in the state's polity. In the state Assembly elections since 1983, the BJP had never polled more than 2 percent votes, except in 1998 when it polled 5.87 percent votes.

The Congress, which had won 10 seats and 36.53 percent votes in the last Assembly polls, got a mere 1.8 percent of votes and could not win a single seat.

Commenting on the results, political expert Sandeep Shastri said, “From the BJP's perspective, the results today will be important for two reasons: One, their footprint in the North East is clearly established and it legitimises their claim as a pan-India party. Secondly, the BJP was keen on doing well in the North East, given the uniqueness of the politics with identity and ethnic issues in the region, so that their larger national agenda can be injected to the politics of that region.”

“To a certain extent, what we see in the North East is also a polarisation, which was created on the basis of larger plans they [BJP] put forward.”

He, however, said the North East verdict will not have larger implications on the elections that are to follow this year, except that it could  possibly boost the morale of the BJP cadre, who will see this victory as a harbinger of things to come.

“For Tripura, maybe it's different, with a strong anti-incumbency factor after so many years working to the advantage of the BJP,” Shastri said.

Celebrations in Tripura started early for the BJP on Saturday, with the party showing clear majority. Party workers took to streets, dancing and raising slogans.

“We were not sure if the BJP could make it as I have seen elections won by the CPM… year after year. People in Tripura were suffering a lot. People have punished the CPM for its misdeeds. Now, the BJP has to work well to respect the historic mandate it has received,” said Debasish Majumder, a government employee and a resident of Agartala.

The authors are members of 101Reporters.com, a pan-India network of grassroots reporters. With inputs from SS Ali, a Tripura-based journalist