Narendra Modi in Gujarat updates: Congress leaders in tears due to demonetisation, PM says in Rajkot 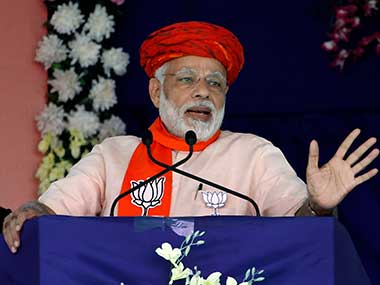 Prime Minister Narendra Modi is once again visiting his home state Gujarat on Sunday, three days after he addressed four campaign meetings for the BJP in the poll-bound state.

For his two-day sojourn, the BJP has organized seven public gatherings named as 'Vikas Rallies', to stress on the ruling BJP's development plank.

On Sunday, Modi will be addressing three public meetings, at Bharuch in the morning, and later at Surendranagar.

Modi will be visiting the capital of Saurashtra, Rajkot, before his visit to Ahmedabad where he will inaugurate a hospital at the Swaminarayan Gurukul Vishwavidya Pratisthanam (SGVP). The BJP wants to make this meeting a grand event and is planning a huge rally comprising more than one lakh people. The administration and police have geared up for the event.

On Monday, the prime minister will be holding public meetings at Dharampur in Valsad district and later at Bhavnagar. From there he will visit other places in Saurashtra: Junagadh and Jamnagar. He will also be visiting the state in three phases after 6 December where he will be addressing more than 24 meetings and rallies.

Modi was in Gujarat on Wednesday, to campaign in Saurashtra region and south Gujarat.

The BJP has been in power in the state since more than 22 years with the major share of that under the tenure of Modi as chief minister. But after having ruled for more than two decades, the saffron party is feeling a strong wave of opposition in the form of various agitations from different sections of the society.

A majority of these forces have joined hands with the opposition Congress party and the more than two-decades reign seems to be on the downslide. That's the reason why Narendra Modi, despite his very busy schedule, has made Gujarat virtually his home since the last couple of months and has been visiting the state every other day.

Lately, the saffron party has felt that the young Patidar leader Hardik Patel has been gathering more people in his rallies and that even their star campaigner Modi is not garnering the crowds he used to do in the state.

According to sources, the BJP is taking the Rajkot rally as a prestige issue and wants to make it a huge success. It can also be because the Saurashtra region has been opposing the BJP more than any other region of Gujarat and from where the Patidar agitations have had immense support and success.