Polling in the second and final phase of the Manipur election ended at 3 pm on 8 March. Voter turnout was estimated at 83 percent. In the first phase on 4 March, Manipur witnessed a record turnout of 84 percent.

The rise of BJP, as projected by exit polls, in this easternmost state is in line with the recent ascendancy it is enjoying in north-eastern states. As in Assam where Congress poll strategist Himanta Biswa Sarma walked over to BJP on the eve of the polls and helped script Congress downfall, in Manipur too six rebel Congress MLAs quit the party and were given tickets by the BJP. If the exit poll projections hold (C-Voter predictions have also been buttressed by India Today My Axis figures), then it would also seem that chief minister O Ibobi Singh's attempt to polarize the electorate between hills and plains didn't work.

C-Voter predictions for Manipur, based on a sample size of 1330, predicts a 36 per cent positive swing in vote share compared to 2012 figures. According to the agency, while BJP may witness 33.6 per cent swing in its favour, Congress votes will witness a 12.9 per cent erosion. BJP's positive swing is likely to come at the expense of other politics parties whose combined vote share will go down by 20.6 per cent, according to C-Voter.

Is Okram Ibobi Singh on his way out?


According to C-voter, BJP might clinch Manipur from Congress. The poll predicts that BJP might win 25-31 seats out of the total 60 seats. The poll predicts that Congress might only win 17-23 seats and current chief minister Okram Ibobi Singh could be on his way out from the post. Poll pundits believe that prime minister Narendra Modi's campaigning in the state has made in-roads for the party.

There was also heavy anti-incumbency in the state, whereas BJP was projecting closeness to the Nagas.

According to C-Voter exit poll, BJP may clinch Manipur and expand its presence in North-East. 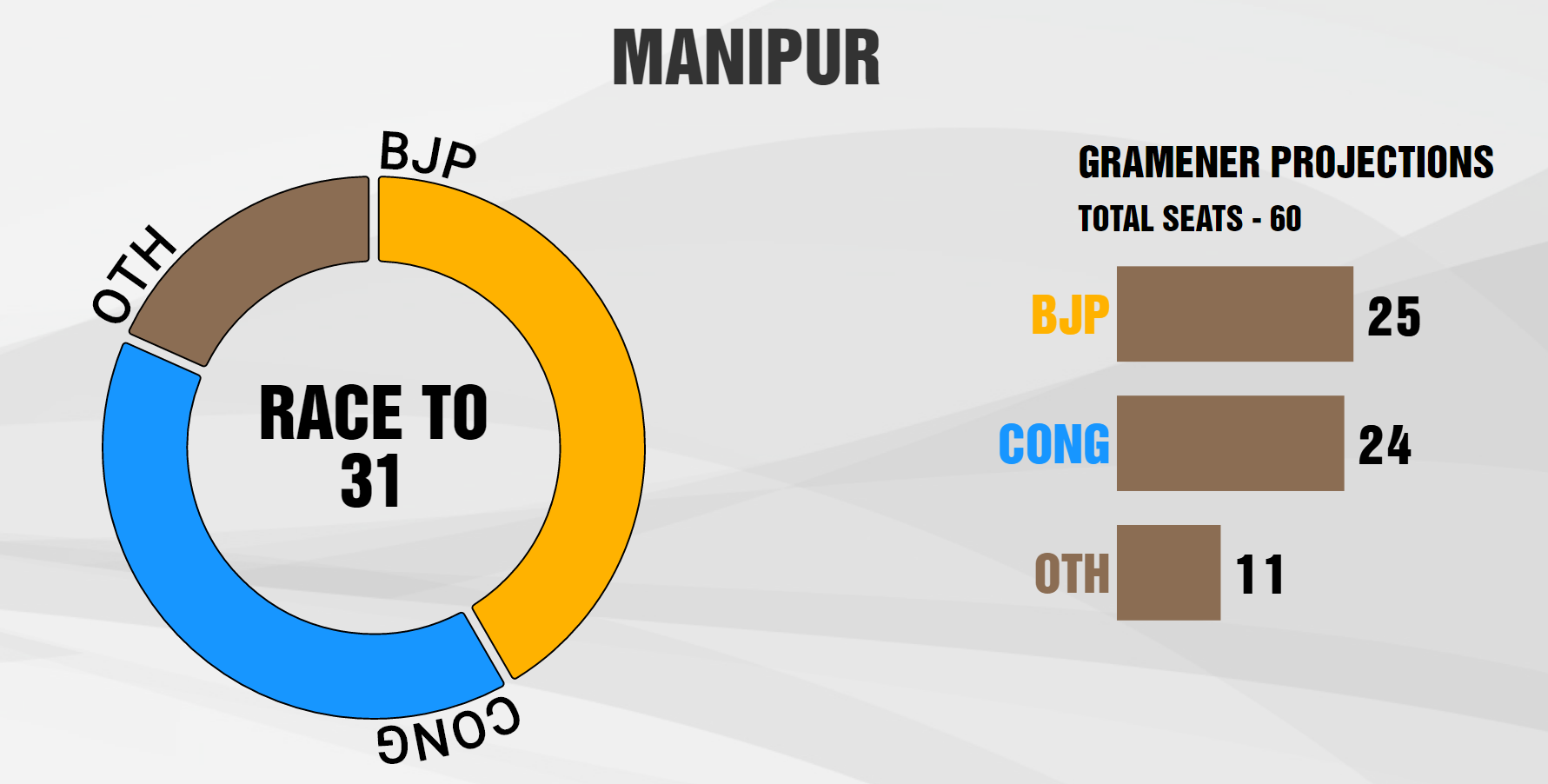 
India Today Axis My India poll projected its figures of Manipur and this agency seems to be at variance with C-Voter, predicting that Congress will between 30-36 seats in the 60-seat Assembly, edging past BJP's tally of 16-22 seats. If this is true, this could be the silver lining Congress was hoping for.

Even as exit polls come out, violence reigns in the state.


A handgranade went off at Singjamei under Singjamei PS in Imphal west this evening at about 4.30 pm. No casualty has been reported till date. The bomb exploded at the road divider in front of the Kumar Variety store at Singjamei Bazar along the Indo-Burma road, police said. The blast took place just a day after an IED exploded in Kasturi bridge in Imphal city on Wednesday evening injuring nine persons.

The rise of BJP, as projected by exit polls, in this easternmost state is in line with the recent ascendancy it is enjoying in north-eastern states. As in Assam where Congress poll strategist Himanta Biswa Sarma walked over to BJP on the eve of the polls and helped script Congress downfall, in Manipur too six rebel Congress MLAs quit the party and were given tickets by the BJP. If the exit poll projections hold (C-Voter predictions have also been buttressed by India Today My Axis figures), then it would also seem that chief minister O Ibobi Singh's attempt to polarize the electorate between hills and plains didn't work. 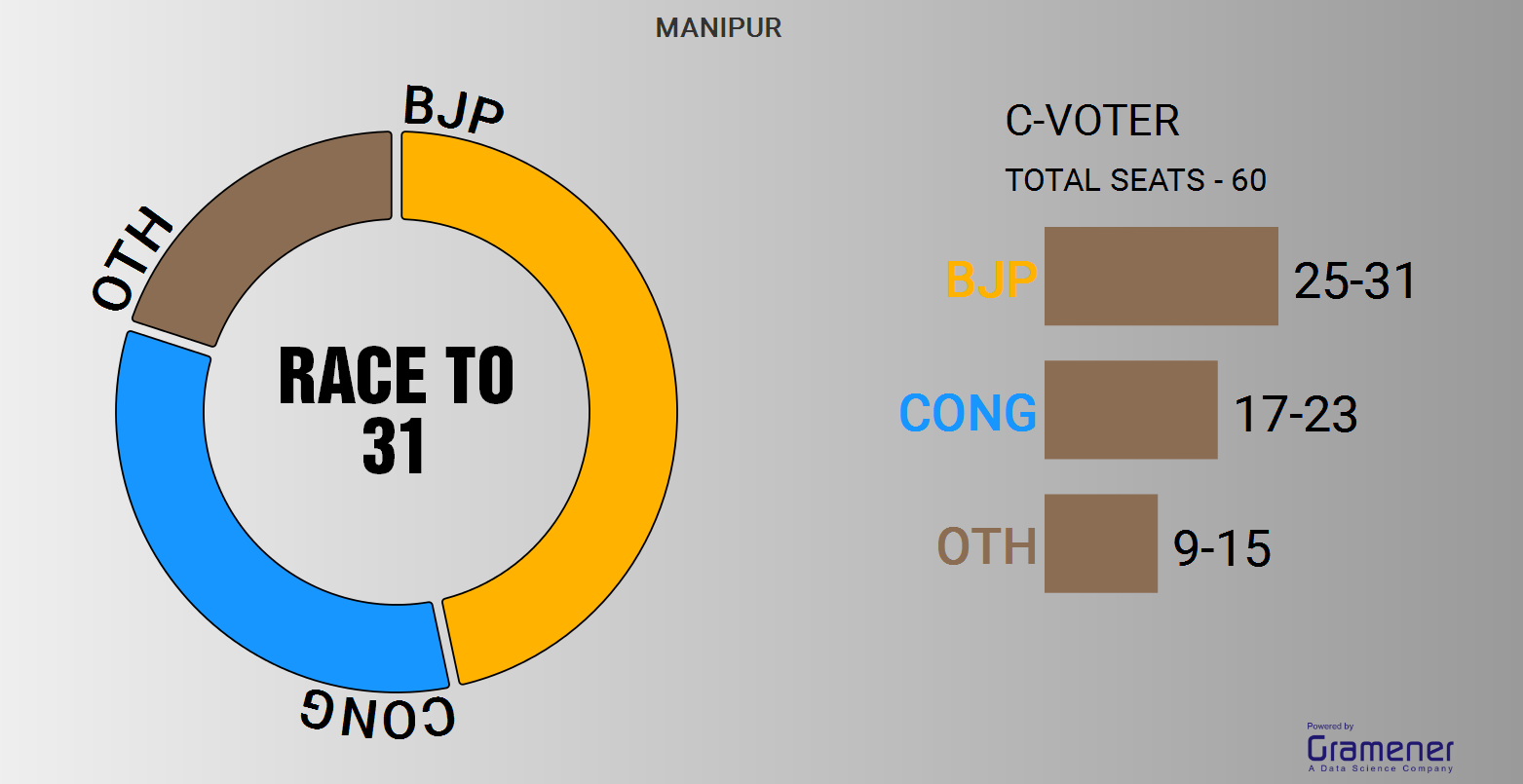 Polling in the second and final phase of the Manipur election ended at 3 pm on 8 March. Voter turnout was estimated at 86 percent.  In the first phase on 4 March, Manipur witnessed a record turnout of 85.5 percent. In Manipur, the only opinion poll has been commissioned by Huffington Post. The HuffPost-CVoter opinion poll estimates bad news for the Congress, predicting that the party will win fewer seats than the BJP.

The BJP is predicted to win 23 seats in the 60-member Assembly, the Congress is estimated to win 19 seats and the independent and smaller parties are estimated to net 19 seats clearly indicating a hung House.

Twenty seats have been reserved for SC/ST aspirants. The Manipur Assembly term ends on 18 March.

The loin loom gives liberty to women to weave as per her wish, she really is the master of her own work.