While the official line on the meeting between Prime Minister Narendra Modi and Tamil Nadu Chief Minister O Panneerselvam in New Delhi on the Jallikattu ban is that Modi did some right-distancing himself saying that the matter is sub-judice, the Tamil Nadu chief minister’s team came away from 7, Lok Kalyan Marg saying it was a good meeting. 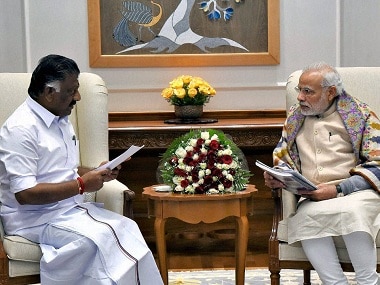 "The ban imposed on Jallikattu by the Supreme Court came up for discussion. While appreciating the cultural significance of Jallikattu, the Prime Minister observed that the matter is presently sub-judice. The Centre would be supportive of steps taken by the State Government," the Prime Minister's official handle @PMOIndia tweeted.

"Prime Minister Narendra Modi has assured CM Paneerselvam that all possible assistance would be provided to the State to address the drought situation. A central team would be deployed in Tamil Nadu," the Prime Minister’s office said.

Chief Secretary from January 2013-March 2014, Balakrishnan was a permanent fixture on Jayalalithaa’s most crucial assignments both local and out of state.

OPS heads back to Chennai even as schisms between him and Sasikala are becoming more palpable. Sasikala cronies in the AIADMK insist that the BJP is intent on helping OPS and sidelining Sasikala in TN politics.

For almost three days now, protesters have been swarming at locations across Tamil Nadu, demanding that the ban on Jallikattu be lifted as rival political parties are rushing in to score some cultural brownie points - a rare opportunity.

Within minutes of Modi’s statement after meeting Panneerselvam, one of Tamil Nadu’s smaller parties Pattali Makkal Katchi (PMK) announced it will go against the ban and conduct Jallikattu on 26 January. PMK founder S Ramadoss had earlier demanded an ordinance to conduct Jallikattu festival in Tamil Nadu during Pongal.

"Jallikattu was banned in May, 2014. If the ruling AIADMK and the BJP-led central government were serious about conducting the festival, they would have done it in one month. But both the governments showed no interest," Ramadoss said.

Although Panneerselvam is Tamil Nadu chief minister and Sasikala’s photographs — often seated at a too-shiny desk with pictures of Jayalalithaa-MGR and a pen and paper and said to be in the process of writing out thoughtful letters to Modi — appear at more regular intervals in Tamil language rags, the mood inside Tamil Nadu secretariat remains edgy.

Will she (Sasikala) occupy the corner office here is a question mark that hangs heavy in the corridors as staffers are still not done with their pet theories of the circumstances surrounding Jayalalithaa’s death and burial. Sasikala may live in JJ’s Poes Garden mansion but her shadows are certainly long.

For the BJP-led centre on the cusp of Uttar Pradesh elections, saying the Jallikattu matter is sub-judice and yet send the right, supportive vibes is just enough to keep the Tamil Nadu government warm and retain a semblance of a foothold in the unravelling politics of Tamil Nadu, post Jaya.

Sasikala’s husband M Natarajan has already waded in where he rarely went before, saying in Thanjavur on Monday that there is nothing wrong in his family being involved in politics.

He said his family members had played a significant role in protecting former Jayalalithaa after MGR's death.

"My wife Sasikala was protecting Jayalalithaa for 30 years. When she was denied permission to see MGR's body, we took her to the funeral. When she was pushed down from the funeral vehicle of MGR, our family members stood in support of her and all through her life. Brahmins were opposing Jayalalithaa to become chief minister. We only made her chief minister. So, there is nothing immoral if our family members are involved in politics," Natarajan said.

As Sasikala’s family tightens its grip on the AIADMK party, multiple forces are swirling to help deflect attention from Sasikala’s locus in party or political affairs of the state - first, it was Cyclone Vardah that shook Chennai within a week of Jaya’s death and now it’s Jallikattu.

No one’s happier than school kids in Tamil Nadu - since 5 December, schools have been closed for more days than anyone can remember in recent years.