Soon after getting sacked from the post of RSS chief in Goa for taking on the BJP over the issue of government grants for English medium schools in the state, Subhash Velingkar floated a new party — Goa Suraksha Manch (GSM). Just ahead of the Goa Assembly polls, Velingkar-led GSM announced a grand alliance with the Maharashtrawadi Gomantak Party (MGP) and Shiv Sena, who were the BJP's allies.

The former RSS chief has also launched scathing attack on the incumbent BJP government with Velingkar stating, "The BJP and Manohar Parrikar have betrayed Goa. They deserve to be packed off." 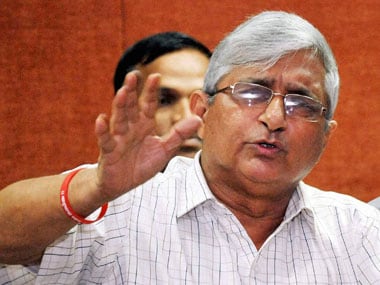 Trouble started brewing when Velingkar accused the BJP government of not following up on the promise made to stop government grants to English medium primary schools, most of which are run by a society operated by the Roman Catholic Church in Goa. After his removal, members of his outfit — Bharatiya Bhasha Suraksha Manch — had even waved black flags at BJP president Amit Shah,during one of his visits to Goa.

On the charge that he has meddled in politics, Velingkar had hit back saying, "RSS' policy of not indulging in politics seems to be inconsistent when it comes to the BJP." He even blamed Union ministers and BJP leaders Manohar Parrikar and Nitin Gadkari for his ouster.

"I was not shocked. I was anticipating it (the ouster). (Manohar) Parrikar and Nitin Gadkari are powerful at the Centre. They have (been) strongly lobbying there. They must have tried for it. They must have wrongly fed the RSS high command," Velingkar had told PTI.

Hitting out at Parrikar, Velingkar had said this is the first time a Sangh volunteer has done a volte-face after becoming a politician. "We are wondering what happened to Parrikar that forced him to take this illogical stand (of giving grants to English medium schools). This was their own (BJP's) demand, how can they go against it now," Velingkar had said.

According to the IANS, Velingkar has continued with his attack on the BJP and its leaders for their neglect of regional languages, especially in primary schools. His role and that of the GSM are proving to be a thorn in the BJP's flesh. Neither the Congress, nor the AAP, nor the MGP has been able to match the intensity of Velingkar's accusations and singularly anti-BJP campaign, which has the RSS and the BJP cadre in a bind.

"If BJP wins even five seats we can say the party has ruled Goa well in the last five years," Velingkar told PTI.

While the MGP is in coalition with the GSM and the Shiv Sena, it has kept its options open for a post-poll alliance with the BJP. Evading questions on the fate of the alliance, MGP president Deepak Dhavalikar told IANS, "I cannot tell you that now... Sometimes in politics you have to adopt Chanakyaniti." He further added that they will be fielding Sudin Dhavalikar, former PWD minister in the BJP-led coalition government, as the chief ministerial candidate.

Sudin Dhavalikar, while announcing the alliance, said the alliance will be contesting 35 of the 40 seats in the Goa Assembly, Shiv Sena will contest on four seats – Saligao, Thivim, Cuncolim and Mormugao, and GSM on six seats – Siolim, Panaji, Mayem, Sankhali, Curchorem and Velim constituencies.

While it remains to be seen whether the grand alliance will be able to make a strong impact in the Assembly election, Velingkar has made his agenda very clear.

"Once we form the government, the first and foremost decision would be taken to withdraw government grants given to schools having English as medium of instruction," Velingkar recently told reporters.

He said education in English is against the universal principles and unnatural as worldwide it is established that teaching should be only in mother tongue.