At 7 am in the morning, the main junction in Paippad village on the borders of Pathanamthitta and Kottayam districts turns into a ‘mini India’ with people conversing in Hindi, Bengali, Assamese, Odiya, Manipuri, Tamil and other languages.

These are migrant labourers who are waiting for contractors to take them to construction sites or to be hired by individuals who need their service. The junction becomes deserted within an hour. It gets crowded again in the evening with the migrant labourers returning to pick up provisions, recharge mobiles and do other chores.

Until two decades ago, Paippad was a sleepy village with people engaged in agriculture and allied activities. After the fertile farmlands, where cash crops and food crops were cultivated remained uncultivated after agricultural workers started migrating to the Gulf countries.

When the neo-rich out-migrants came home on leave and tried to build new houses, they could not find enough workers to do the job. As most towns and cities in the state, there was a labour shortage, builders went to West Bengal and other north eastern states looking for construction workers.

The workers, who were getting only Rs 50 to Rs 70 a day in these states, came in troves when they were offered Rs 300 to Rs 400 a day in Kerala. Attracted by the higher wage, people started coming to Kerala. Workers from Bangladesh and Nepal also came.

There is no clear data on the total number of migrants and sources of their origin available with the Labour Department or other official agencies. The Gulati Institute of Finance and Taxation (GIFT), Thiruvananthapuram has estimated their number to be 25 lakhs on the basis of a study they conducted in 2013. The number might have swelled to 30 lakhs by now. The GIFT projects this to go up to 40 lakhs by the end of the decade.

The largest concentration of migrant workers (60 percent) is in the construction sector, which has been witnessing a boom over the past one decade and more. The rest works in farms, hotels and restaurants, shops and manufacturing units. Besides Paippad, other centres where largest concentration of migrant labourers found are Perumbavoor in Ernakulam district, and Cheruvannur in Kozhikode. 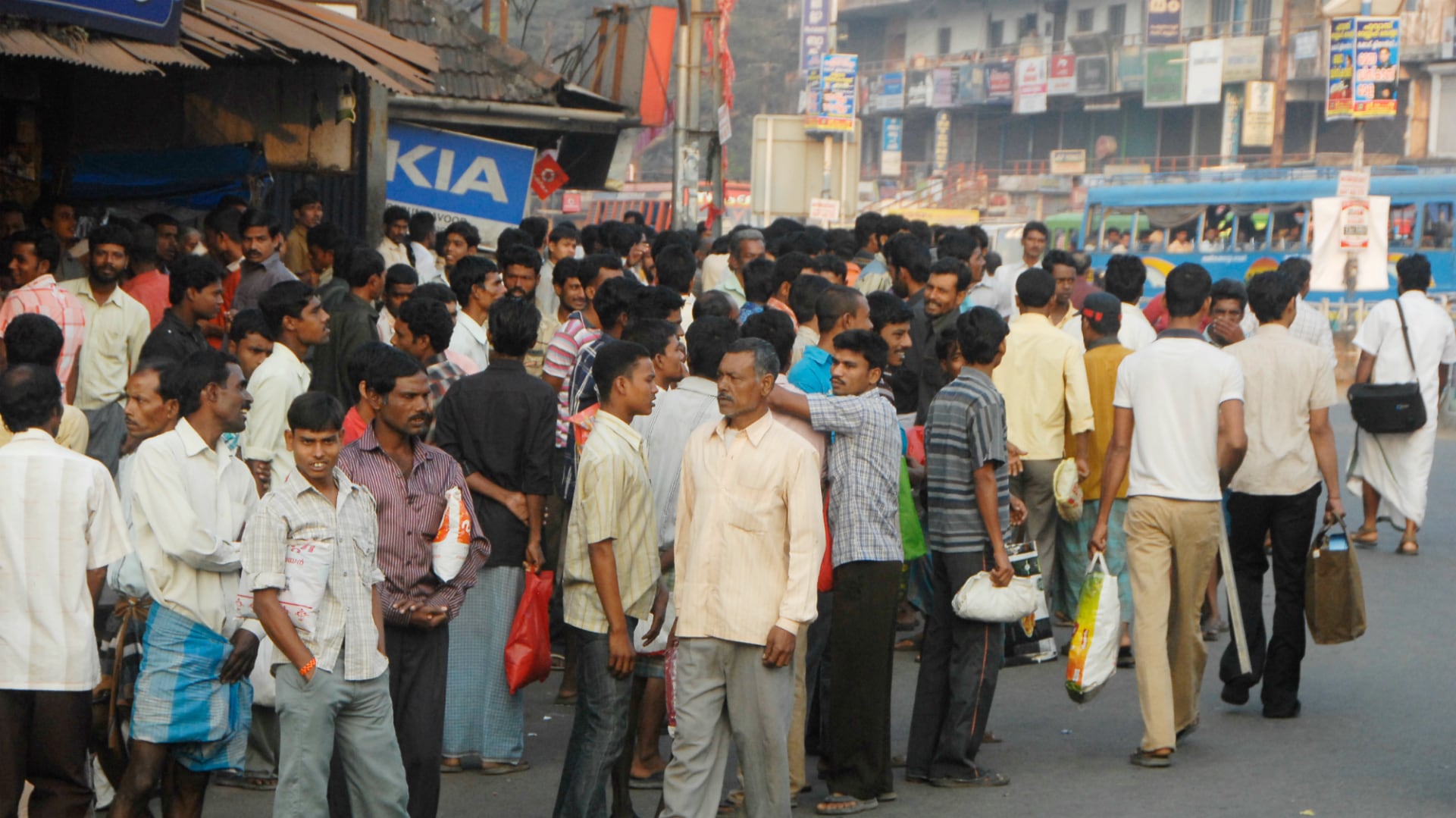 Migrant labourers constitute 50 percent of the population in Paippad. The total population of the village, according to 2011 census, was 21,338. The village attracted the migrant labourers as the land left uncultivated by the out-migrants were taken over by the real estate mafia to build houses for a new set of internal migrants that the state witnessed from water-locked Kuttanad.

Incidentally the people, who are migrating from Kuttanad to Paippad and nearby areas, are mostly Gulf migrants, who have found the water-locked hamlets unsuitable to their new lifestyle. This has turned Paippad also as a ‘mini Gulf’. While migrants in Gulf live comfortably in labour camps, the migrants in Paippad and elsewhere in Kerala are crammed into sheds or rooms without toilets and other basic facilities.

Mittu Sarkar, who is from Malda, West Bengal, told Firspost that he was living in a small room with 10 others. They cook food in a corner of the room. As there is only one toilet for 15 people to share, they get up at 4 am and queue up. They are forced to take bath in the open and pile up the waste in the backyard. This is the condition in which most migrants live in Paippad.

Labour activists said the situation was the same everywhere. “The workers live in cramped quarters. The hygienic condition in most of these places is pathetic. Workers fall sick quite often, mostly with water-borne and mosquito-borne diseases. They have little access to medical facilities,” says Father Shin Kallungal, director of Jeevika, a voluntary organisation working among migrants.

The issue has evoked disgust and resentment among the local population. In 2012, this resentment took a violent turn at Paippad when disposal of waste on a public road by the workers triggered a clash between the workers and the local community.

Fr Shin said lack of personal hygiene was also causing resentment resulting in discrimination of the migrant workers. The locals refused to sit next to these workers in buses and trains. Their resentment becomes apparent whenever there is a crime reported in the state. The finger of suspicion is always first pointed at the migrant worker when a theft or murder takes place. The gruesome murder of a Dalit law student at Perumbavoor allegedly by a worker from Assam last year has deepened the mistrust.

A study conducted by the Centre for Migration and Inclusive Development (CMID), Perumbavoor found that life was very hard for migrant workers in Kerala. Apart from the poor living conditions, they also suffer various kinds of exploitation. The study conducted by Benoy Peter revealed that the migrant workers are made to pay more for travel, stay and purchases compared to the natives.

On the contrary, they consider the migrants with certain degree of animosity since people have been showing preference for them. The migrants are preferred because one migrant mostly does the job of at least two local workers, who stick to official work timetable.

Social activists say that even religious groups were ignoring the migrant workers. Though the Church has a strong network of missionaries in northern and eastern state, there is no mechanism to meet the needs of the migrant people in the state. However, a recent study by the Kerala Institute of Labour and Employment (KLIM) indicated that Keralites have a slightly more positive attitude towards migrant workers.

Social activists say that Kerala cannot go ahead without migrant workers. The state economy will crumble if these migrants leave the state as almost every sector is dependent on them, says CR Neelakandan, a human rights activist. Activists, therefore, have been calling for concrete steps to integrate the migrants into the society.

“An enlightened society has to take steps to assimilate the migrant population into their adopted community, instilling in them a feeling of oneness, so that they can work together towards regional aspiration and development. Isolating some and treating them as second class citizens can only lead to backlash by way of crimes against civil society and result in deleterious consequences of widespread public harm and injury, including spread of epidemics,” said high court judge K Vinod Chandran while considering a petition over the unhygienic labour camps of migrant workers.

The KLIM study showed that the migrants were generally happy with the local people. However, majority of them do not like to live long in the state. They prefer to work for five to 10 years and go back to their home states. The study found that out of the total population of migrant workers who arrived before 2008, only a maximum of two percent remained in the state. Of those who continue, 22.7 percent arrived in 2012 and 31.7 percent arrived in 2013.

If the labour leaders do this, Kerala will certainly be the Gulf for these migrant workers, who have made it an immigration state after a span of six decades. This will have significant impact on the demographic structure marked by the steady decline in working age population and rise in the elderly.