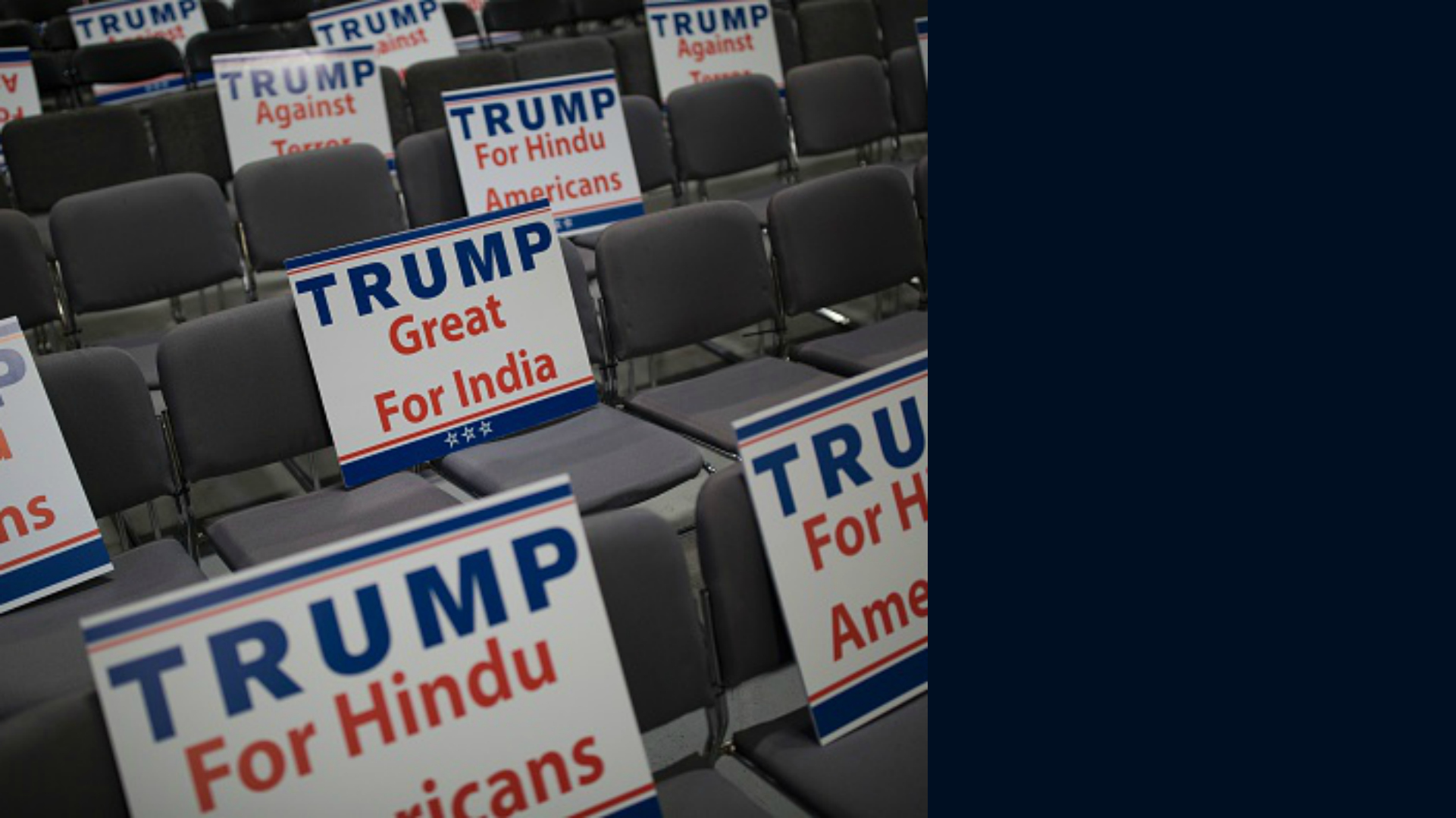 In this, the third part, read about the Republican Hindu Coalition and the schism between Indian-Americans who find community amongst other South Asians, across class and ethnic boundaries, and those who choose to insulate themselves.

In October 2016, a political ad made the rounds on the Internet. The ad featured then-candidate Donald Trump looking at the camera, parroting the infamous Modi catchphrase in stunted Hindi: “Ab Ki Baar, Trump Sarkar.”

In October, Trump was the guest of honor at a Bollywood-themed event. He spent about three minutes helping light a diya while the song “Proud to be an American” blared in the background. And then he got into it. He spent fifteen minutes decrying “radical Islamic terror” while apparently conflating the 2001 attack on Indian Parliament and the 2008 Mumbai attacks, touting deregulation while in another breath bragging about his “massive developments in India,” and claiming that China stole $360 billion worth of US intellectual property while also claiming that US-China relations would be “great” under a Trump administration.

A ring of counter-protest took place around the theater. And yet another ring of mostly white Trump supporters surrounded the South Asian anti-Trump demonstrators, hurling racial slurs at them. The organisation behind the ad and this event is the Republican Hindu Coalition, modeled after the Republican Jewish Coalition. The coalition intends to build political capital for the “Hindu-American community.” The mastermind of this coalition is Shalabh Kumar, a self-identified Hindu-American industrialist. The coalition has attempted to strike a narrow path between anti-Muslim nationalism, libertarian limited government, and US protectionism. Clearly, Trump hit a vein by pledging support for skilled immigrants (even as he had vowed to limit the H1-B visa program during the primaries) and by pledging open season on Muslim-Americans.

To outsiders, and certainly to many white Trump supporters, this might seem strange. I’d argue that there’s a schism between Indian-Americans who find community amongst other South Asians, across class and ethnic boundaries, and those who choose to insulate themselves, cherry-picking ideologies that further ensconce them in their small circles. In addition to a fixed debt ceiling and limited government intervention, the RHC platform includes social mandates like opposition to abortion. At this point, the so-called Hindu grassroots is completely lost to GOP pandering.

Now let’s speak a little bit about Shalabh Kumar’s motives for assembling this “grassroots” coalition. Kumar was a big donor to the Trump campaign. This coalition has clearly been used to curry favor with this administration. It was intended to be a bridge between Republican Hindu-Americans and the Republican Party Leadership. Kumar is “a member of transition finance & innauguration (sic) committees,” which recommends people to serve in Trump administration. 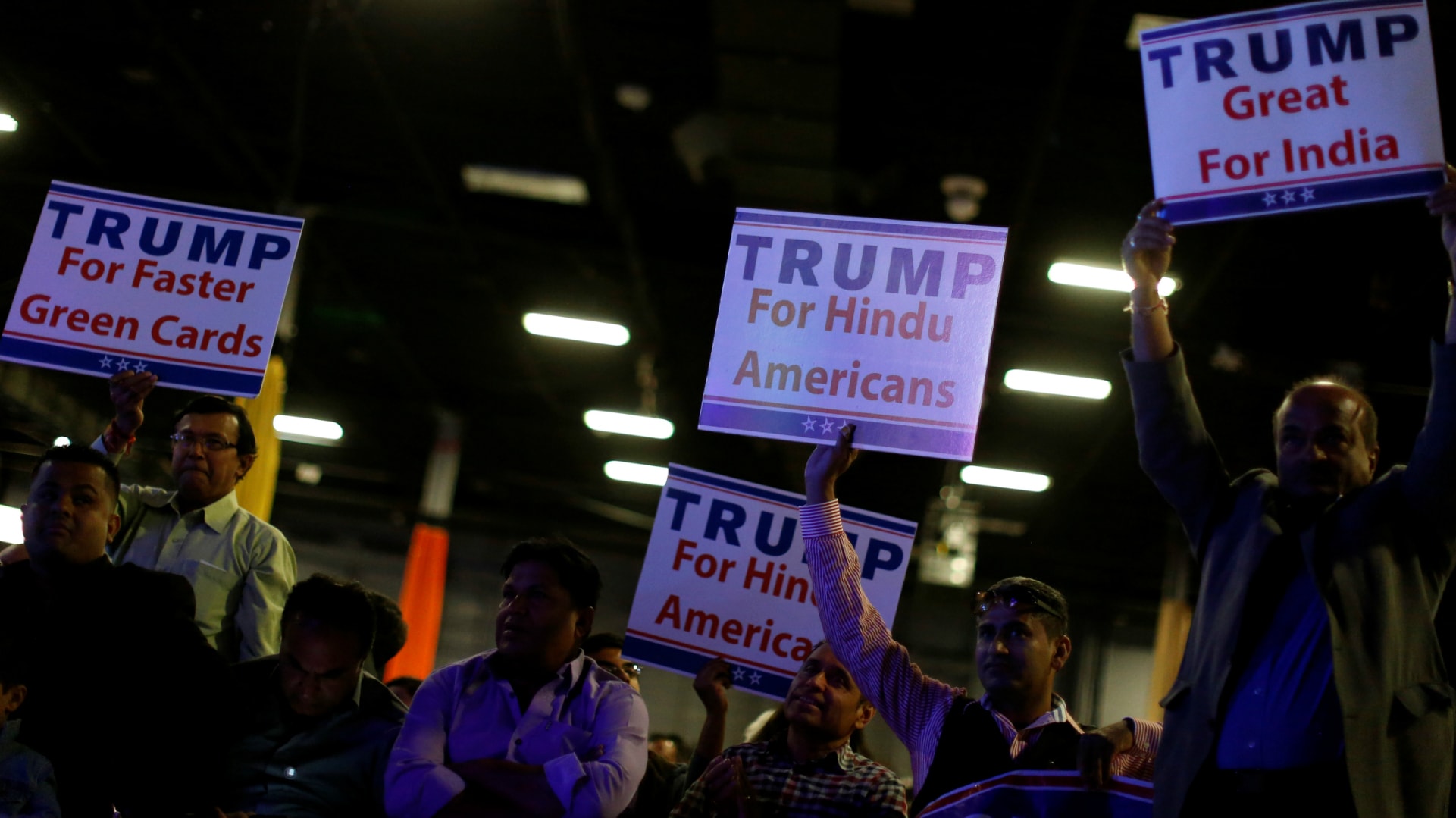 Any “movement” that is created or co-opted for an individual’s political gain or self-interest is not a grassroots movement. Left-leaning Indian-American politicians should not be immune to the same criticism. In identifying as “people of color,” Indian-American politicians often co-opt grassroots movements to bolster their political careers. Feckless Democrats made the mistake of assuming that Indian-Americans would vote Democrat simply because they identified as people of colour as well.

I see the RHC as a misguided attempt to map a one-to-one comparison between certain Hindu-Americans’ relative privilege in India to their positions here. If people are poor and coming from Mexico, keep them out, the argument goes. But it goes unacknowledged that waiting in line with a graduate degree means that you are infinitely more likely to be allowed to enter the country, even though you are less likely to starve in the country you came from. Railing against the Muslim-American community serves a similar purpose. But this isn’t India. The average American immigration officer cannot distinguish between a Hindu surname and a Muslim one and the average white nationalist won’t bother to ask what you are before he shoots. Here is the implication: As long as you, at the very least, keep your mouth shut, or at the most, support the racism and xenophobia waged against other groups, the state will protect you. But America has always operated on the premise of “last in, first out.” It is naïve to think that any amount of favour curried by a minority population will save them in the end. Loyalty tests didn’t save Japanese-Americans from being interned during World War II.

Communities in the US cannot and should not be exclusive. Communities are based in real life problems that affect our every day lives. Grassroots movements are borne of a collective will to fight for the survival of these messy and overlapping communities. We have the latitude and the need to set our own agendas. Communities identify the problems we experience in our daily lives and work to confront them together. We do not need a “coalition” to speak for us. As Indian-Americans, we are uniquely positioned to recognise the oppression that people who look like us face here and abroad. Who should we align ourselves with in the end?

Are a few feeble words in Hindi enough to convince us? Is an H1-B visa worth it? Is it worth turning a blind eye to the fear and humiliation suffered by millions of innocent people in this country and around the world? Is it worth diminishing and white washing those very real consequences for our own peace of mind? Is it worth supporting mothers being separated from children at the border? Is it worth being gunned down at your local bar? Even privileged minorities are not immune to having the rug pulled out from under their feet. Instead of cowering in the shadow of power, we must stand fight for ourselves and for one another.