Alice* was bored stiff sitting next to her sister who was reading Cosmopolitan under a tree one balmy afternoon. She sneaked a glance over her sister's shoulder but found the magazine to be awfully droll and stupid. What was the point of magazines that didn't even have decent articles? Pondering over the virtues of lugging donuts along for a sexual encounter, Alice fell asleep.

She was woken out of her siesta by the sound of a rabbit in a waistcoat scurrying past her. He kept looking at his pocket watch muttering "Oh god, her period is late, her period is so very late!" Now Alice had met a rabbit in a waistcoat before — dude named Jasper who liked two pumps of milk in his chai tea, one more than the pump he managed in bed — but this was too compelling.

She decided to trail the rabbit, following him into a hole in a nearby tree. Losing her balance as she entered, Alice found herself falling endlessly into an abyss. When she finally crash-landed, she found herself in a huge hall with a three-legged glass table and a bottle on it that said "Drink Me". Through the keyhole of the tiny door in the room, she could see a beautiful garden outside. She knew had to get out there. There was however an issue. Nailed on the door, a sign in angry red lettering: No entry if preggers or on period, thx.

Alice found herself in a unique position. As a young lady with polycystic ovary syndrome (PCOS), she wasn't a part of that magical population that could rely on the regularity of their periods to make educated conclusions about their ovulation. This is why she didn’t believe in that false god Pulling-Out. Right now, her period was late. And even though there was no logical way she could be pregnant, her mind rushed through at least three ways she could have been impregnated. Because of PCOS Alice also had insulin resistance, and therefore a beer belly (irrespective of beer), especially when her period was overdue. Sometimes, in passive aggressive self-hate, she'd stand in front of the mirror and put her hands on her bloated belly, pretending she was pregnant for a joke. It had a 50 percent hit rate. Sometimes she laughed uncaringly, sometimes it broke her down. Unsure of whether she was pregnant or not, she hesitated. 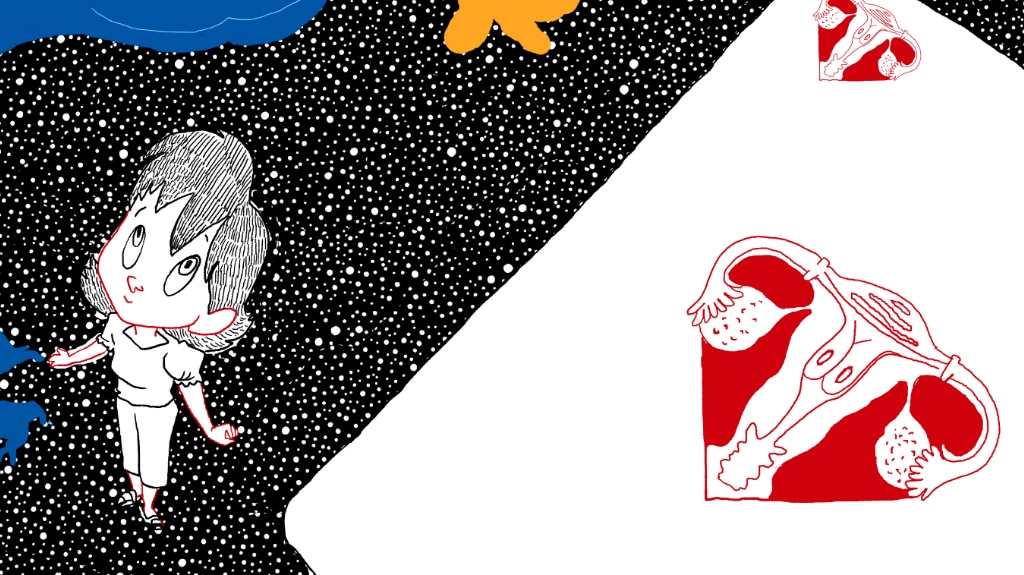 She turned her eyes to the bottle on the table. Deciding to go with the flow (ha ha), she sipped gingerly from the bottle. At first she felt nothing, but then the signs were unmistakable. Her lower back ached dully, her pelvis was sore, and in the tiny spot next to her nostril, she felt the beginnings of a painful pimple. A few seconds and a very telltale sign between her legs later, "my period!" she realised in part glee-part terror.

But happy as she was to realise that she wasn't pregnant, Alice was now afraid of stepping into that garden while on her period. For reasons completely unrelated to period emotions, she started crying at her nightmarish situation. Sobbing, she noticed a cake sitting on the table that said "Eat me". “K,” she decided, and took a big bite. Within seconds she felt all aches disappear and could sneeze and cough without feeling like a leaky tap. This was great. Except it didn't stop there. She could swear she felt one of her ovaries shrivel and die. Feeling bloated and nauseous, she realised, much like in her real life, her period had been replaced by a perennial PMS. Could a young lady not get a break!

Alice spotted the rabbit walk past her again, exclaiming "Her period is late, so very late!" She followed him into the garden. Not soon after she started exploring the garden on her own, she saw a tiny regiment of soldiers made of playing cards and between them a really pissy looking Queen adorned in hearts. The Queen stopped in her tracks when she saw a gardener painting a white rose red and yelled "Off with his head!"

As she walked onwards in tune to refrains of “off with their heads,” Alice spotted a Chesire cat on a tree branch, with a shit-eating grin that seemed not unlike her sister’s upon the consumption of an extraordinarily dank…meme.

"Why is she in such a horrid mood?" Alice asked, nodding in the general direction of the Queen.

"That’s not a mood,” the cat said in his slow drawl. "The Queen hasn't had her period in a while and the King thinks it’s something to do with the Knave of Hearts. Rabbit’s in charge of inducing her period and put these rumours to rest. Dude’s on trial as we speak. And Mad Hatter’s summoned as witness for the prosecution. So it's generally been a high-stress environment,” he explained.

"You know it’s a shitshow if it’s come down to the Hatter. He was most rude to me when I met him at the tea-party. Asked a riddle and when I tried answering, said "Ladies with beards shouldn't talk.” Told him assholes without beards shouldn't either. Tried explaining that women weren’t born hairless – but he was having none of it. Said if that was true then how could I explain Brooke Shields in Blue Lagoon” Alice fumed. 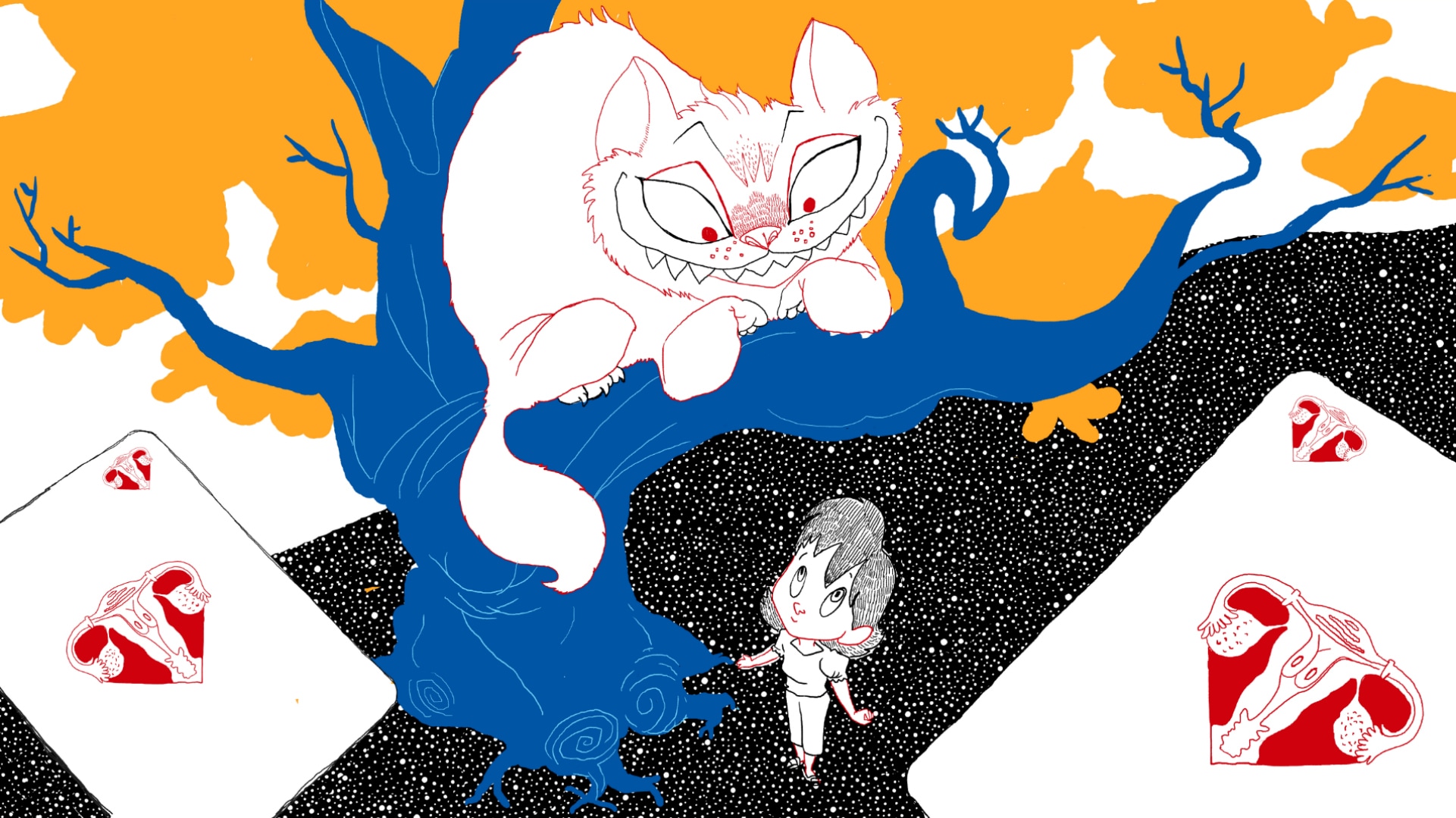 "Don't mind the Hatter," the cat said gently, "he has a skewed worldview on how the only two genders he believes exist are supposed to look. If you can’t have kids or look ‘feminine’, his brain computes it as an error. I don’t think he’s a fan of the Queen either, but grudgingly accepts the monarchy.”

"Speaking of! Has it not crossed any of your minds that she might be going through menopause?" Alice asked. "She’s mad as fuck, above 40 and a throbbing asshole to everyone around her. It's not rocket science," she said.

As Alice walked towards her house, she felt a familiar stabby ache in her lower abdomen.

"That's an awfully reductive and insulting statement to make, actually," the cat replied.

"So…she's not a jerk?" Alice said to him, confused.

"No. She's clearly a despot," he replied, “but not because she’s pregnant or menopausal. She’s a despot because that’s how power works.”

Smarting from that layered and incisive commentary on sweeping gendered generalisations based on the supernatural powers of a uterus, Alice felt embarrassed. How could she fall for the same unexamined stereotypes she was especially subjected to from people in her life because of PCOS? The world was collapsing in on her.

She quickly considered stealing that "Drink Me" bottle for future use IRL but the soldiers were rushing in on her. Alice braced herself for sweet, sweet release.

"Wake up! Alice, you need to get up," she heard her sister nudge her awake. Still reeling, Alice mumbled, "Oh I've had the strangest dream". As she relayed the deets of her adventure, her sister wistfully sighed, “That shit was lit, fam”.

As Alice walked towards her house, she felt a familiar stabby ache in her lower abdomen.

"Oh great, my period is here"

*To serve my own purpose, please let's assume Alice is a young lady, not a pre-pubescent child as in the original.

The author is a published writer, poet and editor finishing her second Masters from the University of British Columbia.

Read part one of the PCOS series.