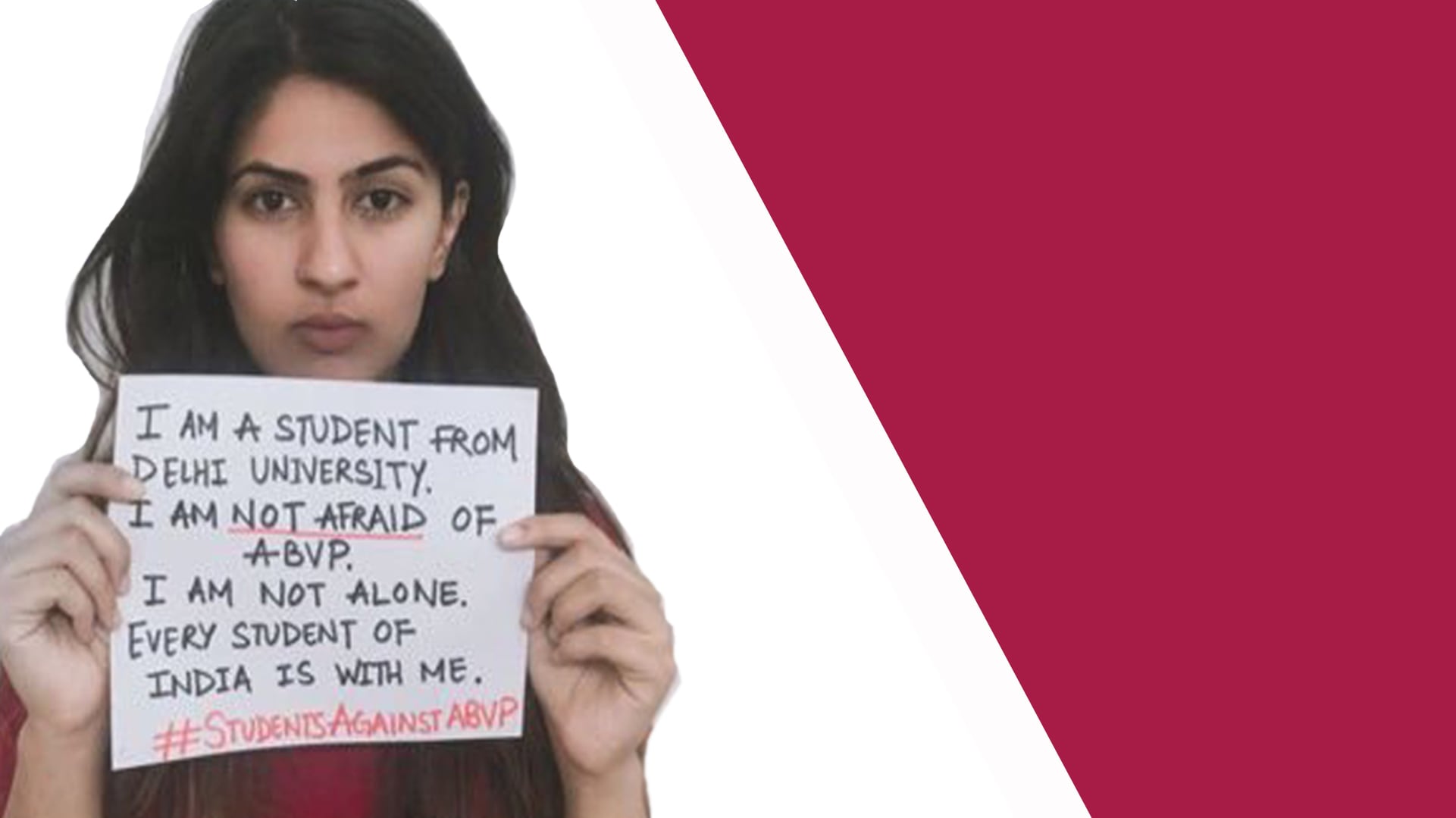 Gurmehar Kaur: Can we not speak our mind?

An ordinary Friday turned out to be not so ordinary, when 20-year-old Gurmehar Kaur agreed to meet me. Peeking from behind her phone at a nondescript beauty parlour in suburban Mumbai, Kaur was perhaps the most wonted 20-something I had ever met. It was hard to imagine that just recently, Kaur was branded an ‘anti-national’ by a large section of the country.

“Hi, I am the journalist who has been hounding you for the past two weeks,” I said. Kaur giggled and extended her hand and said, “You weren’t the first, not the last and definitely not the worst.”

While I was looking for a place to sit, Kaur told me how she needed to do something about her look — to make herself less discernible in public. “Is that why you are changing your hair?” I asked, and realised that Kaur did not have the same worries as any other 20-year-old.

“So, what is it that you want to know, considering they (the media) probably have more information about me, than I do of myself,” she asked.

On a weekend at the end of February, social media was in a frenzy over a photo of a Delhi University student who had shared a message about the student wing of the Rashtriya Swayamsevak Sangh — the Akhil Bharatiya Vidya Parishad (ABVP). The story in a nutshell: Students of Ramjas college had planned a seminar called the Voices of Dissent and the key speaker for that event was JNU student Umar Khalid. There was a difference of opinion between the two leading student union groups — ABVP and AISA (All India Students Association - the Communist party’s student wing). The ABVP objected to Khalid’s talk on freedom of speech and expression. The reason they cited was Khalid’s involvement in last year’s incidents which led to clashes over Khalid, along with Kanhaiyya Kumar and Anirban Bhattacharya being charged with sedition. 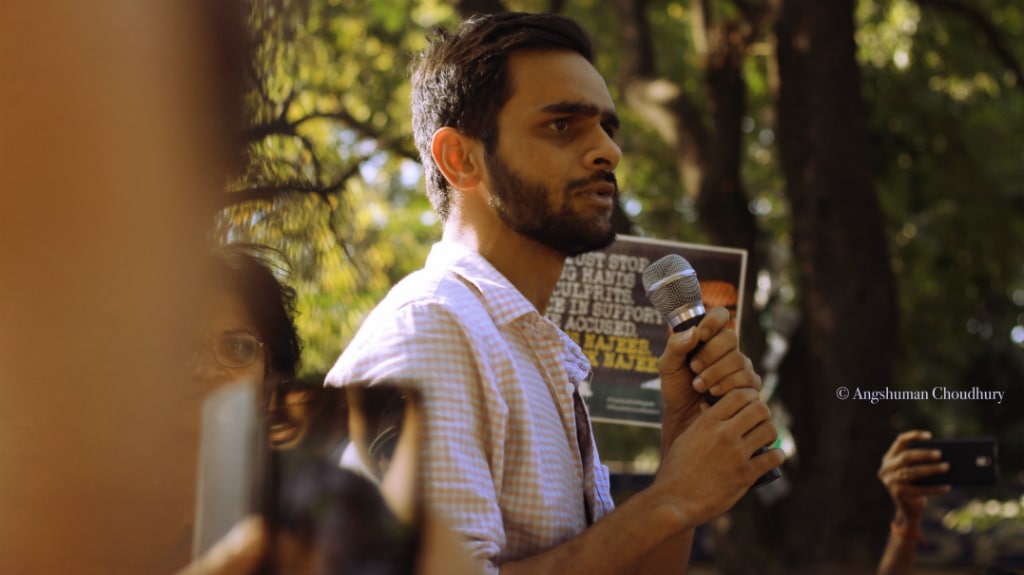 The night that Ramjas students — who agreed with AISA activists that Khalid should be allowed to speak at the seminar — planned a ‘peaceful’ protest against ABVP objecting to the event, there was reportage that there were “violent clashes” on the campus. Kaur’s close friends were protesting along with the Ramjas students that night.

“ABVP goons disguised as students, had thrown stones, iron rods at students and faculty members, the dean was thrashed brutally. Mind you, there were kids who were as young as 17 who were lathicharged. My girlfriends were taken by the police after 6 pm without any woman constable present, and were randomly dropped off near Hauz Khas metro station. I was getting all this information at 9 pm,” said Kaur.

Kaur, in her own words, does not care much for politics. “I don’t care about Left or Right. I was, however, infuriated that students and teachers, (the dean himself) were beaten up by students who did not agree with what was happening. What is this world where students beat up their teachers, I wondered. The decision to upload the image was spontaneous,” she said.

Kaur took a photo of herself holding a placard, which said: “I am a student from Delhi University. I am NOT AFRAID of ABVP. I am not alone.”

Suddenly, Kaur became the focal point of discussion, debate and discourse on various media platforms including social media. The only issue at hand, the violence at Ramjas was completely forgotten. Headlines became about the ‘Kargil martyr’s daughter’.

“Overnight, I was an anti-national. And I did not know why. I did not know why I was being called Kargil martyr’s daughter — of course he is my father and I am immensely proud of that identity, but that was not the matter of concern at that point of time. I am a student of Delhi University, and restraining my right to speech by violence curbs my existence as a human being. That is what I was fighting for. It was not about politics, it was about my friends and peers who were thrashed for speaking their mind. How does my father, who died for a war that he did not create, come in to the picture?”

All this while, a different war was being waged on social media, a video of Kaur, which was shot more than a year ago, was being circulated. Soon enough, it started trending. In that four-minute video in which she recounted the pain she felt over the death of her father – an Indian Army captain who was killed on duty during the 1998 Kargil war between India and Pakistan. She was seen carrying a placard about the need for peace, stating at one point, “Pakistan did not kill my dad, war killed him.”

With that, Kaur found herself in the middle of an unforgiving political storm around nationalism, anti-nationalism, rights of freedom of speech and expression. It turned into a national debate which fed newspapers, television channels and online publications for weeks and had politicians, actors and sportspersons weighing in.

Someone accused Kaur of “leveraging her father’s death,” others called for the 20-year-old student to be raped and murdered. Some said that her father would be saddened by her if he had been alive to see what she had done.

“I did not care much about the Twitter trolls and I knew there would be a backlash especially if you say anything about ABVP. It is a fact that I never experienced it first hand, I merely had 40 followers till s**t hit the roof. But I honestly did not care much,” she said. 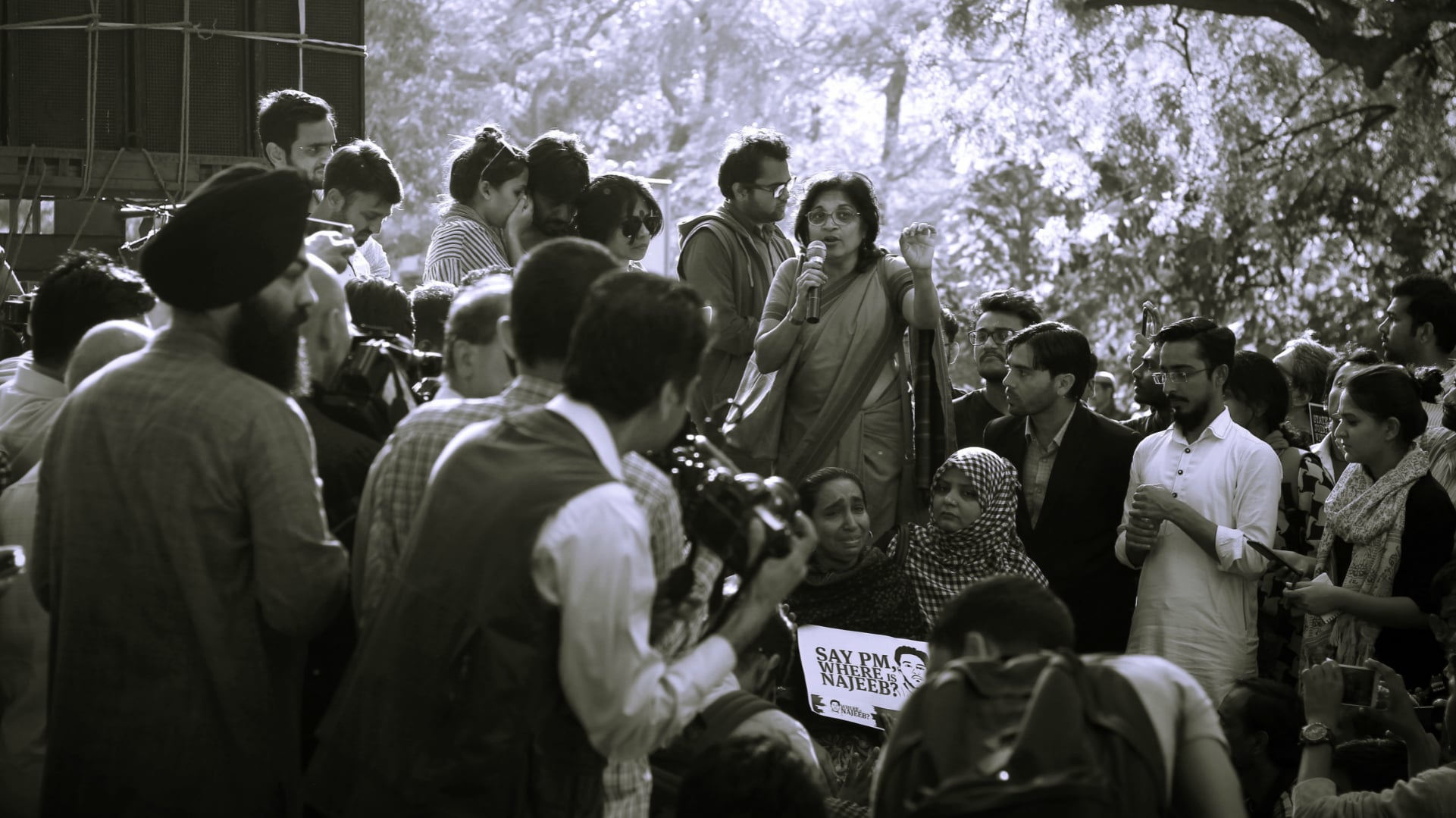 Nationalists were furious with her, and a large part of the abuse was directed at last year’s video. Kaur recalled the time when praises were being heaped on her by the media and ‘experts’ about how powerful, strong, honest and compelling her message was; the same set had turned foe. “News is about convenience today, it is made to suit someone. Last year, the same video did not lead to questions of nationalism or my political affiliations. But the same video a year later made me into this villain and was used to attack me,” she said.

Trolls and media aside, what catapulted Kaur into infamy was the Virendra Sehwag’s tweet (I didn’t score two triple centuries, my bat did) and the subsequent response to that tweet from Randeep Hooda. ​Both Hooda and Sehwag, who enjoy a certain social media influence and are eminent personalities in the country, broke Kaur.

“I was probably 18 or 19 and I was at the Mohali stadium. I was part of that massive crowd who was screaming and cheering for the Indian team when Sehwag was at crease. It’s probably silly but the fact that we are both Punjabis made me feel a sense of belonging at that point of time with Sehwag. And then he tweets something which has a clear intent of hurting me in the worst way possible because it was about my father. The conversation on Twitter continued with Randeep Hooda, again someone I have admired a lot for his work and the way he carries himself, who said ‘it was a good joke.’ That broke me.” Minister of State for Home Affairs Kiren Rijiju also commented on the video saying her mind was being polluted by the Left. “Here is a question for Mr Rijiju, my mind has been polluted for a year, where have you been?” Kaur asked. All of three when her father passed, Kaur has foggy memories of her father. “My mom used to make me recall stories of my father later. My younger sister was a three-and-a-half-month old infant when my dad died. My parents love story is one of the best I have heard. These were the things they attacked...I still did not give it much thought, you know. I let it pass. I told myself I will sleep on it. But the next two days were the worst,” Kaur recalled.

By her own admission, Kaur said that her phone had not stop ringing “even for a second”. She was getting incessant calls from mediapersons who had been trying to get an “exclusive” byte or an interview with her.

“Women reporters were trying to establish camaraderie with me,” she laughed and added, “I would get messages saying ‘we are women and we need to stick together and battle this.’ I would have probably met them if they had not added the agenda in their messages. No one for one second stopped to think that I am just a 20-year-old college student and it has nothing to do with nationalism. I am speaking out against violence on my college campus which I would not tolerate.”

Kaur being shoved into a media trial paints an exquisite picture of what is wrong with the way media covers any issue today. Social media websites are this generation’s first news source. I can vouch for it, when I say that any online journalist who worked on quickly writing a report on ‘The Gurmehar Kaur issue’, he/she was probably baffled at the idea that an old irrelevant video from over an year ago had trended to the point of becoming the sole piece of evidence to vilify the 20-year-old. And unfortunately, the social media narrative became the narrative of all media reports which juxtaposed her Facebook photo and the YouTube video. And the two unconnected events were now entwined. The actual issue at hand: Attacks on students and teachers in Ramjas College was not brought up by any newspaper or any television news anchor.

Kaur had held one press conference to clear her stand on the issue, considering that the focus had moved completely away from the real reason why newspapers started reporting on Kaur in the first place. Kaur subsequently pulled out from the march that she was supposed to participate in solidarity with the students who were attacked.

“I am a 20-year-old college student. My biggest problem (after the whole fracas) was the fact that I was not able to step out even for a cup of coffee and the fact that I am thinking of changing how I look so I don’t get recognised easily on the road. I got called the worst things on social media — things I cannot even think of repeating. I got threats of being raped. Why is there this whole environment where it’s OK to tell girls you’ll be raped if you voice your opinion? It was there for the entire world to see — my friends, my professors and my family. My mother, who raised me and my sister, were looking at my Twitter feed and reading everything everyone called me. How can an entire section of the civil society jump to such conclusions and malign someone and drag her dead parent in it. Should we not speak our mind?”

Maybe, I had let my emotions spill after hearing this because Kaur swooped in to assure me that the picture was not all that bleak. “I want to either be a journalist or a lawyer. I want to work for the United Nations,” she said. As I started collecting my notebook and decided that it was time to leave her alone with her stylist who was discussing different looks that would suit her, I asked her if she was given a choice would she join college protests any time soon, Gurmehar laughed and said, “I have had enough for a while now. So, no, maybe not.” New India might have dampened Kaur’s spirit, but it will only be a little while till she bounces back.