What Lonely Planet gets wrong about Namma Bengaluru

Bangalore is poised for greatness in 2012, or so claims Lonely Planet, the premier travel publication that ought to know. My fair city has been picked as one of the top ten cities for the coming year, keeping illustrious company with the likes of London, Hong Kong, Orlando and Muscat. And yeah, we are the only Indian city on the list, so Mumbai, Delhi et al are just plain out of luck. Even Jaipur with its celebrity weddings and fancy lit-fests didn't make the grade.

"Why now?" asks a dubious fellow Bangalorean, when I share the good news, "What is going to change next year?" Lonely Planet's explanation, unfortunately, doesn't offer too many clues:

The undisputed Elvis of South Asian megacities, Bengaluru is in a class of its own when it comes to redefining flamboyance. Perpetually drunk on the good life, this South Indian metropolis packs in the best brews, the scrummiest cuisines, and the liveliest arts and music scene, not to mention the hippest population you could hang out with. This year, evenings in the ‘capital of cool’ are poised to get even more intoxicating. And if the maddening traffic has always been your concern, take heart: Bengaluru’s new high-speed Metro network now ensures that your favourite watering hole is easier to reach than ever. There’s only one thing you could say to that: ‘Chill maadi!’ 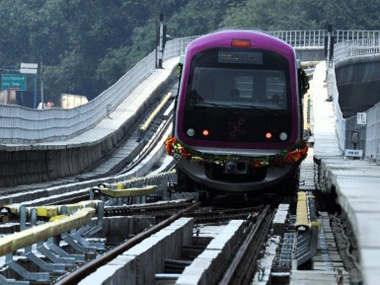 For the average native, the description sounds oddly retro, like it's been recycled from some newspaper story written back in 2005. Back when we were the bright, shiny and new Bengaluru; techno-brand ambassadors for India Rising; the “hot and hotter” city that made the likes of Tom Freidman drool. Most Bangaloreans today feel more like exhausted party-goers nursing a giant hangover from the bewildering excesses of the past decade.

The oh-so-happening Bangalore ushered in by tech-fueled prosperity is more often the villain in our mind, an out-of-control juggernaut that's mowed down so much of what we hold most precious about this city. Be it at dinner parties or over lunch at Koshy’s, the conversation inevitably swerves into a lament for all that is gone: felled trees, razed old bungalows, long-shuttered shops and restaurants, serenity, space, and quiet.

We survived the great IT boom, and all we got was traffic, pollution, and the Bangalore Central Mall. The 120,000 square monstrosity built on the ashes of the old Victoria Hotel, the mall is now a loathed symbol of our fool’s bargain. “I will never, ever go into that wretched place,” says an old Bangalorean. “I cried when they tore that beautiful building down.”

The lingering regret is less about returning to the past than a protest against the indignity of being forced to endure wave upon wave of change that we barely understand, and cannot control. We ache for what we were, for we fear what we have become. And in doing so, we forget all that still remains.

If Lonely Planet can be knocked, it's for entirely missing what makes our city great. And it's certainly not the cool bars, speedy trains, or trendy cuisine. (Hell, that's why we've even survived the 11:30 pm curfew) It's not because we are "the hippest population you could hang out with," but precisely because we have little interest in being the same. Bangalore's true, enduring grace is her people: Unselfconsciously and warmly cosmopolitan and broad-minded; intellectual and cultured without pretension or design; easygoing and friendly because they have nothing to prove – to you or the Joneses. Bangalore and Bangaloreans let you just be.

It's why, despite all the complaints, few of us would trade the Bangalore circa 2011 for some distant, glitzy shore — or the Bangalore of days bygone.

“It is one of the paradoxes of American literature that our writers are forever looking back with love and nostalgia at lives they couldn’t wait to leave,” wrote the literary critic Anatole Broyard. It’s a paradox that old Bangaloreans know all too well.

“This used to be a sleepy, little town with absolutely nothing going on,” says a 60-something friend who grew up in the city. “Any young person with talent or ambition couldn’t wait to get out.”

Therein lies the irony: the very changes that we are wont to knock are what makes it possible for many of us to stay put. "I love what I do, and I get to do it here," says a designer, "And that's the best thing about all that's changed. In the old [pre-boom] days, I'd have to move to Mumbai or Delhi – thank god, I don't have to."

The problem with nostalgia is that it isn't very useful. Obsessing about yesterday doesn't help build a better tomorrow. Lonely Planet may not quite 'get' the true charms of Bangalore, but its selection is a timely reminder of the future that still awaits. Yes, the Metro reference makes the jaded among us snort in disbelief.

"After all these years and money, we can now go all the way from bloody Indira Nagar to MG Road. Hurray for progress!" says my disgruntled friend.

But it's unveiling was the first moment of true shared excitement we've experienced in recent years. Above all, that shiny steel contraption reminded us that change can indeed be good. Yes, much has gone wrong, but it can be undone or remade again. A great city like London has been at various times a plague-ridden slum, giant-sized smokestack, and post-World War wasteland.

Surely, Namma Bengaluru will survive a Bangalore Central Mall. Surely, it's time we looked toward a future that is not imposed on us but created by all Bangaloreans, new and old.