High taxes have proved to be a dampener for Indians planning to visit Bhutan. Image courtesy Tourism Council of Bhutan

A Drukair flight from Kathmandu with 23 international passengers aboard landed at the Paro airport on 23 September as Bhutan reopened its borders for tourists after 30 months following the COVID-19 pandemic. The reopening has come with a revised tourism levy, known as Sustainable Development Fee (SDF), a tourist fee of $15 (Rs 1,200) per day per person from  India, Bangladesh and Maldives and $200 (Rs 16,000) per person per day for other nationalities.

Earlier, tourists from India, Bangladesh and Maldives had free entry while for other foreign nationals it was $65 per day fee which went as a royalty to the Bhutanese government. The new tax levied marks an end to the decade-long free entry to Indian tourists visiting Bhutan.

In Jaigaon, India’s bordering town with Bhutan, Pritam Gazmer, a tour operator and President of North Eastern Himalayan Association of Tour Operators (NEHATO) is having mixed feelings about the opening of the Bhutan Gate, a busy entry point to the Himalayan kingdom.

“I am happy that Bhutan is finally open for tourism after a long wait of over 2.5 years but the hefty SDF has left tour operators like us high and dry as there are very few bookings so far,” he said. Gazmer, who has been sending Indian tourists to Bhutan for 18 years, and has no bookings for this ‘Puja season’, a time of the year when many Indian tourists would travel to Bhutan mostly from West Bengal, Gujarat and Maharashtra. “Tourists are calling us for enquiry but opting out or diverting their travel plan to other neighbouring countries after knowing about the new SDF levied on tourists,” Gazmer said.

What are the fees?

Besides the Rs 1,200 per day per person for Indian tourists and $200 for foreign nationals  SDF also includes a mandatory tour guide which may range upto Rs 1,000 or may vary according to the service provider for a day and visitors can stay only in the hotels and homestays listed by the Tourism Council of Bhutan (TCB).

Most of these hotels are in the 3-star category or above.

“The new tourism rule has also introduced a fee of Rs 4,500 per day for foreign tourist taxis where the taxi driver will also be charged Rs 1,200 per day,” said Pasang Lama, President of Jaigaon Taxi drivers association, an association which has more than 50 drivers as members who ferry tourists from Jaigaon to various parts of Bhutan.

The country has also revised the entry fees to popular monasteries and dzongs, after a meeting of the  National Monument Committee held in July. For instance, entering the breathtaking Taktsang also known as Tiger’s Nest Monastery one may have to shell out Rs 2,000 or $25. According to the TCB website, there is a 50 per cent concession for children below 18 and kids below five years are exempted from entry fees. Mandatory travel insurance is another new addition that a visitor will have to incur while visiting Bhutan. Indians have an option to choose any domestic travel insurance at their point of entry. 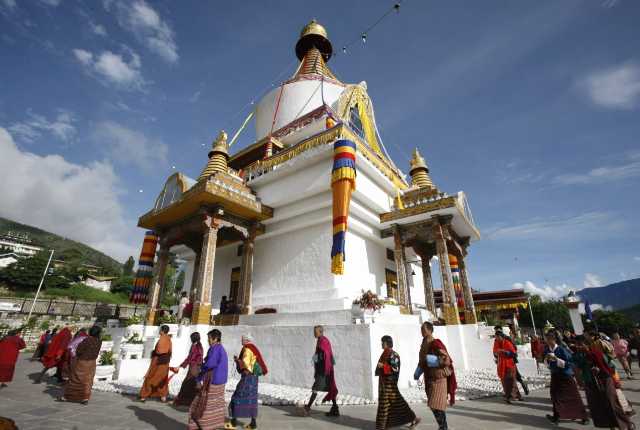 Visit to Taktsang also known as Tiger’s Nest Monastery will now be an expensive affair for Indians. Image courtesy Tourism Council of Bhutan

“The fee aims to fund the national exchequer and is also allocated to various projects that will enhance facilities, services and infrastructure for nationals and guests who visit Bhutan, as well as funding free healthcare and education,” said Dorji Dhradhul, Director General of TCB.

Meanwhile, according to industry experts, the SDF model is also touted to boost the country’s pandemic-affected tourism industry which suffered a major loss due to the COVID-19 lockdown. Tourism is one of the major economic drivers in Bhutan. Before Covid struck the world, tourism sales in Bhutan took up $120.00 million billion, 4.7 per cent of gross national product. Thus, each visitor spent an average of $380 on their vacation in Bhutan. But the pandemic changed the tourism scenario. In 2020, only $84.00 million billion remained which is a 30 per cent decrease.

Apparently TCB aims for a ‘high value, low volume’ model of tourism. But will it work for Bhutan where major visitors are middle class Indians? Of the 29,812 tourist arrivals in Bhutan in 2020, as many as 22,298 were from India. The levy of the new charges is going to divert large volume of Indian travellers, said an Indian tourism expert. However, according to Dhradhul from TCB, the SDF is not a new concept for tourism in Bhutan. The tourism industry in Bhutan was founded on the principle of ‘High value, Low volume’ and the SDF was introduced after the start of tourism business in the country in 1974. 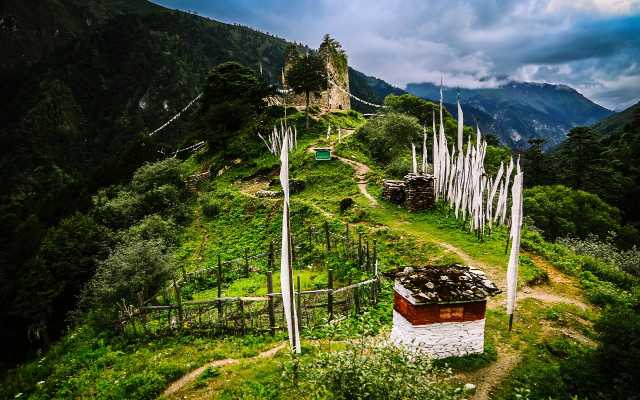 Exploring the mysteries of Bhutan will be a costly affair for Indian tourists now. Image courtesy Tourism Council of Bhutan

Bhutan has the highest tourist fee globally. Southeast Asia’s popular tourist destination Thailand is also planning to levy tourist tax ‘Kha Yeap Pan Din,’ a 300-baht($8) fee that will be levied on foreign tourists. Reportedly,  if the Thai cabinet approves it in October collection will begin starting next year.

In 2015, France started collecting tourist tax taxe de séjour , a tourist or visitor tax payable by adult visitors to France. As each local commune is responsible for setting the tourist tax, so the  amounts can vary depending on the category of accommodation. However, the rates range between €0.20 to €4.20 per person per night. A budget hotel owner from Chukha said under conditions of anonymity and expressed concerns on the situation of low and medium range hotel owners of Bhutan after TCB’s announcement that all tourists visiting the country should stay in 3-star or above rated hotels.

“Most of us have no bookings so far for this fall season or the coming year of 2023. We hope the situation will improve slowly once the government gives accreditation to budget hotels in the country,” the hotel owner said.

On the other side of the border, in Siliguri, Raju Chhetri, a tour operator, expressed a similar anxiety while talking about the impact of the new model to Indian stakeholders. “The Bhutanese government has restricted functions of both Indian and Bhutanese tour operators by allowing tourists to book their tours independently, which may be beneficial for the guests but tour operators will suffer a major backlash,” Chhetri said. Bhutan was always a once-in-a-lifetime kind of destination. The landlocked country with dramatic landscapes that offers its visitors a panorama of snow-capped mountains, magnificently ornamented monasteries, deeply traditional Buddhist culture and clean air to breathe will now need deeper pockets with the levy of the hefty new SDF but the country is still worth visiting.

The PSLV C54 carried the India-Bhutan SAT, along with India's Earth Observation Satellite -06 and other satellites from the Satish Dhawan Space Centre from Sriharikota, Andhra Pradesh, read the Ministry of External Affairs press release