The Force re-aligns: How the role of women in Star Wars has evolved You can toss other names into the mix: Buffy, Katniss, Arya, Kiddo, Furiosa, maybe even Princess Elsa, and you'd be mostly right, but citing these names is an exercise in tokenism: they occupy a few square metres on an obscure corner of the farthest field of popular culture.

Just take a look at the major films releasing this year and see how Black Widow and Wonder Woman, who are both strong costumed crusaders on their own on paper, are still part of the supporting cast in someone else’s film on screen.

So when a film franchise like Star Wars casts a woman as its lead character, without any frills and romantic interests, with a proper, functional and optimised-for-combat outfit, who flies spaceships and fights villains, and whose central purpose is not to be a love interest, it is a huge deal.

And Rey, played by Daisy Ridley, is not only the protagonist, but also the hero (word used in the strictest sense) of Star Wars: The Force Awakens. A potential Jedi, an able pilot, a formidable warrior; the lonely scavenger from Jakku brings together the best from the original trio of Luke Skywalker, Leia Organa and Han Solo, and is the rare fictional female lead, who is both believable and relatable.

It is an established fact that Star Wars has one of the biggest fan followings internationally, and has been a sub-culture in itself for over four decades now. A large section of people look to the films as reference points, as the record-breaking opening of the seventh installment of the sci-fi classic and the subsequent online frenzy proved.

A strong female lead in a film as impactful not only breaks the oft-adhered stereotype, but also reinforces gender balance.

Imagine the next generation of Star Wars fans growing up watching this film, imagine the positive impact it will have on young girls who will feel both represented and empowered.

Imagine them looking up to Rey as a role model.

Leia and Padme were royally reduced

Of course, this is not first time that Star Wars has cast a strong female character. Princess Leia Organa was a powerful protagonist, especially in The New Hope (1977). The young princess was a leader in the Rebel Alliance, had infiltrated the Death Star and had the plot to destroy it. She did not flinch when faced with Darth Vader, nor was she mollified by the flirtations of the charming Han Solo. She also played a part in the combat sequence.

This was as bold a female character in a fantasy film made in the 1970s as could be. Sadly, Leia’s defiance was toned down in the next two films where her role was shown in context of her relationship with the two male protagonists. She was portrayed firstly as a romantic interest in a potential love triangle, then as a girl being charmed by a 'scoundrel'; and was even given the token skimpy attire in the famous slave bikini.

Of course this is to take nothing away any of her gallantry in the films, be it strangling her captor Jabba the Hutt in the very chains that bound her, or going undercover to rescue her lover. However, when watched decades later, one can feel that there was something holding her character back. Maybe it was increased focus on Luke’s character, but Leia’s potential with the Force wasn’t completely explored. (Thankfully this peeve was gloriously redeemed by JJ Abrams in The Force Awakens, but more on that later.)

Similarly, in the Prequel Trilogy Leia’s mother Padmé Amidala was introduced as young queen and a politician who fought for democracy and liberty who was bold enough to stand up for herself in a crowd, shun the unwelcome attentions of a suitor and fearless enough to get into the thick of action with a blaster, as seen in Attack of the Clones.

However, her character devolvement was probably the worst part of a film series that has several terrible elements competing for the top spot.From a queen and astute politician, she was reduced to the secret, pregnant and helpless wife of the grumpy protagonist/antagonist Anakin Skywalker. Ultimately, she died of a ‘broken heart’, which goes on to show just how weak they portrayed her to be.

Having said that, it cannot be denied both Padmé and Leia are important figures in the Star Wars universe. But it is also true that at some point, they became side-shows, romantic partners playing the foil to the more flamboyant and crucial male leads, lacking authority to change the course of the story.

The difference is that Rey isn’t someone’s romantic interest (as yet), she’s a pure warrior who leads the story.

Why Rey is a strong female role model

Take a moment and think about this – Rey is the 21st-century equivalent of Luke Skywalker; a young, 20-something-year-old, who is the future of the Jedi knights.
As a young, 20-something year old girl who grew up watching Star Wars, this is the most inspiring aspect of the franchise’s revival for me.

Consider this: A few minutes into the film, Rey and Finn (John Boyega) are running away from the attack of the First Order and the chivalrous young man keeps reaching for her hand to aid her escape. She insists that she can keep up and is even ahead of him at times, yet he keeps reaching for her hand. “I know how to run without you holding my hand,” declares Rey and I cheered in the theatre. Here is a girl who is finally saying it!

Rey also outsmarts Kylo Ren mentally, beats him on physically and is able to master both blaster and lightsaber when the situation demands. And although not as relevant, she also wears a practical outfit and has only one costume change.
But my favourite moment in the film is when Star Wars’ original devil-may-care hero Han hands her a blaster ahead of a battle:

Han: You might need this
Rey: I think I can handle myself
Han: That’s why I’m giving it to you

Here’s Han Solo, a self-confessed scoundrel, a renegade and a hero from the original trilogy recognising that Rey is a woman who can handle herself. Of course this isn’t the first time he has seen a woman proficient with a weapon, remember Endor? But more important than his approval of her proficiency (a concept that can often be patronising) is his acknowledgment of her quality.

This is evident in the fact that he lets her handle his beloved Millennium Falcon and offers her a job alongside with him.

These appear to be tiny details in context of the larger picture of good v evil and finding Luke, but it is these that reveal the positive gender balance of the film.

The icing on the cake is that Rey is not the only woman who makes a difference in The Force Awakens. The original trilogy had only one main female character who actually had lines to say, the prequel trilogy may have had more women but their representation was even worse, but this instalment features several women in influential roles. 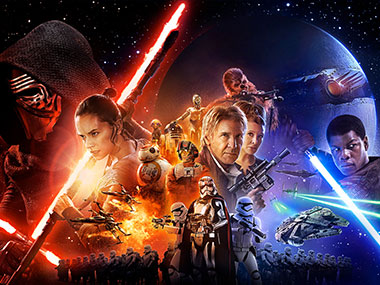 We have ‘General’ Leia, whose character development and representation is a detailed article in itself. Here is a woman, a former royal, leading the Resistance from the front, who has been allowed to age naturally on screen, whose grey hair and lines haven’t been glossed over, who is seen in the role of a leader, who is sown to be more than just a wife and a mother. From Princess to General, from lover to leader, Leia’s transformation from the original to now is profound.

The fact that Leia is the mentor in this film, functioning perfectly well without Luke or Han, is very heartening after her final few scenes as a spectator in Return of the Jedi.

Then there is Maz Kanata (Lupita Nyongo), who has been referred to as ‘female Yoda’; the wise, old one who ‘awakens the Force’, the one who the last Jedi trusted with the precious lightsber. Again, the fact that the Yoda’s position has been accorded to a woman, is a game-changer. There may not be Maz bobbleheads lining up in toy stores, but her pivotal role and presence in the new Cantina further repairs the gender balance.

A word of praise is due here for Gwendoline Christie's Captain Phasma, although she ended up having a minimal role in the film, contrary to what was promised in the trailers. She may appear to be a rule-abiding soldier with an extra-shining armour who was overpowered by a Wookie, but the fact that there is a woman under the Trooper suit was something completely unexpected in the Star Wars universe. A special mention here to the air combat scene toward the end. As the Resistance attacks the Starkiller base, we see female pilots. Once again, a women sitting in the cockpit of an X-Wing, shooting at TIE fighters was something unheard of.

This powerful female representation is not incidental, it was something that JJ Abrams always had in mind. Here‘s what he had to say on the matter:

“From the beginning of discussions (with writer Lawrence Kasdan), the notion of a woman at the centre of the story was always something that was compelling and exciting to me. And not just at the centre. We knew that, in addition to Leia who was a critical piece of this puzzle, we wanted to have other women – not necessarily human, but female – characters in the story. We wanted to have female stormtroopers, and pilots, which we did. We just wanted to make thing this thing not feel like it was not inclusive.”

But don’t just take my word for it, there is substantial proof of the positive gender balance in Star Wars: The Force Awakens; the film passes the Bechdel Test.
A popular online test, the Bechdel test is often used to gauge the treatment of women in fiction. The test is simple enough:

-Does a film feature more than one woman?
-Do these women talk to each other?
-If they do, is it about something other than a man?

In Star Wars: The Force Awakens, they do, unlike any of the earlier six films. And, while the test is in no way foolproof, the Bechdel test remains a great way to analyse gender balance in popular culture.

However, despite all the evolved gender representation, the patriarchal paradigm still exists beyond the screen in The Force Awakens. Rey’s action figure isn’t included in any of the major toy sets. The official Star Wars monopoly even went on to say that the absence was top prevent spoilers. This sparked of a great debate on twitter, it #WhereisRey trending. In response, retailers have promised that they will be out soon.

The gender balance in The Force Awakens has taken the Star Wars franchise into the modern times. Soon, we will see Felicity Jones playing the lead in the upcoming Rogue One: A Star Wars Story, a Star Wars spin-off. Hopefully this will set a positive precedent for female representation in pop culture. Till then, we are proud of our Leias and Hermiones, because we know that without these women, the journey would never be complete.