Washington: A new potent anti-HIV drug may effectively prevent vaginal and oral transmission of the deadly virus, scientists have shown in animal models.

Each year, 1.5 million women living with HIV become pregnant. Without effective treatment, up to 45 percent of HIV-infected mothers will transmit the virus to their child, usually through breastfeeding, researchers said. 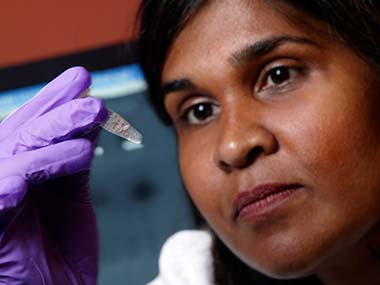 In an effort to prevent HIV transmission to women and their children, researchers from University of North Carolina at Chapel Hill (UNC) demonstrated the effectiveness of the anti-HIV medication, 4-Ethynyl-2-fluoro-2deoxyadenosine or EFdA, in pre-clinical animal models.

They found that EFdA can prevent vaginal and oral transmission of HIV.

"We discovered that EFdA can prevent vaginal transmission of HIV, which would prevent new infections in women," said Kovarova.

"In addition, we were also able to show that EFdA can prevent oral transmission of HIV which would prevent infants who are born to mothers already living with HIV from acquiring the virus during breastfeeding," she said.

In both studies, a once-daily dose of EFdA was able to prevent HIV infection in mice that were exposed multiple times to high doses of HIV. "We will now try to determine how low of a dose you can give while still providing protection against HIV, and how long the medication will last in your system to see if daily dosing is needed or if it can be administered significantly less frequently," said Kovarova.

"The majority of new HIV infections in women and children occur in developing countries with limited resources," said Angela Wahl, assistant professor at the UNC's School of Medicine.

"The availability of an anti-HIV drug that is potent enough to be used as a preventative agent in both women and infants has the potential to make a significant impact on the global HIV epidemic," said Wahl.

The findings were published in the Journal of Antimicrobial Chemotherapy.