Mythology for the Millennial: From Shurpanakha to Mahishi, angry women make for better stories

Happy New Year, Millennials and non-Millennials alike. You know the drill: it's a time for new beginnings, radical changes and stepping up with no excuses. I think it's also a great time to be talking about angry women, seeing all that went down in 2018, starting with #MeToo and ending with this Sabarimala thing.

It might surprise you to learn that even the legend of Ayappa hinges on angry women. Specifically: the goddess Chandika and her evil counterpart, the demoness Mahishi. Chandika came down to earth to kill a demon, and then Mahishi, his sister, sprung up, determined on revenge. Ayappa was created to stop Mahishi, one of those god loopholes, where she asked for the boon to not be killed by Shiva or Vishnu and they cleverly stepped around it by making a son together who would slaughter her. (Pro tip: read the small print in the god contracts.) However, was it not for Chandika and then Mahishi, Ayappa would not exist, so I think the angry women outside his temple have more rights than the men to enter, actually.

Angry women are terrifying in a different way from angry women within mythology; whenever the angry women come up, there's a sense of “we don't understand why they're doing it” almost bafflement. Obviously, this is because mythology was written down by men, so your viragoes are often also described as hideous, because there's nothing less attractive, apparently, than a woman who will not comply to gender norms. 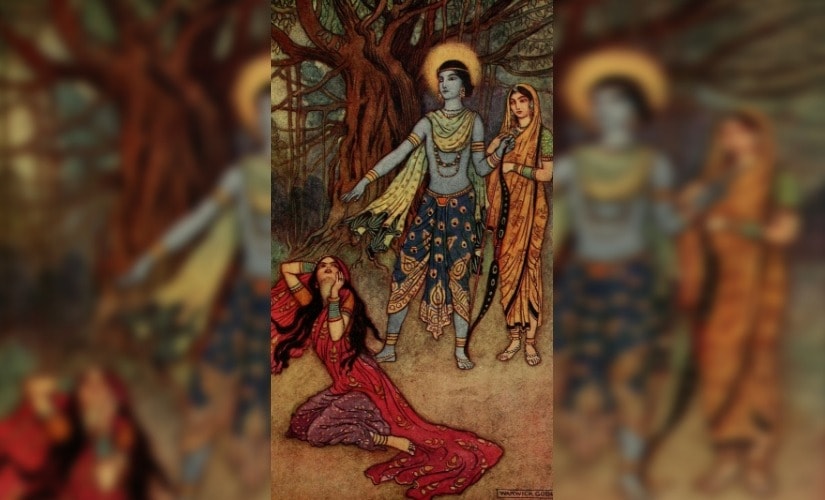 Demonesses have a bad rap in Hindu mythology. Their evil is usually not done just for the pure joy of evil, like the demons, but instead out of revenge or, in some cases, lust. The latter is most famously illustrated by Shurpanakha, Ravana's sister, where Valmiki — first credited author of the Ramayana — pulled out every sign of ugliness he could find to toss into her description. So Shurpanakha has cross eyes and a pot belly (way to fat shame, Valmiki), thin hair and a grating voice. But also really big breasts, because that means your heart is full of evil. Who wants to tell the modern day man that?

Anyway, at one point Shurpanakha was a beloved daughter, called things like Chandranakha, and she was meant to be really lovely. (One of her other names was Meenakshi, how's that for a namesake?) She married someone her famous demon king brother Ravana disapproved of; eventually Ravana killed the poor sap, leaving Shurpanakha widowed and back in her brother's house, which is where we can assume she put on the weight and grew the breasts and all that. She split her time between Lanka and a forest (the very forest where Rama, Lakshmana and Sita went to spend their exile), and on one of these trips, she saw Rama, was wildly attracted to him and proposed they Netflix and chilled.

Rama wasn't having it on the grounds that he was with his wife, and offered up Lakshmana, like a good wing man. Lakshmana however also rejected her — “not my type” he said — and Shurpanakha decided to attack Sita, because this is how we have internalised patriarchy: we always believe other women are the enemy, not the men who are treating us badly. As a result, Lakshmana cut off her nose and ear, which seems like an excessive punishment, and Shurpanakha went back home to her brother and sang the virtues of Sita, coaxing him to abduct her for his own. The lesson here is that while Shurpanakha and other female demons may have been willing to exact revenge on men for killing their kin, their relatives had no such loyalty and could only be poked into battle by offering a different sort of carrot. So, it's really all because of Shurpanakha that the Ramayana even became an interesting story, if you think about it.

So many stories of anger, I could go on. Gandhari, who bound her eyes when she learned her new husband was blind, and kept them bound (she definitely wins the Bird Box challenge) until several years later, when her son is killed in battle, the force of her gaze through the side of her blindfold shrivels Yudhistra's nails. Draupadi who brought about the Mahabharata battle because she was dragged into public during her period and shamed her men for allowing this to happen. Even Sita, meek and mild and that ideal for Indian womanhood, finally got fed up of all of Rama's questioning and asked the earth to just swallow her up.

May this be the year all women tap into our anger. God — or gods — know we need it.