A chance recommendation by fantasy writer RF Kuang led me to Chen Qiufan’s little-known novel, The Waste Tide, which is equal parts contemporary history lesson and science fiction. Published in Chinese seven years ago, a recent translation in English by Ken Liu has made the novel available to Anglophone readers who are likely unfamiliar with the history of the village Qiufan sheds light on. The Waste Tide is set in the fictional Silicon Isle which is closely modeled on the town of Guiyu in the coastal province of Guangdong in China. Guiyu is one of several places in the developing world where plastic and electronic waste generated in the West was shipped in order to save labour costs and bypass stricter environmental regulations in their own countries.

Though the author grew up in the nearby city of Shantou, he didn’t hear of Guiyu until well into adulthood when a friend who worked in e-waste recycling mentioned the town. Intrigued, he made a trip in 2011 to Guiyu which at the time was one of the world’s largest e-waste processing locations. The town, whose economy relied on this industry, received approximately 15,000 metric tons of trash each day. The visit deeply disturbed Qiufan who used his new-found awareness to write an eco-punk story that chronicles the environmental and public health costs that developing countries bore on behalf of the global community up until very recently. The import of waste was effectively halted in China in 2019. 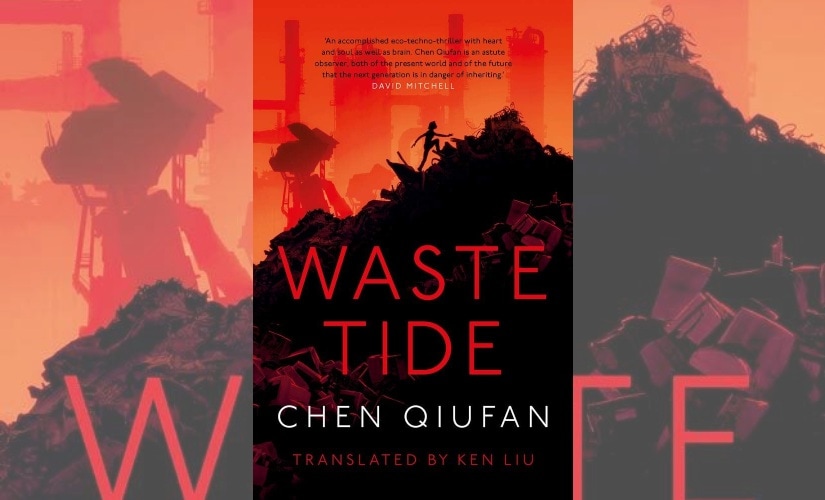 In The Waste Tide, migrants from impoverished families across China come to Guiyu tempted by promises made by recruiters, who travel to their hometowns and tell them that they will be able to turn their families’ fortunes around in a generation by working there. They are known, simply, as the "waste people". Mimi is one such young girl who works in the recycling plant with hopes of opening a store back home one day. The plants are owned by three local clans who prosper with the trade, but do not redistribute that wealth to provide their workers with safer and more humane working and living conditions.

The workers stay on because they are better paid in this business than they would have been in any job they could have secured back home. In Silicon Isle’s waste dumps, the workers sift through wires, discarded cyborg dogs, assorted plastic, fused circuit boards, prosthetic parts.

They have the dangerous task of manually sorting and disassembling this trash, from which trace amounts of valuable earth metals such as copper, gold and silver can be recovered through acid baths and heating. Silicon Isle’s water bodies are filled with industrial waste and the groundwater is undrinkable. The town’s air is choked with the smell of burning plastic. The soil and water are contaminated by the polluting processes of recycling which has also severely compromised public health and agricultural industry in the region. Though set in the near future, Qiufan’s world isn’t an apocalyptic vision – Silicon Isle borrows the above horrors directly from Guiyu.

Reading this novel has meant that I will never look at recycling in the same way again. Journalist and author of Junkyard Planet, Adam Minter, said in an interview, “I [want] people to realise that recycling is more than just a blue and green bin in their pantry…The responsibility of consumers is not just to throw things away well…we also have to take a certain amount of responsibility for generating that amount of garbage in the first place.” Consumers do not feature in The Waste Tide which focuses squarely on this tucked away world where products and spare parts are recycled but not in the way many lay people think of recycling. Silicon Isle isn’t creating greener products. What is left after precious metals are extracted for sale is discarded nearby or burnt in a process that creates poisonous fumes.

The novel explores tensions between the migrant workers and the Silicon Isle natives, as well as the well-off and the poor. It gives space to the cycle of poverty, addiction, vulnerability and exploitation that the industry has given rise to. Deep into the novel, as unrest rises, the workers say, “They call us 'the waste people'. Waste is dirty, inferior, lowly, useless, but omnipresent. They produce waste every day; they can’t live without the waste people.” The novel’s greatest lesson may be that trash is frequently invisible to those who create it — as are the people who process it, such as manual scavengers, the labourers in ship breaking yards and so on.

I lived opposite a dumping site all through my childhood in Goa, but I never wrote about it. It wasn’t a landfill, merely the repository of neighbourhood trash that municipality workers would clear infrequently. In my mind, it is a question worth asking – why was I never drawn to exploring trash in my writing the way I was drawn to oil spills and the beaching of marine mammals?

Why does our literature not reflect the vast amount of trash we create as a planet?

Was there less story and (complex) beauty to be mined from trash mountains, overflowing dumpsters and landfills? Perhaps, in my case, it was the naïve fact that the death of a whale felt tragic to me, whereas trash gathered on beaches, pavements and the sides of highways felt like an infestation and an inconvenience.

In his essay, Where are the Great Novels of Waste, Ned Beauman pointed out that the reading world was woefully bereft of fiction that features waste as a primary setting or a central character (presumably, he was referring to Anglophone literature). I struggled to recall many novels, poems or even creative non-fiction that focused on trash. A few exceptions that memory and research threw up were Don Delillo’s Underworld, Mridula Koshy’s Bicycle Dreaming, Paolo Bacigalupi’s Ship Breaker and Nancy Zafris’s The Metal Shredders.

What can trash as a concern in creative writing do? It can take up space – space it very much occupies in the real world. Depending on who we are, it can be a reckoning or a clarion call.

There are absences in writing that are deliberate and there are absences that are born out of ignorance, and Qiufan’s chance discovery of Guiyu and his subsequent novel is an example of what happens when we follow up on what we have accidentally or belatedly learnt.