48 life-changing lessons from the Zee Jaipur Literature Festival 2019; or, the One Listicle to Rule Them All

This article is an attempt to share with the reader some fine and important lessons learnt at the Zee Jaipur Literature Festival 2019: Five days of standing around, braving icy cold winds and attempting to look engaged at all times. We would be lying if we said these lessons are inconsequential or will not change your life dramatically. Above all, however, this article is a sincere attempt by the author to revive the lost glory of listicles. The rest is just an excuse.

1. Always have an introduction, or at least the first couple of lines, already worked out for your articles. It will save at least six to eight hours of your day. But it's quite all right if you can’t. Just jump right in and make your piece a long, self-indulgent listicle. Try also to come off as self-aware to avoid any editorial backlash.

2. Your cab driver in Jaipur will either be a suspended police officer from Haryana who believes if a girl’s mobile phone is on silent mode she is an "escort" (a word he most definitely would not use), or a lost soul who will ask you for advice about whether he should pursue LLB or Journalism in life (LLB is the correct answer). There is no third type. Please move along.

3. When sitting down for lunch at an outdoor venue, make sure you are at least a 100 feet away from any surrounding trees. In case a tree does come crashing down on you or your table and you survive, make sure you never leave a session midway (especially if seated in the very centre of a row right up front) ever again, as a way of thanking the gods.

4. There is always free water and career advice just around the corner. Both served matter-of-factly by strangers.

5. Socialising and networking are great. An unknown uncle of over 50 tricking you to hand over your phone to him so he can send himself an email — as a way of saving his email address on your phone — is not. 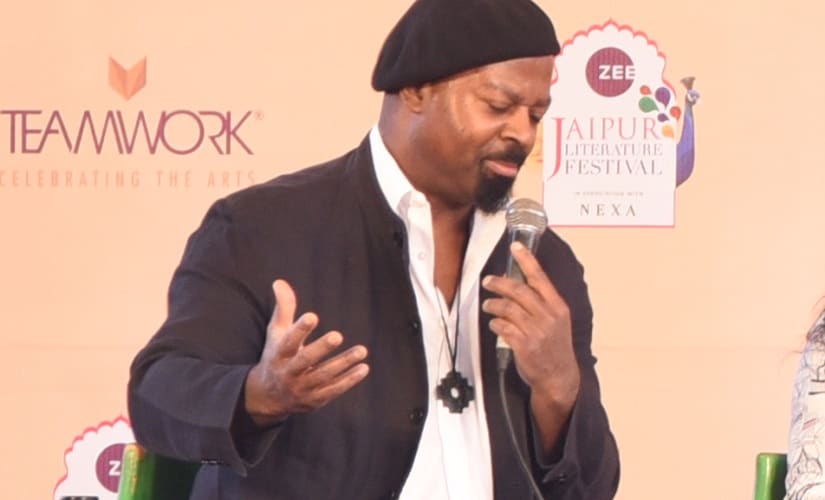 6. If organising the event, make sure you arrange for enough free (previously promised) drinks to accommodate the registered press and delegates. The sudden disappearance of drinking options on the third day might be a bit too much for some to comprehend, and surely enough to push a few over the edge and into the abyss populated only by moderators whose first language is not English or Hindi.

7. The Johnny Bravo hairstyle is a real life thing. You will have to take my word for it. But just know that the said subject was thoroughly observed, and the impossible can indeed be achieved.

9. If there is a fire near the stage, just shout something along the lines of, “Do we care?” from the said stage and have the audience of a few hundred — packed so closely that one can’t even move his/her hands — scream “No”. Everything will be just fine.

10. If it rained last night, the carpeted floor out in the open will still be wet in the morning. There is absolutely no need for you to put your bag — full of notebooks and scraps of papers containing vital information about the proceedings of the day — which will be in contact with your body for the whole day, on it.

11. If you ask someone to take your picture, please be respectful. There is absolutely no need for the pseudo-gang signs, the squinting of the eyes and the biting of the lower lip.

12. Unless you are Andrew Sean Greer, Carlo Pizzati or Chiké Frankie Edozien, you can probably do without that blue suit. If you are, well, you're faine.

13. Summer is better than winter.

14. If you are asked to interview (“just for a couple of minutes”) the spokesperson for the primary sponsor of the festival, by the festival team, at a venue and on a time decided by the same team, it will never happen.

15. Someone needs to make a British buddy cop movie starring Alexander McCall Smith as the good cop and Irvine Welsh as the not so good one. Set in Edinburgh, of course, the film will follow the two partners as they track down a new generation of drugs (Welsh, it will turn out, somehow had a personal stake in it) which makes its consumers extremely impolite (something McCall Smith cannot let happen on his watch). With a guest appearance by Ian Rankin, getting hit by an arrow as he crosses the street.

16. JK Rowling is apparently not that cool anymore with the hip crowd (exact reasons yet to be established, but the word "Pottermore" might have to do something with it).

17. If you are an author and you try and read from your book on the stage, a nearby generator will kick in at full capacity. This is not a myth.

19. Climate change, if you have been living under a rock where it has lately been unreasonably hot or cold or flooded, is real. And literature too cannot ignore it anymore. Some of the most original and captivating stories which have come out recently or are being written at the moment revolve around our environment. Time to put those reading glasses on and take notice.

20. Yes, I don’t live in Mumbai anymore, but still have a reasonably decent life and plenty of reasons to be alive. Thank you very much for your concern.

21. A great amount of fascinating work from Scandinavian countries still remains undiscovered by the readers of the English language. While some of it has to do with the lack of translations or distribution, many just lack the exposure in the mainstream media. It's as good a time as any for some great finds.

22. Men should stop sending unsolicited pictures of their genitalia to Anita Nair.

23. Later in his life, Ernest Hemingway returned to the exact spot in Italy where he was shot during the War. He dug up a hole, buried the pieces of shrapnel he had been carrying with him all his life and some money (as a repayment of the restitution he received from the country). But that wasn’t enough, he wanted to defecate at the spot in order to leave a part of himself behind. After trying for some time, while people waited for him nearby, nothing happened and he had to give up. Later, the man from whom Hemingway had borrowed a shovel to dig the said hole was discovered — aged 94 — by Hemingway's biographer. There is surely a lesson here somewhere.

25. Markus Zusak cares for his characters more than he does for his own children.

26. Maintaining four distinct folders in your computer, titled ‘Chronology’, ‘People’, something yours truly missed and tried to copy from a neighbour who had missed it too, and ‘Works’, is how biographies are written.

27. It’s impossible to deduce if Sanjeev Sanyal is being passive or aggressive at any given moment.

28. The future of biographies or any form of historical writing is pretty much doomed. Thanks mostly to WhatsApp. Think about that while you forward a video of a dog farting to your family group tonight.

29. The only things more colourful than the venue were Dan Jones’ shirts and tattoos, beating Alexander McCall Smith’s trousers by a slim margin. Paradoxically, and self admittedly, the man has a hard time being optimistic.

30. Oliver from Call Me by Your Name was originally supposed to die by drowning while out on a fishing trip. Then André Aciman saw the light. Make sure to say your prayers twice before you go to bed tonight.

31. Taking heavy and elaborate subjects with a panel of five and putting them into a half an hour slot is always a great idea and a glimpse into the future of literature festivals across the world.

32. Life is not a dress rehearsal. This moment will not happen again. So bring your best self on. Chiké Frankie Edozien is the savvy motivational speaker you were looking for.

33. Jeffrey Archer has all the qualities of a good politician — he can get the crowd going right off the bat with populist rhetoric, never settling down during an interview, getting carried away while retelling stories of his own glorious achievements, being elusive when asked about anything of general interest. One wonders what he might have... Wait, what!? Thatcher, did you say?

34. There is a difference between talking about your books and selling them so aggressively that one might wonder if your family is being held hostage and would be eliminated by you didn't sell n number of copies in the next 15 minutes. Please, ma'am, you can put down the hardback copies of your last three books now. Yes, the camera got them. Oh, there's another one? Two more?

35. Hardeep Singh Puri can really flex his vocal cords. And get pretty worked up. Real quick.

36. Hari Kunzru almost died at the festival. No, for real. Apparently, only a pasta salad saved him. Life is short, people. Finish those Netflix shows already.

37. *Once upon a time, Alexander McCall Smith went to Italy to work on a book. Upon his arrival, he realised, for some reason or the other, he couldn't get the car he had booked to get around. Someone (a chance encounter on his flight) then led him to a person willing to lend him a bulldozer. McCall Smith, of course, accepted it and drove it to his hotel. In the subsequent days, he got acquainted with a local priest who invited him to the country house of his brother for lunch. He also asked the author if they could perhaps go together in his bulldozer. McCall Smith, once again (and of course), accepted. The duo drove to the brother's house for a wonderful lunch. Later, the brother, also a winemaker, told McCall Smith how a stone wall prevents his wine from being sold as that of a higher grade, and if he would be gracious enough to move the said wall a little further away with the help of his bulldozer. As you might have guessed by now, McCall Smith agreed. Just like No. 23, there's a lesson here somewhere, please help yourself. [*This is an abridged version of the (maybe true) story.]

38. If you had one percent of Bee Rowlatt's energy, you could easily conquer the world.

39. Your incessant and loud awws in response to an author speaking on stage is exactly the kind of thing that investigators might later discover to be the lead cause of your disappearance without a trace.

40. Linger around the venue after the festival and you are sure to find grown ass Indians getting schooled in Indian history by foreign nationals, while you try and avoid making any sort of eye contact.

43. Irvine Welsh gets handed drugs fairly regularly by his fans at books signings and other events. He flushes them all down the toilet just before taking a flight. So just in case he gets arrested at an airport some day or if your water tastes a bit funny one fine day, you can guess what happened.

44. If your books get made into a movie, it's always a win-win situation. If it's any good, the sales for your books will increase. If it's not, at least people will say the book was better.

45. The Call Me by Your Name audiobook is narrated by Armie Hammer.

46. Having cows, sparrows, bees, monkeys and peacocks around the venue can come in handy when a panel has nothing to talk about, or you have brought a couple of kids along for some reason, or you are too polite to leave but need an urgent distraction.

47. It's easier to attain nirvana than to ask a straightforward question during a Q&A session.

48. In case of fatigue, just abandon the article.