The lush thick forest on a rainy day is one bad idea. But I kept walking on a brownish stony path. Instead of leopards and snakes, I spotted whitish baby mushrooms fruiting from dark mossy barks. Only little light penetrated through the dense tree line. This was an ancient world where creepers resembled snakes and the red orchids transformed into silent birds preening in the monsoon. I was headed into the supernatural hinterland Mawphalang — the sacred grove. The local belief is that the sacred grove still serves as a portal between worlds. Spirits still inhabit this forest and govern the realms. This is a holy place revered by all Khasi people — Christians and indigenous faith alike.

In 2016, the place gained prominence after Prime Minister Narendra Modi’s visit. And has since attracted thousands of visitors each year. And I managed to locate the man who was Modi’s guide at the stately visit. 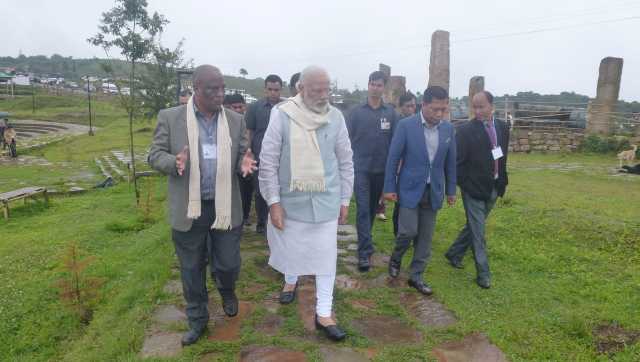 The elderly Tambor Lyngdoh, is a special kind of Christian. He believes in the Bible but also in his old god traditions. Having visited Mawphalang over 1,000 times, he hasn’t forgotten his first journey into the sacred grove. “I was a very young boy, and my uncle took me into the forest and told me that this is our mother. This is a part of our indigenous ways and all my ancestors including my grandmother has planted trees inside it. From now if I ever felt scared or I was in trouble, I should pray to the forest deities, and they will help.” Tambor has been studying and documenting the rich biodiversity since 1997, and gave me his Khasi/ English book, even before the interview began.

Mawphalang apart from being a spiritual pilgrimage, has been a major biodiversity hotspot with hundreds of rare plants. “Some that have gone extinct in the outside world still grow inside the grove. These include bio-luminescent mushrooms, oaks, 60 types of orchids, etc. Many researchers come here to study them, as no one is allowed to take anything including leaves, twigs, fruits, etc outside the grove. You can eat the fruit on the tree inside, but not carry it outside. Those who break this rule, forest deity’s wrath awaits you. Hence this grove has four orchids that are extinct and other varieties of trees that are not found anywhere outside,” Lyngdoh said. It has been over 700 years since the 12 clans of Mawphalng decided rules for forest management. They entail that forest will be protected at all costs and sub-tribal groups and councils are given steward rights over the forest. Tambor explained that earlier their land was ravaged by war and disease, and then the 12 clans prayed to the deity for rest and peace. “After the prayers, the deity came and settled in the forest. That’s why we have an elaborate ritual and altars built inside the sacred grove,” Tambor explained.

The red bull is the favoured sacrificial animal of Mawphalang. Whenever the clans are besieged by trouble, they perform sacrifices to find solutions. But it’s not as simple as it sounds. “There needs to be twelve people, representing 12 clans, and then we have to bring the sacred items like knives etc., in a particular order. We have our own special incantations and prayers, that must be said before we sacrifice the animal.” As Tambor was explaining, my mind wandered off to the scattered monoliths in the grove. They are arranged in a table kind of way. The standing monoliths represented the male element and the horizontal ones the female elements. 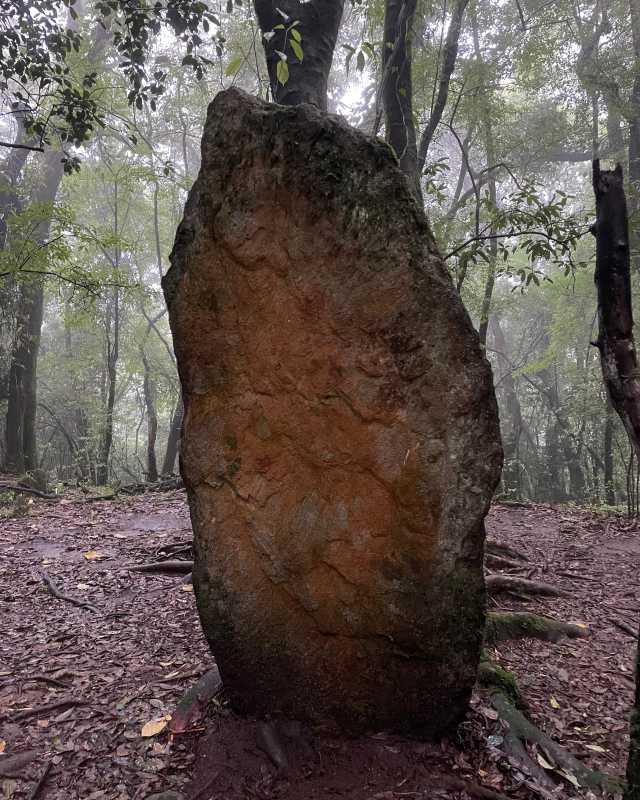 One of the scattered monoliths in the grove representing the male element. Image courtesy Indra Shekhar Singh

“Even if some Christian families don’t want to participate directly, they have to send someone to make the sacrifices at the given time. The leopard and the snake are the main deities here. Sometimes they appear in-person and other times in dreams. The snake appears as a warning and the leopard appears as a sign of protection and help from the forest deity. If one person does something wrong, the snake will appear as a warning,” Tambor said.

I was curious about the supernatural world and how it interacts with our world. I ask if Tambor had ever witnessed a supernatural event. “Earlier we have seen many people get possessed because of their wrongdoing. For example, there was a lady who took a leaf from the grove and then sickness befell upon her. Our past has many recorded stories,” Tambor said.

Tales of possession are not only common in Mawphalang but in sacred forests too. In fact, I have  heard such tales from Himachal Pradesh in the Himalayas to Jantia Hills in Meghalaya. But with changing times, things at sacred grove are also shifting. One of the biggest challenges to the sacred grove comes from the human world — climate change. Tambor was well aware of this threat and spoke about it- “The first signs of climate chaos are seen in proliferating fungal rot and pests on trees and roots. Incessant rain, hailstorms in May and rising heat are destroying the living biodiversity corridor. Only few know that this forest is part of the living corridor that stretches from Khasi hills to Bangladesh. Using this corridor plants and animals both travel to newer lands. This biodiversity refugia and the vegetational migration are being negatively affected by climate chaos in this area.”

After meeting Tambor, I drove to the sacred forest once again. The sun was setting lazily, fresh rain had bathed the forest and perfumed mist hung over the tree line. Here, Bashankupar Khonghat, a middle-aged sacred grove guide awaited me. He is still a follower of the indigenous faith but has cordial relations with Khasi Christians also. “Christianity in Meghalaya is very different. Many catholic pastors even adopted our rituals and traditional dresses and wore them during mass. Catholicism tried to integrate with our old ways, and hence there is no resistance. Of course, many here are Protestants too, but all have deep regard for the sacred grove and our old deities. Even today in times of sickness and trouble, practicing Christians come to indigenous faith healers and offer sacrifices to forest deities,” Khonghat said. We went for another walk in the sacred forest and while he showed me sacred plants from the Khasi oak to various orchids, I asked him about the blood sacrifices. “We don’t conduct sacrifices in the sacred grove anymore, because once, not long ago, the sacrificial bull broke loose and disappeared into the forest. We looked for it for hours but couldn’t find it. Our elders read this as a sign of the gods, and moved the sacrificial altar to a nearby meadow,” said Khonghat.

Did this time overlap with the entry of tourists in the shared grove, I asked Khonghat. He remained silent and then said, “maybe”, but he wasn’t sure.

There are many other places in Meghalaya hidden from outside world, where tourists are not allowed. The communities guard their sacred groves, but Mawphlang has opened up to the world. No doubt money is a new god and is making inroads here too. The Mawphlang complex is already commercialised, but perhaps that’s the way to survive in the age of gold.

Leaving the forest, I did feel the divine presence. After all which forest can survive for more than 700 years without god’s (Khasi or non-Khasi ) blessings? It was Nature’s holy place, where the Divine still touches us.

The writer is an independent agri-policy analyst, writer and agri-talks show host. He was also the former director, Policy and Outreach, NSAI. Tweets at @indrassingh. Views expressed are personal.