Jammu: The situation in all three regions of Jammu and Kashmir is totally peaceful, amid unprecedented security cover and restrictions, top officials said on Tuesday. There are no untoward reports from anywhere in the state, Director General of Police Dilbagh Singh said from Srinagar, a day after the Centre revoked Jammu and Kashmir's special status and proposed to bifurcate the state into two union territories. 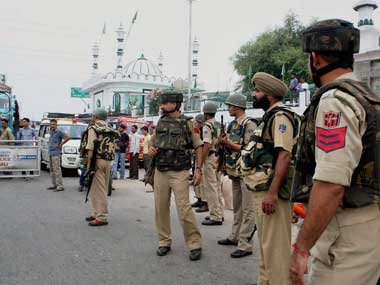 The law and order situation in Jammu and Kashmir is "totally peaceful", Singh said. In Srinagar city, where there has been a virtual communications blackout with few phones and internet connections, people who have urgent work are being allowed to move despite strict restrictions, Deputy Commissioner, Srinagar, Shahid Iqbal Choduhary said. He said the situation is totally under control and no reports of any untoward incident is reported from anywhere.

On Monday night, Jammu and Kashmir Governor Satya Pal Malik reviewed the security situation with senior officials and emphasised the need for constant alertness and preparedness to deal with any eventuality. According to a Raj Bhavan spokesperson, the governor held a meeting with top officials and reviewed the prevailing security and law and order scenario in the state.

Former Jammu and Kashmir chief ministers Mehbooba Mufti and Omar Abdullah, who were under house arrest since Sunday night, have been arrested on Monday night as they were treated a threat to the law and order situation, officials said.

Jammu and Kashmir People's Conference leaders Sajjad Lone and Imran Ansari were among over a dozen who were arrested, they said.
Orders of their arrests were issued by magistrates in view of their activities to cause breach of peace and tranquillity in the Valley.

In Jammu region, night curfew was imposed in Kishtwar and Rajouri areas and restrictions under Section 144 CrPc were imposed in all the districts of Jammu region, the officials said. "The situation is totally peaceful. There were no reports of any untoward incident from anywhere. Night curfew was imposed and restriction are in place," Deputy Commissioner Kishtwar A S Rana said.

Deputy Commissioner Doda DS Dattatray said the situation remained peaceful in Doda and have appealed to people to maintain peace and tranquillity. All educational institutes across the state are closed for the second consecutive day, the officials said.

In Kargil, a Joint Action Committee has called for a shut down to protest against the decision. On Monday night, Jammu and Kashmir Governor Satya Pal Malik reviewed the security situation with senior officials and emphasised the need for constant alertness and preparedness to deal with any eventuality.

According to a Raj Bhavan spokesperson, the governor held a meeting with top officials and reviewed the prevailing security and law and order scenario in the state. The governor stressed the need for ensuring safety of general public and advised the administration to give due consideration to the genuine needs of the people in the current scenario, the spokesperson said.

Reviewing the law and order situation and preparedness of the government machinery, Malik emphasised the need for constant alertness, preparedness and synergy among various departments and agencies to enable dealing with emerging situation in a coordinated and effective manner.

The governor reiterated the need to constantly maintain a close watch on the ground situation and underlined the importance of sustained efforts to bring peace and harmony in the society for overall benefit of people.

Malik has appealed to the people and leaders of various social, religious and political organisations to cooperate with the government machinery to maintain law and order in the state, the spokesperson said.

Army's General Officer Commanding-in-Chief Lt Gen Ranbir Singh also met the governor on Monday night and briefed him about internal and external security situation, he said. The Army officer also apprised him of the preparedness for addressing any eventuality, the spokesperson said.