The latest investigation into the safety or the lack of it of packaged drinking water comes from Eenadu, a leading Telugu daily in Andhra Pradesh and Telangana. Predictably, after testing all the samples that it had collected from the two states, at a laboratory, the newspaper found that most had deadly bacteria and other harmful impurities, and were unfit for consumption.

In an exhaustive report published on Friday, the paper said that about 20,000 unlicensed "water purifying plants" in the two states are throwing all norms to winds and are supplying polluted water that jeopardises people’s health in a big way. 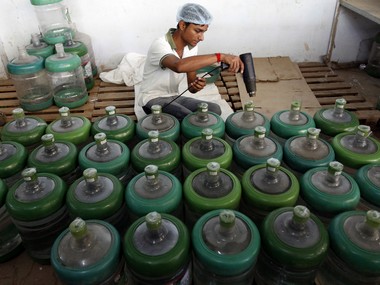 A third of the samples that Eenadu tested contained E-coli, a faecal bacteria found in the intestines of humans and animals, that causes diarrhoea. Another one-third were found to be unfit for consumption. Other samples contained hazardous contaminants including pseudomonas, salmonella and staphylococcus. Samples collected from Hyderabad were found to be polluted with sewage water.

The investigation by Eenadu is not the first of its kind and won’t be the last either if the health authorities do not clamp down on what is clearly a nation-wide scam.

Some twenty years ago, my colleagues at a newspaper conducted a similar investigation and found that bottled water of even well-known brands contained impurities beyond tolerable limits.

Just as the demand for packaged water is going up in India, fraudsters are mushrooming across the country to make quick bucks by inundating the market with polluted and harmful water. Officials of state and central governments are throwing up their hands, claiming to be helpless.

Mumbai’s bottled water may cause cancer

This is not to cause panic, but only to caution consumers that a significant amount of what passes off as packaged water that comes in both bottles and bigger cans in India is not only impure but even harmful to health.

During 2014-15, Maharashtra’s Food and Drug Administration (FDA) raided 95 water packaging plants in the state, including ten in Mumbai, and tested samples collected from them. Of the 95 samples, 28 were found to be contaminated with bacteria and 23 didn’t meet quality standards.

Four scientists of the Environmental Monitoring and Assessment Section of the Bhabha Atomic Research Centre analysed commercial brands of packaged drinking water available in Mumbai for the presence of bromide, bromate, chlorate and chlorite. Their startling findings were published in the January 2015 issue of Current Science.

They found that, in 27 percent of the Mumbai samples, the proportion of potentially cancer-causing bromate was higher than the World Health Organisation (WHO) guideline value.

Centre calls it a problem of states

Answering a question from Santosh Ahlawat, BJP’s Lok Sabha member from Jhunjhunu in Rajasthan, consumer affairs minister Ram Vilas Paswan told the Parliament in May 2016 that of the 734 samples analysed across India during 2014-15, as many as 226 were adulterated.

Paswan made it clear that the implementation and enforcement of Food Safety And Standards Act – 2006 and the rules framed under it, which govern the packaged water industry as well, "primarily rests with" governments of states and union territories.

According to Paswan’s information tabled in the Lok Sabha, detection of impurities found in packaged water during 2014-15 in some of the states is as listed in the table below.

Demand for packaged water shoots up

The awareness that tap water supplied by public drinking water supply systems is unhygienic and the belief that bottled water is pure and safe has caused a major boom in the packaged water industry in the last two decades. While many Indians, and not just tourists, picking up water bottles from roadside shops is a fairly common sight, water cans of 20 litres or more are increasingly becoming fixtures in Indian kitchens, with the convenience of home delivery significantly adding to their popularity.

In the last five years alone, the industry has more than doubled in worth to Rs 16,000 crore. While giants like Bisleri, Pepsico, Coca-Cola and Parle take a major share, largely in metros, small players have been steadily stepping in to rake in the moolah in smaller cities and towns.

This breathtaking growth and the proliferation of companies has led to greedy and unscrupulous elements flooding the market with substandard and potentially harmful products.

Some just fill bottles, unhygienic ones at that, with water from wells or taps and palm them off as "bottled water". Some set up so-called water-purifying plants in garages or cowsheds or in the backyards of their homes and operate them with no trained staff. A 2003 study found pesticide residues in bottled water sold in Delhi and Mumbai.

The Bureau of Indian Standards (BIS), which regulates the industry, has laid down that water must be subjected to processes called pressure sand filtration, activated carbon filtering, reverse osmosis, ozonisation and ultraviolet treatment before it’s packaged and sold.

Many plants are run without the mandatory approvals from the BIS as well as Food Safety and Standards Authority of India (FSSAI). While it may need an investment of up to Rs 20 lakh to run a legal and hygienic plant, many jump into the business with just Rs 2.5 lakh with some sort of equipment that contaminates more than purifies the water.

Even if a water purifier is perfect, it creates other problems because water purification is much more than just getting rid of impurities. While the reverse osmosis process takes away impurities it also removes from water most of the calcium and magnesium, essential for good health. The purified water must also be “remineralised” to bring back the minerals.

How to check if your water is safe

Also, it's important is to check whether or not the container carries the ISI mark which the BIS awards. To find how a genuine ISI mark should look like, check this link. And to find out whether or not the ISI certification on your packaged water is genuine, click here and then click on 'status of licenses'. Type in the license number that follows the letter CM/L under the ISI mark on the container of the packaged water and then click on 'report'. If the certification is genuine, you will see the name of the company, address and phone numbers. Check if these details are the same as what you see on the container.

But what if a fraudster copies the ISI certification and other details of a genuine company on his containers? There's very little you could do in a situation like this apart from alerting the BIS or local health authorities. In cases of such frauds, the chances of you going to a hospital on account of consuming contaminated water are more than that of the criminals responsible for it going behind bars.