New Delhi: A parliamentary panel has rejected the home ministry's suggestion that the overall internal security scenario in the country was under control in 2016, saying Jammu and Kashmir remained on the boil throughout the year and there was a "huge upsurge" in the number of infiltration attempts.

The Parliamentary Standing Committee on Home Affairs, headed by senior Congress leader P Chidambaram, also said lack of financial resources has resulted in the loss of lives of police and paramilitary personnel in the fight against Naxals. 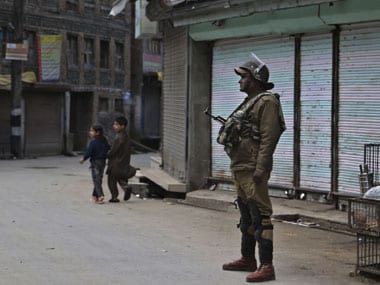 "The committee does not share the perception of the ministry that the overall security scenario remained under control during 2016," the panel said in the report submitted to the Parliament on Thursday.

"While the terrorism in the hinterland of the country and the Left Wing Extremism (LWE) remained comparatively muted during 2016," it said, "the opposite is however true in the case of cross-border terrorist attacks in Jammu and Kashmir which remained on the boil throughout 2016 due to a number of terrorist attacks, and huge upsurge in number of infiltration attempts – 364 in 2016 as compared to 121 in 2015."

The committee said a new trend of terrorists targeting security establishments of paramilitary and armed forces has emerged.

"The committee is constrained to note that 82 personnel of security forces were martyred last year. At the same time, the committee is anguished at the vulnerabilities and loop-holes in the security of the establishments of the forces exposed by a series of terrorist attacks that occurred in 2016," the report said.

The panel recommended the home ministry must make rigorous efforts to completely stop infiltration from across the border and prevent all types of terror activities in Jammu and Kashmir.

The security of the establishments of the forces should be tightened and attacks on them should not be allowed to recur. The panel also referred to the recommendations of the committee given following the 2 January, 2016 attacks on the Pathankot air base.

It said that despite several steps reportedly taken by the government to strengthen the security measures, it failed to prevent recurrence of such attacks and, Pampore, Uri, Baramula, Handwara and Nagrota were targeted.

"The committee, therefore, recommends that there remains an urgent need to further strengthen the security network and plug the serious gaps in security establishment and intelligence gathering/sharing that have come to the force in the recent attacks," it said.

The panel observed that lack of financial resources is becoming a reason for the loss of lives of police and paramilitary forces in the battle against the Left-Wing Extremism.

"The committee feels that bullet-proof vehicles would not be safe or sufficient for use in LWE areas," it said.