The death of the Unnao gangrape victim led to nationwide outrage on Saturday with protests erupting in several places, including Delhi and the Unnao rape victim's village.

Reactions poured in both on social media as well as on television news channels with the victim's family demanding the accused be "chased and killed" like in the Hyderabad rape case. The Congress meanwhile flayed the Centre and terming Uttar Pradesh the rape capital of India while highlighting the poor law and order situation, went after the Yogi Adityanath government for failing to provide security to those brutalised by sexual violence.

In the National Capital, members of Indian Youth Congress (IYC) and National Students' Union of India (NSUI) took out a candlelight march demanding justice for the family of the victim. Protests were also held in support of Delhi Commission of Women chief Swati Maliwal, who has demanded that the accused be hanged within a month. They were fired on with water cannons, reports said. Activists take part in a candlelight march in solidarity with rape victims and to highlight the issue of violence against women in the country, at ITO, in New Delhi. PTI

The Uttar Pradesh government on Friday promised to set up a fast-track court for the speedy delivery of justice in the Unnao rape case, a house and Rs 25 lakh ex gratia to the family of the gangrape victim, who died following a 40-hour ordeal on Friday night.

The 23-year-old rape victim, who was airlifted to Delhi and admitted to Safdarjung Hospital with 90 percent burns after being set afire by the accused, died following a cardiac arrest at 11.40 pm on Friday.

The Unnao rape victim was set on fire when she was on her way to Raebareli in connection with the court case filed by her. Five accused, including two who had allegedly raped her, were arrested soon after.

Other facilities to be extended to the family will be looked at the local level, Additional Chief Secretary Awanish Awasthi told PTI.

The post-mortem of the Unnao rape victim showed that she died of extensive burn injuries, a senior doctor at the Safdarjung Hospital said on Saturday.

The doctor said, "According to the post-mortem report the victim died of extensive burn injuries. There was no indication of the presence of any foreign body, poisoning or suffocation on the body of the woman during post-mortem conducted this morning."

On Friday, Dr Shalab Kumar, Head of the Burn and Plastic Surgery Department at the hospital said, "Despite our best efforts, she did not survive. Her condition deteriorated towards the evening. She had a cardiac arrest around 11.10 pm. We tried to resuscitate her, but she passed away at 11.40 pm." Unnao rape case victim's body being taken away after the post-mortem at Safdarjung hospital, in New Delhi. PTI

“Will I make it out alive? Please save me" were the words uttered by the victim on Thursday night, a day before she succumbed to her hnjuries.

Medical Superintendent of the hospital Dr Sunil Gupta said, “She was conscious when she was brought here last night at 8 pm and was speaking, though very feebly. She told us repeatedly not to let the accused go free. She asked the doctors if she will make it out alive. She told them, “Save me, I want to live.”

Her family took her body back to her village in Unnao district by road after post-mortem.

'Accused should be chased, killed'

Stating that the perpetrators responsible for her death have no right to live, the victim's father and brother demanded that they either be chased by police and killed in an encounter or be hanged to death.

"I want to see the accused persons being chased and shot dead," the victim's father said at their house in Unnao.

"I do not want money or any other kind of help. I want to see that the accused are chased and shot dead like the Hyderabad encounter or hanged to death," he said. The woman's brother also made a similar demand for killing the accused either in an encounter or by hanging. He said his sister will get justice only when all those responsible for her death "will go to the place where she has gone".

His demand for instant justice has found support both on social media as well from the Hyderabad gangrape and murder victim's kin.

The Unnao woman died on the day four accused in the Hyderabad gangrape and murder case of a veterinary doctor in Hyderabad were killed in an encounter with the Telangana police.

Uttar Pradesh minister Swami Prasad Maurya, who had visited the Unnao victim's family on Saturday along with BJP minister Kamal Rani Varun and Unna MP Sakshi Maharaj, were heckled by protesters during their visit to the Unnao rape victim's village.

A number of protesters, including some local Congress leaders sustained injuries as police used force to disperse the crowd which gathered outside the residence of the victim and shouted 'Vaapas Jaao, Vapaas Jaao' (go back) and raised slogans against the state government and the Unnao MP. The sloganeering continued for 15 minutes. Police used force against the protesters after which the two ministers and the MP could be taken to the victim's home, villagers said.

Following his visit to the victim's family, Maurya said, "The chief minister is very much with the family of the deceased in this hour of crisis. The culprits will be dealt with sternly and punished. A fast-track court will be set up with this view in mind." 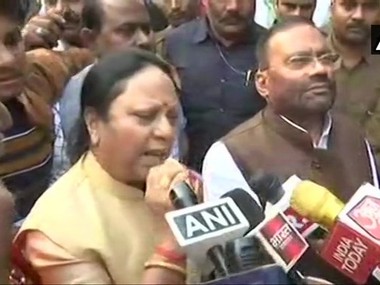 BJP leaders Kamal Rani Varun and Swami Prasad Maurya were heckled during their visit to the victim's family. ANI

In Lucknow, police baton-charged Congress workers who staged a protest against the government in Hazratganj outside the BJP headquarters.

Samajwadi Party president and former Uttar Pradesh chief minister Akhilesh Yadav sat on a 'dharna' outside the Vidhan Bhavan in Lucknow and blamed the BJP government for the death of the woman and sought its "removal".

Offering his condolences, Congress leader Rahul Gandhi said, "The saddening and heart-wrenching death of the innocent daughter of Unnao, that has shamed humanity, has left me angered and stunned. Another daughter has lost her life while awaiting justice and security."

His sister and party general secretary Priyanka Gandhi Vadra, who met the victim's family in Unnao, accused the Uttar Pradesh government of patronising criminals, which led to recurrent crimes against women.

Alleging that the BJP government had created such circumstances that there was no fear in the minds of criminals in the state, she urged the Adityanath dispensation to take seriously the issue of violence against women.

"They (the BJP government) are saying that there is no place for criminals in Uttar Pradesh. But the way in which anarchy has spread and crime against women is taking place in the state, I wonder if in the Uttar Pradesh made by them there is any place for women," she told reporters.

She also took to Twitter to blame the state government for its "hollow law and order mechanism" apart from society's collective failure that prevented justice from being delivered to the woman.

"Why the victim of Unnao gangrape case was not given security keeping in mind an earlier incident of Unnao? What action has been taken on the police officer who refused to register an FIR? What steps are being taken by the government to stop crime against the women, which take place on a daily basis?" she tweeted.

She was referring to another such alleged attack in the district in July when the car in which a woman, who had accused BJP MLA Kuldeep Sengar of raping her, was hit by a truck.

Uttar Pradesh labour minister Maurya reiterated that the guilty persons will not be spared. "A criminal is a criminal. If anyone tries to save the guilty persons, he too will be dealt with strictly by the law," said Maurya. Police use batons on Congress workers protesting in front of UP BJP headquarters in Lucknow. PTI

BSP supremo Mayawati asked the UP government to ensure "proper justice" to the victim's family, saying the young woman's death was extremely painful and that her party was with her family in their hour of grief.

"To prevent such traumatic incidents all over the country, including in Uttar Pradesh, state governments should create fear of law among people and in view of the incidents, the Centre should also make a law to ensure strict punishment by hanging to death within a stipulated time-frame," Mayawati tweeted.

She also urged the Supreme Court to take suo motu cognisance of the growing incidents of crime against women and direct the Centre to take prompt steps for effectively checking them.

In Delhi, Congress spokesperson Supriya Shrinate demanded strict action against the accused in the case and said it is "not the first and this will not indeed be the last case if you (UP government) don't wake up. The state government seems to be in a dying hurry to become the rape capital".

She also said that "more than assurance, the Uttar Pradesh government needs to strengthen law and order in the state. Our question is to the state police is why FIR was not registered in four months and why the accused were left out on bail".