One jawan was killed and a terrorist gunned down in an encounter between terrorists and security forces in Pulwama's Samboora village on Thursday. The encounter is still underway.

Meanwhile, a BSF jawan was killed when Pakistan Rangers fired at a patrol party along the International Border (IB) in Jammu and Kashmir's Samba district, drawing heavy retaliation from the Indian force in which three posts were damaged and two rangers injured. 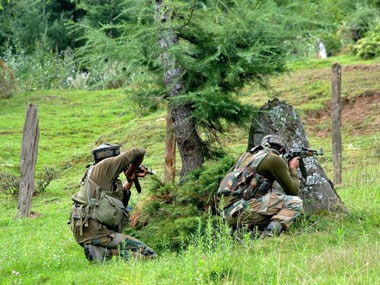 On Sunday, an encounter between militants and security forces had broken out in north Kashmir's Bandipora district where two militants had been killed, police said.

Another unidentified militant was shot down in an encounter with security forces in Hajin area of Handwara in Jammu and Kashmir a day before.

Security forces launched a cordon and search operation in the Samboora village of Pampore area on Thursday evening following information about the presence of the militants there, an official said.

As the security forces were conducting the searches, militants opened fire, he said adding that a gunbattle ensued as the forces retaliated.