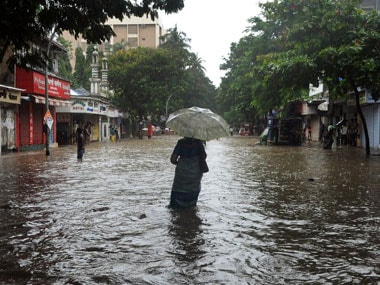 After heavy showers lashed the city through Thursday night, Mumbai came to a standstill on Friday morning. 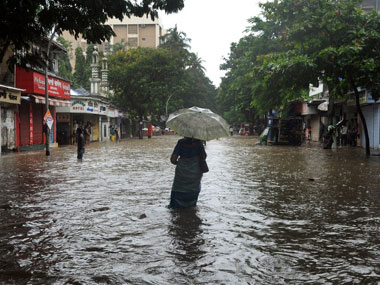 BMC has appealed to people not to leave houses. Heavy rain and deluge in Mumbai. An alert has issued for high tide at 2.30 pm.

Incessant rains lashing Mumbai since last night disrupted normal life resulting in suspension of train services on the busy Central, Harbour and Western lines due to water-logging of tracks and in low-lying areas.

Thousands of commuters, bound for offices and other work places, were caught unaware at suburban stations around the city as railways announced suspension of services.

In total, around 70-80 lakh people travel daily by local trains across all three lines, which are called as lifeline of the city.

Railway sources said it is difficult to say by when the services would be resumed. The city has been battered by heavy rains since last night.

Meanwhile, rain services on the Western line were also cancelled. The railways have advised commuters to avoid travel in view of the situation unless it is very urgent.

"Suburban services are affected due to heavy rains and water-logging in several areas in Mumbai Central and Matunga. It is advised to all that commuters may travel only in case of emergency," Western Railway stated in a release.

On the city's Western Railways, trains were operational only up to Andheri, according to reports.

In light of the heavy rainfall, the BMC has requested schools to remain shut today.

Looks like all trains on d western line r cancelled. Got these pictures via WhatsApp. Stay at home ppl. #MumbaiRains pic.twitter.com/yjuekhruQQ

Where the hell is road man its all pani pani here#MumbaiRains pic.twitter.com/MfGm8EkUSV

From 8 am to 8 pm on Thursday, the city received 60.34 mm rainfall, while the eastern and western suburbs received 57.48 mm and 64.92 mm rainfall, respectively, the Indian Express reports.

The Indian Meteorological Department (IMD) director said that the expected rainfall might be heavy to very heavy for the next 48 hours on Wednesday.

“Rainfall is expected for the next two days, intermediate sometime heavy” said V K Rajeev Director of IMD, according to a report by Mid-Day.

Uptil 17 June, the city has recorded 236 mm of rain and Mumbai was still below the halfway mark of monthly average rain of 523 mm, according to SkyMet.