World Environment Day | 5 June is observed as the World Environment Day: another semblance of an event to perhaps celebrate how precious and beautiful Planet Earth is, and also to take a moment to realise the extent of destruction we have wreaked on it. However, for some people, the quest for restoring the environment to its former glory isn't just a 24-hour-long drive, but is in fact, a year long battle. This correspondent spoke to some of the warriors who stand at the forefront in the war against pollution to understand what celebrating world environment day means for them. 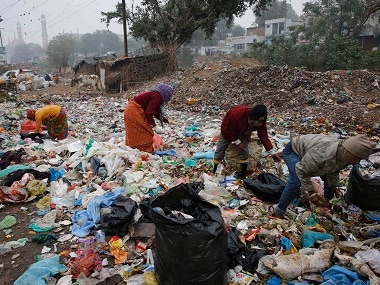 Give her 5: Shivani Swamy was first introduced to the problems faced by women of menstruating age group in rural India when she was working to install community water purifiers in the villages. She saw that although the overall health situation was improving, thanks to many awareness campaigns, policy interventions and work of countless NGOs, girl students were still missing from schools. Shivani soon realised that the cause of this was the inaccessibility of sanitary products catered specifically to their needs. She also realised that the only way to dispose off the existing products was to either throw them as waste or to incinerate them. Both these options are extremely harmful to the environment.

The solution she came up with was called Saafkin.

Saafkin is an eco-friendly reusable and biodegradable sanitary napkin. In look and feel, it is closer to the traditional cloth napkins the rural women are used to fashioning out of discarded clothes at home. But it also incorporates high-end technology to make it anti-bacterial, which makes all the difference to women hygiene. Swamy said that each woman generates a whopping mass of 145 to 150 kilogramme of non-biodegradable sanitary waste in her lifetime. Saafkin brings that amount down to less than 2 kilogramme in a lifetime. Furthermore, since most of the product is made with natural fabrics, even that small amount is easily and safely integrated back into nature. She also launched a fundraising campaign called Give her 5, where anyone can donate Rs 200 to adopt the sanitary needs of one rural woman. It is a revolutionary step towards changing the lives of these women while keeping the menstrual waste at a minimum. Swamy exemplifies the belief that improved sanitation doesn't have to come at the cost of the environment.

Protect_mumbaiscoast: The first step towards change can make a big impact. The fight against climate change can always start with baby steps. And this is reinstated in the efforts put in by an 18-year-old Mumbai resident whose Instagram page, Protect_mumbaiscoast is making all the right noises. She chooses to remain anonymous because she says, "The cause is bigger than one person and I don't want it to be about me."

When she first heard about the coastal road project, she was a big supporter of it. However, she soon realised that she had not fully comprehended the implications of the coastal road. In an attempt to change that, she started attending talks around the city that explained the consequences of the road. These talks deeply affected her as she finally grasped the extent of environmental damage the coastal road could wreak. "The problem is that most people my age don't really know what it is and think that it's such a great idea without fully comprehending the consequences," she says. She started the page after attending a protest that displayed the diverse marine life that thrived on the coasts of Mumbai. She says she was deeply moved when she realised that all these rich ecosystems will be destroyed when the road is built. She also noticed that the protest was mainly comprised of older people. She thought it was the responsibility of the younger generation to take a stand for their city. "When you see things on a grand scale, it is easy to say that there is nothing you can do about it but this is happening in our backyard. We don't have an excuse anymore," she states. Her page is just the first step in her fight. She has great plans for the upcoming battle and she is not going to let anyone drown her voice as she fights for her planet.

Green Practices: The seed of an environmental revolution was first sown in Mana Chatterjee’s head as she watched Al Gore’s movie Inconvenient Truth. Putting all her savings on the line, she was determined to make a difference. She was forced to learn how to convert her passion into a sustainable business. Chatterjee taught herself about markets and price points through online tutorials. All this hard work finally paid off when her company Green Practices was born.

Green Practices provides its customers a chance to enjoy festivals, shopping and feasting without worrying about the environmental costs involved. With products like organic Ganpati idols, organic Holi colors, biodegradable plastic bags and organic mangoes, Chatterjee aims to make celebrations nature friendly. She also provides services like wastewater management, composting solutions, and society waste management. She says that her biggest motivators are her two children. "I want to leave the earth liveable for our kids," Chatterjee says. However, she firmly believes that it is the younger generation who needs to be more proactive in this fight.

"It is your (younger generation) Earth. Fight for it. The adults will die and leave," Chatterjee says. When asked about why is it hard to convince people to adopt eco-friendly measures, she says it is not the fault of the citizens. She believes that it is the government's responsibility to be stricter on offenders and to bring the costs of eco-friendly technology down so that it becomes more accessible to the citizens. "Mumbai used to generate 10,000 tons of garbage every day and now it has come down to 7,500 tons. This is because of companies like mine," Chatterjee says. Not only does she change the waste landscape of Mumbai through Green Practices, she also actively creates awareness in the community about climate change and its disastrous consequences.  Her long term goal, she says, is to rid Mumbai of its landfills.