Exactly a month ago, on 5 January 2020, masked mobs ran amok in the Jawaharlal Nehru University in Delhi assaulting students and faculty for hours, in which JNUSU president Aishe Ghosh and professor Sucharita Sen suffered severe head injuries. Students and faculty members have filed over 40 complaints with Delhi Police, but they are yet to make an arrest.

This correspondent examined some of the complaints to understand the chronology of the events. On Sunday, 5 January, at 4 pm, the Teachers Association (TA) had called for a peaceful gathering of students and teachers at the Sabarmati Tea Point inside the campus. The university had been tense due to the agitation around the fee hike. TA called for the gathering to address that.

At around 4.20 pm, when Shukla Sawant, a professor was on her way to the peace meeting, she saw an armed mob of 10-15 from her car at the Mother Dairy booth, near the West Gate entrance. They were not wearing a mask. In her complaint, she has written that it would not be difficult to identify them from the CCTV cameras installed at that entrance.

About two hours later, some of the panic-stricken students approached the faculty members in the gathering and told them that an armed mob is hiding behind the Periyar Hostel, which is about 300 metres from Sabarmati Tea Point.

One of the faculty members immediately called the police but received no reassurance. At 6.47 pm, Sawant sent a message to JNU chief security officer Naveen Yadav, informing him about the armed group “hovering outside Periyar hostel”. “Kindly take immediate steps to ensure no violence takes place,” she concluded.

In the meantime, another professor, Amit Thorat, who had a bicycle, said he would go ahead and check what exactly is happening. When he reached the spot, he saw a mob of 70-80 youngsters standing outside the Periyar hostel, wearing jeans, sweaters and covering their faces with white handkerchiefs. “I froze when I saw that,” he said. “It was chilling to see that in the middle of JNU, an armed group was calmly getting ready to attack.”

Thorat made the mistake of being spotted by the mob when he tried to click a photograph. The mob soon encircled him and forced him to delete the picture. They manhandled him, but he managed to escape. He got back to his colleagues and conveyed the gravity of the situation.

Soon after that, anxious students and teachers decided to form a human chain. Women professors offered to be at the front, hoping the mob would not attack them. But that did not work. The mob started pelting stones and bricks and one of them hit Sen in the head.

At 7.18 pm, Sawant again messaged Yadav stating that “many faculty members standing at T-Point have been hit by sticks and bricks, including me”. “There is no semblance of support from any security service,” she said.

To which, Yadav replied, “Madam, please call the police. It’s available on the campus and at the gates. This is a law and order situation.”

The eyewitnesses and testimonies have called it a predetermined attack that would not have been possible without the complicity of insiders, JNU administration and police. The masked mob leaving the campus without any impediments further corroborates that allegation.

The screenshots from a WhatsApp group planning the attack had also gone viral on the day of the attack. The numbers in the group had several members from Akhil Bharatiya Vidyarthi Parishad (ABVP), student’s wing of the RSS. Dhananjay Singh, the chief proctor, responsible for law and order in the campus, was also part of that group.

Days later, India Today did a sting operation proving ABVP’s link to the attack by identifying some of the masked goons from the footage. The police have still not been able to nab the culprits. 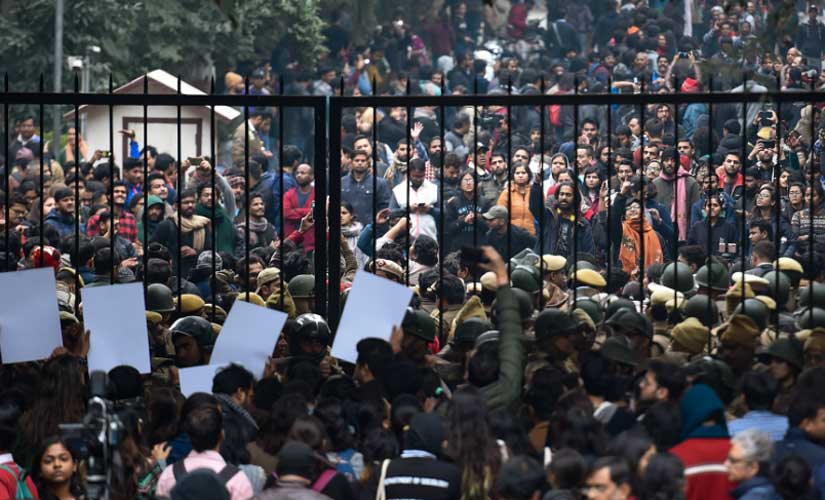 The ferocity of the attack shocked the university community particularly those at the receiving end. Image courtesy News18

Instead, in its press conference on 10 January, DCP (Crime) Joy Tirkey named seven students associated with Left-affiliated bodies and only two ABVP members. Alt News, in its investigation, revealed that the photographs released by Tirkey were the ones that were earlier circulated by ABVP members. It is important to note that Delhi Police reports to Home Minister Amit Shah.

The role of the police in the entire episode has appeared dubious. The first reports of violence from Periyar hostel emerged at 3.45 pm.

A professor with the Centre for International Politics, Organisation and Disarmament of the university, Santana Khanikar's testimony to the police suggests police complicity. Her residence is near the Sabarmati hostel, another venue of violence. At 7 pm, three girls and five boys — terrified and scared — sought shelter at her residence, for they were being chased by the violent mob, according to her testimony. Three of those told her that a Delhi Police inspector, Ritu Raj, with his team, stood in front of the Periyar hostel and did not intervene while people were being beaten up inside in the afternoon.

However, speaking to Hindustan Times, Deputy Commissioner of Police (South West) Devender Arya said, “Some 40-50 unidentified people, some of them covering their faces with mufflers and cloth and carrying sticks, were vandalising property in the hostel and were assaulting students. The rioters fled after seeing the police. The police personnel brought the situation under control.”

The frantic calls began again in the evening, but the police only entered the gates at around 8 pm, later saying they waited for the permission from the administration to enter the campus, which is strange because days before that, the police had barged into Jamia university without the administration’s approval.

Further, retired IPS and former UP DGP Vikram Singh told Hindustan Times that the police need not have waited for JNU administration’s approval, for the police are empowered to act under CrPC in the case of law and order situation.

Students and critics have demanded resignation from Vice-Chancellor Jagadesh Kumar for the delay in police permission, and his incompetence to protect students on his campus. He is said to be close to the ruling BJP government at the Centre. Even today, graffiti disparaging Kumar are seen on the JNU campus.

However, when the police entered, eyewitnesses wondered if they had walked in to catch the violent mob or to help them. By then several students and faculty members had been injured and terrorised, their cars vandalised.

At least, two professors saw the police walking alongside the mob. Mohinder Singh and Shambhavi Prakash, both professors, have mentioned that they saw a police contingent walking into the campus from the North Gate. Behind them was a mob of around 20 in casual clothes carrying sticks.

In the meantime, Ameet Parameswaran, another professor, had been trying to get the bleeding Sen some medical attention. A student on his bike offered to take them to the gate. A group of people at the North Gate stopped them. One of the group members pulled the student by his arm and asked who they were. It happened in the presence of the police and JNU security, according to his testimony.

The three of them could not get through. They turned around for the health centre where Sen received basic help, and the ambulance was called. At the North Gate, the ambulance was stopped again, was compelled to turn around and exit the campus from another gate, which was a longer route.

At the time when the masked goons had highjacked JNU campus, Delhi Police were busy filing an FIR against JNUSU president Aishe Ghosh, who, hours before, had her head split in the attack, and was later treated with 16 stitches. Ghosh, along with 19 others, were charged with vandalism on the campus on 3 and 4 January.

The university had been tense for days prior to the attack. Students, by and large, had decided to boycott registration, which is basically an enrolment into the next semester. They had been protesting the fee hike, and they had refused to appear for exams as well. They wanted the administration to resolve their issues before moving on to registrations, and that led to a few altercations among students.

However, while prompt at filing a case against Ghosh, the police are yet to act on Satish Yadav’s complaint. He is a second-year PhD student at JNU, who was beaten up on 4 January. In his complaint, he has named Aswini Mohapatra, Dean, School of International Studies at JNU, as one of the people to have beaten him up. The day after the 5 January violence, Mohapatra blamed it on the “notorious tuke-tukde brigade”

Violence on JNU Campus is the result of coercive action & deep frustration on the part of the notorious tukde-tukde brigade, which held the country’s centre of learning & excellence to ransom for over two months.

He is part of the recently formed JNU Teacher’s Federation (TF), which is said to be close to the JNU administration, as opposed to the TA. Ghosh had accused Mohapatra of assaulting protesting students the week before, an allegation he denied.

In his complaint, Yadav has narrated the account in detail, naming several names, none of which has been noted by the police to file an FIR.

The teachers that have filed their complaints to the police recently sent them an email, reminding that they have done nothing, and the attack is about to be a month old. The teachers have received no response; neither did this reporter who tried to contact them for this story.