An Indian Air Force fighter jet MiG-27 crashed near Jodhpur's Deolia village, reports have said. The plane crashed during a routine mission and the Air Force has said that a court of inquiry will investigate the cause of the accident, reported ANI. 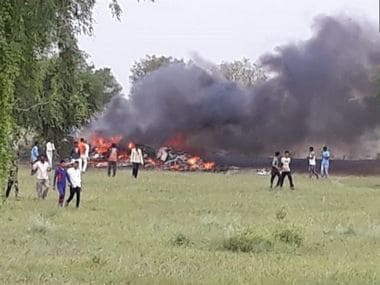 Image of the crash site. Twitter/@ANI.

The aircraft, which had taken off from Jodhpur’s airbase, crashed near a field and burst into flames but the pilot was able to eject from the jet safely, reported India Today. Large crowds had gathered on the field near the crash site.

Local police and fire brigade reportedly arrived at the spot in the village where the jet crashed.

However, this is not the first crash reported this year. In June 2018, a MiG-21 fighter plane had crashed in Himachal Pradesh's Kangra and the pilot was found dead.

In November 2017, another IAF MiG-27 fighter plane’s tyre burst while landing, after which it got stuck on the runway at Jodhpur airport, The Times of India had reported.