Jawaharlal Nehru University is not an island from where critical-thinking beings are slowly going extinct. But in recent times, it does tend to behave like the hunted. This is especially true after former president of the JNU Students’ Union Kanhaiyya Kumar was arrested on the grounds that slogans demanding liberation of Kashmir from India were raised on the university campus and the incident soon snowballed into a political controversy and drew support from several Opposition parties, teachers, students and academics across the country. The word 'dissent' found its place in the public psyche and since then the tug of war between the Right and the Left has only gotten intense.

Such is the game of ideologies here that even the destinies of those who aren’t pulling on either side end up getting hurt. The university has recently chosen to react aggressively against one professor who is an alleged sexual offender and maintained a deafening silence over another professor charged by one of its own students for having tried to cover up a sexual assault case and also victimise the witness.

The first case is that of Professor Atul Johri's.

Johri's pro-government nature was made public during the massive protests that broke out against him on and off campus. In a press statement issued by complainants that student activist Umar Khalid tweeted, it is stated that "The accused who is a vocal supporter of the BJP/RSS has said that we are Left supporters and it’s a political conspiracy. While the truth remains that many of us are registered members of the Akhil Bharatiya Vidyarthi Parishad (ABVP). We want that this case should be taken as a serious case of sexual harassment and no political undertone should be given to this."

The JNU community marched towards Parliament and #JohriHatao did the rounds on Twitter. Support poured in from Bollywood too, when lyricist Javed Akhtar tweeted this:

If the choice is between believing ten average , normal girl students who all are accusing a man for sexual abuse or that man , I will believe the girls . Atul Johri should be suspended by the JNU VC , today , RIGHT NOW — Javed Akhtar (@Javedakhtarjadu) March 18, 2018

Congress leaders, including, Sushmita Dev and Sharmistha Mukherjee met the victims and Delhi Commission of Women chief Swati Maliwal censured the Delhi Police for their inaction and also expressed her support for the victims. Such activism was needed because Johri, who had eight FIRs against him, was granted bail within hours of his arrest. Students of the School of Language, Literature & Cultural Studies waiting outside the department building during the second day of the university lockdown due to teachers and students resisting autonomy status. Image by Pallavi Rebbapragada

On the same campus, while one camp is protesting against Professor Johri, another camp is trying to gather numbers to protest against one Professor Mahendra P Lama. Earlier this week, the Delhi High Court issued a notice to Jawaharlal Nehru University and four professors. Other than professor Lama, who is with the Centre for South Asian Studies, the names of Prof Rajesh Kharat, former chairperson, Centre for South Asian Studies; Ajay Kumar Patnaik, Dean of School of International Studies along with Chintamani Mahapatra, Rector-I, Administrative Block have been mentioned. The notice comes after Prashant Kumar Sharma, a PhD candidate at JNU's Centre for South Asian Studies, filed a writ petition claiming he was being targetted for helping another student who was allegedly sexually harassed by Professor Lama. The petitioner claims he was with Lama and the victim in Sichuan University in Chengdu, the capital of Sichuan Province, China, where the alleged assaults took place. Sharma's version of the story is: after the professor found out that Sharma helped the victim board a flight back to India, attempts were made to evict Sharma from the university by unlawful denial of registration in the Winter Semester 2018. The writ petition stated: "...to grant the Petitioner Registration and to conduct an independent disciplinary inquiry (hereinafter referred to as “Inquiry”) into the matter that has caused huge financial loss, extraordinary academic delay and extreme mental agony to the Petitioner. The Petitioner has already lost almost eight months of academic time till now due to which not only his academics has got jeopardised but he has also been deprived of scholarship which has posed threat to his survival.’ It further states that instead of encouraging the petitioner, the chairperson and the supervisor have left no stone unturned to destroy petitioner’s career for their personal agendas. ‘The Petitioner is confirmed PhD student, as per the University rules, and the Chairperson does not have any authority to deny Registration to the Petitioner. The Petitioner’s admission has been confirmed after intervention of the Hon’ble Vice Chancellor (hereinafter referred to as “VC”) since the Respondent no. 2 (hereinafter referred to as “Chairperson”) and Respondent no. 3 (hereinafter referred to as “Supervisor”) had sabotaged the continuity of the Petitioner’s academics." Firstpost reached out to both parties, the affected and the accused, to find out why a student of who has risen from the slums of Howrah, West Bengal, to come to Delhi had to file a 93-page-long writ petition and engage a legal counsel when there is a grievance redressal mechanism existing within the university. The petitioner’s lawyer Dibyanshu Pandey, who is arguing pro bono, said the complainant came to him when he was on the brink of eviction from the university and had nowhere to go. "He was suicidal as on being evicted, he would have no place to stay in Delhi and would lose all the academic accomplishments in one go," Pandey said and asked why no activist from JNU or its student community raised its voice in support of Sharma, who came back from China in November 2017. "When he approached me, he had a debt of more than a lakh rupees and the reason for that debt was that when his synopsis was not passed by his school, Sharma had to abandon his course in China and rush back which led to a lapse of his scholarship. There were three people who were to clear the synopsis – the supervisor (Prof Lama), the chairperson (Prof Kharat) and the dean (Prof Patnaik),” Pandey claimed that technically there wasn’t any need for him to come back to India for the approval of that synopsis. Pandey's question is, why is a lawyer required to represent a student who comes from a university that projects itself as the torchbearer of equality and justice? He feels a de-politicisation of human rights advocacy is the need of the hour, and not just in JNU. Sharma also spoke to Firstpost and revealed that he has suffered huge financial and psychological blow from the arbitrary denial of his registration, which ultimately led him to move court. Every semester, a student has to register in the university to avail hostel and other facilities. Every semester a new ID card is issued to the student, without which even entry into the campus is difficult. On 20 March, 2018, the day the Delhi High Court issued a notice to JNU and four others, the university gave an oral undertaking before the high court of not evicting Sharma from the hostel. Sharma told Firstpost that he had three demands — one that his registration be given immediately, second that his supervisor be changed immediately, and third that a disciplinary inquiry be initiated against his offenders. Firstpost reached out to the ICC, the internal body that is responsible for matters pertaining to sexual harassment against women. The presiding officer said that the inquiry is going on and until a decision is made, the details of the offenders or the case cannot be shared as there is a clause of confidentiality that cannot be breached in such sensitive issues. When Firstpost asked the officer why this clause was breached in Professor Johri's case, the response was this: "No complainant, no defendant, no lawyer had reached out to the ICC in that particular matter. There is no written complaint that we have received against Johri,” the presiding officer confirmed. Now, the question is, if there is a structure and a process in place, then why is there a need for external forces, be it politicians or activists, to raise these issues on the streets? After listening to Sharma's version of the ordeal and going through a public post of another student, Firstpost spoke to Professor Lama, who is a reputed South Asian studies scholar and has been quite vocal in the demand for Gorkhaland. He said he hadn't received a copy of the notice issued by the high court and doesn't know the contents of the case. "I have been waiting for the notice to arrive. I am bound by the clause of confidentiality of the ICC and hence cannot reveal details of the nature of the case filed against me with the ICC,” he said that two girls who filed the complaint weren’t able to submit the first draft of their PhDs and thereby alleged that they were being mentally harassed by him. Regarding Sharma's denial of registration, Lama said it happened because of Sharma's difference with the higher authorities, which happened while Prof Lama was away at Sichuan University, where he has been teaching since 1.5 years. We also reached out to Prof Kharat who said he is on leave and hasn’t gone through the High Court notice and is appearing before the ICC in the ongoing inquiries against him. Meanwhile, the student leaders on campus had their own version of the story to share. JNUSU president Geeta Kumari said that a press release had been issued and added that since the nature of the complaint is unknown and she doesn’t know what the offenders want, there is no clarity on what action could be taken. 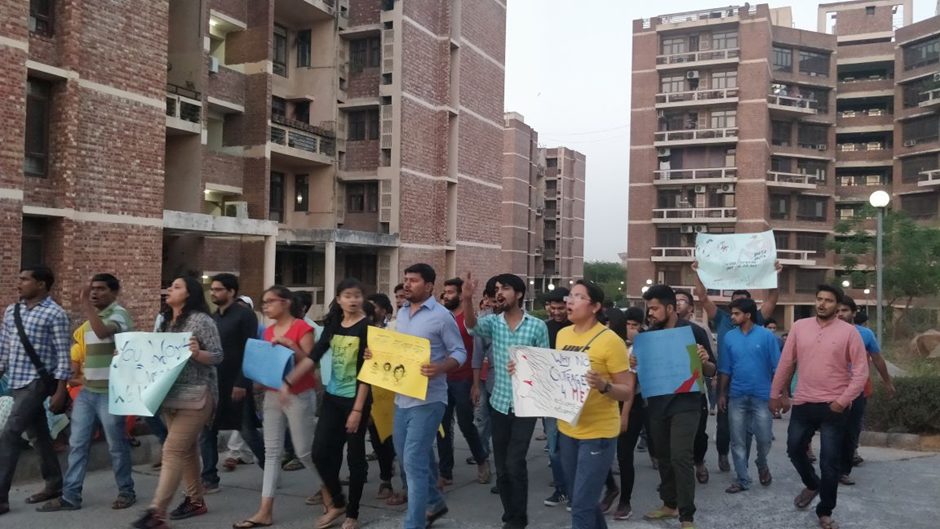 Members of ABVP in JNU marching towards the Vasant Kunj police station, demanding that a high level inquiry be taken up against Professor Mahendra Lama who has been accused of sexual cover-up and victimisation of the petitioner

Meanwhile, Saurabh Sharma, former general secretary of the JNUSU and member of the ABVP asked why this issue wasn't a raging priority for the students' union.

The so called progressive and pseudo feminist comrades are silent on M.P Lama. Why? Is it alright for the comrades in the faculty to sexually harras a student?#Rapist_Commie_Lama #SuspendLama #PatnaikShieldsRapist pic.twitter.com/qR9vUenuFH — ABVP JNU (@abvpjnu) March 28, 2018

"The entire university was united while demanding suspension of Professor Johri and his links with the BJP and RSS were being made public again and again. Now, when a particular professor who some students are rallying against happens to endorse the ideology of the Left, there is a strange silence. Are these students' rights not valuable enough?" asked Sharma.

This is the unfortunate consequence of the absence of a middle ground between two radical ideologies. In 1996, George P Lakoff, an American cognitive linguist and philosopher wrote the book Moral Politics: How Liberals and Conservatives Think. In the context of the Cold War between certain ideals of JNU and certain decisions of the state machinery, a detailed re-reading of this text seems necessary. The author constructs a model of ‘unconscious political worldviews’ to understand better why the liberals and conservatives speak an altogether different language and are puzzled at each other’s concerns.

The fact that one complainant is fighting a lone legal battle and another set has found support in a campaign that made national headlines shows it is not the person but the ideology of the offender that matters more.