Insha Rasool, 30, a native of Budgam district in central Kashmir, did not let her transition from academia to farming go to waste and has successfully turned her business into a prosperous one

A scientist from Kashmir left her doctoral studies in South Korea in the middle of it in order to pursue her passion for starting an agricultural business. Insha Rasool, 30, a native of Budgam district in central Kashmir, did not let her transition from academia to farming go to waste and has successfully turned her business into a prosperous one.

Insha, who was studying molecular signalling at a South Korean university, was interested in finding out more about organic farming. For the past two years, she has put a lot of effort into growing the “farm-to-fork” business –Homegreens. She contacted nearby farms before beginning this project, purchased fertiliser and seeds, and hired people to assist with planting, tillage, and other activities. 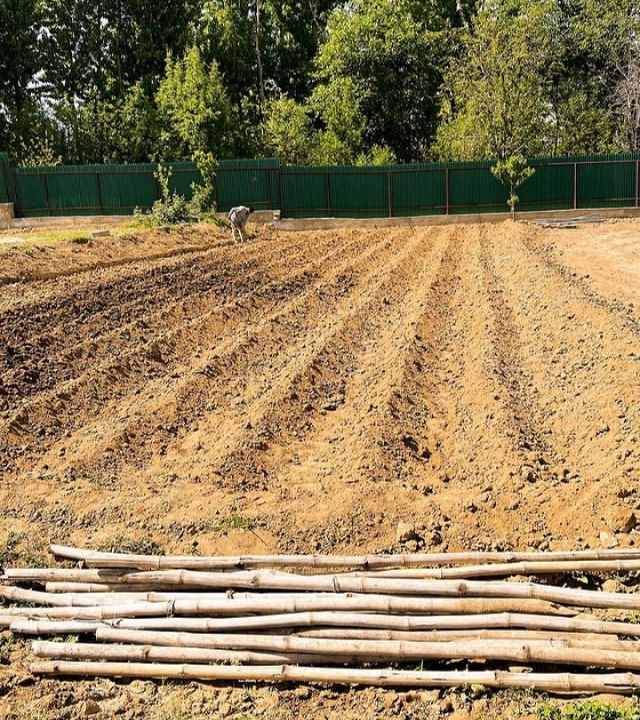 “As a scientist, I did extensive research on organic farming before starting this project. In Budgam, we had 3.5 acres of ancestral land. My experience in this sector has been fulfilling thanks to my parents’ support, even though I still have ways to go,” says Insha.

Insha says that they are currently doing this on an experimental basis as it needs a lot of research. “My venture has been a successful one so far,” she adds.

Insha quit a well-paying position in South Korea to pursue her aspirations.

When she saw the wide, gorgeous fields in South Korea, she wondered and even asked her husband why there weren’t any such lovely farms in Kashmir. “My husband then asked why not me. I spend most of my time in my fields educating workers on the organic and unusual crops,” says Insha. Her journey into organic farming began in 2018, and it is now thriving with each passing day.

When she is not farming, she markets and sells her products on the Homegreens social media pages including varieties of vegetables and sweetcorn that are in high demand in the country. She claims that customers make purchases of her produce and other products on social media within 24 hours. “I have tied up with a number of growers who produce and market organic vegetables. The demand for my products is really high. The majority of my items are sold before the harvest,” says Insha, who studied at the Indian Institute of Science in Bengaluru.

Insha’s portal also receives a lot of feedback from people seeking advice on how to grow organic veggies in their gardens or farms. “If all goes well, I would construct a school where we would instruct students on how to raise organic produce, particularly veggies. Consuming high-quality, pesticide and chemical-free goods is important,” she says.

Organic farming presented its own difficulties to Insha. “We require specialised seeds which we procure from the United States. Nevertheless, delays in their delivery occasionally result in issues. Additionally, organic insecticides must be purchased in large quantities, which is expensive and problematic at times,” says Insha.

Additionally, she has used her funds to amass a collection of rare seeds from domestic and international seed banks as well as her maternal grandmother’s personal stock.

Sometimes, not all of these seeds would develop into crops. She pulled weeds by hand until she found plants that were weed-repellent as a permanent fix because weed infestation was a severe problem.

A challenging task to Insha

Insha has stayed in different states that too in lush green locations. She moved to South Korea after residing in Kashmir, Delhi and Bangalore where the climate is more adaptable and pleasant. She asserts that after learning that her ancestors were farmers, she became interested in the profession.

She used her two years of dedicated work as a foundation to create HomeGreens, a farm-to-fork brand. She owned the land where her forefathers had once raised their own food, including vegetables and crops.

“I had more difficulty than I expected. Sometimes the crop may not grow or the fertiliser may stop working. I sometimes add more water. Sometimes I planted the tees too early, which prevented the seeds from growing. This experiment continued for six months. In the end, I chose to continue farming. It fundamentally altered our life. And today it proves that this decision was the right one,” says Insha.

Insha even tried the seedling process in trays as she thought some heirloom seeds require more nutrition. It took her close to five months to determine the perfect soil-to-water ratio for germination. The weather presented another issue. She was thrilled when her farm produced lettuce in the summer, but it turned out to be bitter. After a year, bell peppers, lettuce, broccoli, chillies and beautiful cherry tomatoes were finally growing.

She feels despite her tireless work, there is still more to be done. “We’re still testing things out. In the upcoming years, we intend to do a lot more and collaborate with others to make organic farming a movement and successful business,” says Insha.

Each acre was divided into four portions by her. By doing this, she ensures that she received multiple crops across a number of cycles as opposed to just one crop in a single cycle.

“We sow seeds in one section, use the next section after a month, and so forth. I also plant swiftly growing crops like coriander, spring onions, herbs, fenugreek, collard greens, etc. alongside the slower-growing ones to ensure that no section of the ground is left fallow,” says Insha.

She also began implementing the intercropping technique to ward off pests. She grows pest-repelling plants like artemisia, garlic, and common nettle between the veggies. In the event of a bug invasion, she utilised a fermented mixture of artemisia, neem oil, chillies, onions, and garlic.

Insha has kept her goods pricing reasonable. Every day, more people are interested in her company’s products. She earned just over Rs 8 lakh in November and December of last year. “Our expansion has been constant. We also sell frozen French bean and pea varieties in addition to blanched sweet corn and tomatoes. We have year-round sales capacity,” she says.

What’s even more remarkable is that Insha has promoted unique vegetables and value-added products like pickles across India by collaborating with local farmers under her brand name. She claims that she organises groups with an average of 15 to 20 farmers each month and provides them prices above the going rate.

Ghulam Ahmed, a local farmer from Budgam, says that Insha has been posting on her Instagram account about new farming practices from which he has benefitted.

“Her posts on social media prove very fruitful to the local farmers. In my entire life I have never seen such a creative farmer who brought new organic farming techniques to Kashmir,” says Ghulam. “The majority of educated youth in Kashmir avoid farming. Insha is shattering social taboos and providing the unemployed youth with an unheard-of example.”

Homegreens is not just a mere professional venture, it is an inspiration to sow hope, nurture it and turn a dream into reality against all odds.

The author is an independent journalist. He tweets @Irshad55hussain

Nadav Lapid didn’t have pleasant remarks about Vivek Agnihotri’s film The Kashmir Files, which released in March this year