The 1968 photographs of Paul McCartney in the backdrop of dry Jakhan River also show two similar trees on the right side, but they got uprooted long back

A 2018 photograph of the Jakhan river site in Dehadun . Members of the Beatles band took a halt here during their trip to Dehradun. A 1968 photograph of Paul McCartney at the site is available on social media. Image courtesy Raju Gusain

Strawberry fields could be forever, but sometimes Haldu trees don’t last. The iconic Haldu tree (scientific name Adina cordifolia) which was the backdrop for a rare picture of music legend Paul McCartney during his tour to Dehradun in 1968 has been uprooted by the recent flooding in the Jakhan river. Paul and other members of the famous Beatles band visited the Himalayas to learn transcendental meditation from their Guru, Maharishi Mahesh Yogi. 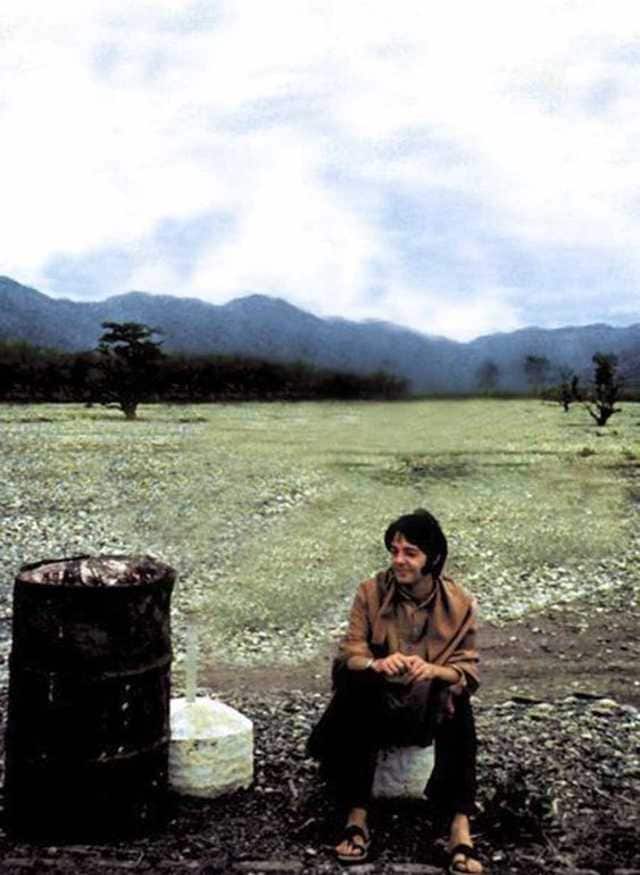 Paul McCartney sitting on the roadside with a coal tar barrel/drum near him in Dehradun. Image from Pinterest

In the 60s, Rishikesh was tiny compared to what it is now, and the Beatles and their friends would have to come to Dehradun for shopping. The environs of the city took George Harrison under its spell and he even composed a song on Dehradun city.

The Beatles came to Rishikesh in mid-February 1968 and the trip created worldwide media hype. Among the Beatles, Ringo stayed for 10 days, Paul McCartney for five weeks, George Harrison and John Lennon each for eight weeks. The bungalow where members of the Beatles band stayed in Rishikesh. The campus is now managed by the Rajaji Tiger Reserve of the Uttarakhand forest department. Image courtesy Raju Gusain

Not many photographs of the Beatles visiting Dehradun are available online and in published books, magazines and newspapers. A photograph available on social media shows Paul McCartney sitting on the roadside with a coal tar barrel/drum near him. Paul possibly got hooked on the sight of an old tree standing lonely right in the middle of the rain-fed Jakhan river, near Ranipokhri. It exhibited the determination and strength of a tree of surviving in tough conditions. Paul wasn’t the only one; many people using the Dehradun-Ranipokhri highway used to get a similar feeling and they would click photographs of and with the old Haldu tree.

Ajeet Singh, the late owner of Pratap Music Shop in Dehradun, used to say that the Beatles band members and their friends came to Dehradun “two or three” times. Ajeet had played Vichitra Veena at the 25th birthday bash of George Harrison in Rishikesh.

The trip of the Fab Four to Dehradun was sudden and local photographers failed to click their snaps in the city. The Paul McCartney snap at Ranipokhri is the only photograph of the Beatles near Dehradun and was probably clicked by British film producer Denis O’Dell.

The 1968 photographs of Paul McCartney in the backdrop of dry Jakhan River also show two similar trees on the right side, but they got uprooted long back. The river becomes active during monsoon and is usually dry the rest of the year. The lone standing Haldu survived a major scare last year when flooding caused damage in the riverside area of Ranipokhri. A portion of the old Ranipokhri bridge got washed away in 2021. Last month, flooding created havoc and washed away the temporary road and also washed the iconic Haldu tree into history forever.

Ali Murtaza, monitoring the whitewash of the new Ranipokhri bridge, said, “The 20 August flood washed away the electric poles and the temporary road. The tree also got uprooted this time.” The uprooted Haldu tree, which formed the backdrop for a photograph of music icon Paul McCartey in 1968 near Dehradun. Image courtesy Raju Gusain

George Harrison was highly motivated by the Dehradun visit and his song captures the road journey ‘Many roads can take you there many different ways/One direction takes you years, another takes you days.” The Dehradun composition was recorded during the recording of ‘All Things Must Pass’ -his first solo album after breakup with the Beatles band- but it was never officially released. The song is available online (https://www.youtube.com/watch?v=k4RN0masLO8). In those days, commuters had to wait for long hours for public transport on Dehradun-Rishikesh highway; Harrison’s lyrics mirror this: “Many people on the roads looking at the sides/ Many others with their troubles looking for their rights.”

The uprooted tree is still lying on one side of the Jakhan River. The exposed and upturned roots present a sad picture. The Haldu tree had even caught the fancy of Bollywood filmmakers in the 70s. Sudhir Raturi, village Pradhan (head) of Ranipokhri, says, “It is sad. I saw the tree at that position from my childhood. It was unique. Old villagers used to say that the shooting of a Hindi film also took place there in the 70s, but we have failed to track the name and other details of the movie.” The construction work of the old Ranipokhri bridge started in the early 60s and was near completion in 1968. The coal tar barrel featured on the photograph also hints that the blacktopping of the road was taking place at that time.

Wall painting of the Beatles with Maharishi Mahesh Yogi at Chaurasi Kutiya Ashram in Rishikesh. The erstwhile Ashram of Maharishi is now famous as Beatles Ashram among tourists. Image courtesy Raju Gusain

The tour of the boys from Liverpool played a key role in boosting foreign tourist arrivals to Rishikesh. Western media came and covered the spiritual journey of the Beatles at Maharishi Mahesh Yogi Ashram. Positive media coverage in the international media made the town located on the bank of Ganga emerge as a hot destination among Western tourists. The camp was located in the outskirts of the Rishikesh town and Ringo, John, George and Paul loved every moment spent in the holy township. The Beatles composed 48 songs, including a major part of the White Album, during their brief stay at the Ashram. The stay in the Himalayas is considered one of the most creative periods of the Liverpool boys in their career. The uprooted Haldu tree, which formed the backdrop for a photograph of music icon Paul McCartey in 1968 near Dehradun. Image courtesy Raju Gusain

The Beatles and their friends adopted a simple lifestyle in Rishikesh. Pure vegetarian food was the norm, and lots of time was devoted to meditation, interacting with Maharishi Mahesh Yogi, composing music and visiting nearby places. The spiritual camp where the Beatles came is presently under the control of Rajaji Tiger Reserve. The land lease of Ashram ended in the 90s and it is now managed by the forest department. Tourists visiting Rishikesh can see the bungalow where the Beatles had stayed, at Chaurasi Kutiya in Rishikesh. Though the official name of the erstwhile campus of the Maharishi Mahesh Yogi Ashram is Chaurasi Kutiya, but it is more famous as the Beatles Ashram.

The room in the factory situated next to Vanatara Resort, where the other accused lived, was also set on fire. All the evidence related to the incident has been destroyed,” he said, adding that a concerted effort was on to weaken the case