Himachal Pradesh Assembly polls to be held on 9 November; dates for Gujarat to be announced later, says EC

New Delhi: Assembly polls in Congress-ruled Himachal Pradesh will be held on 9 November, the Election Commission announced on Thursday, but gave no dates for BJP-governed Gujarat whose Assembly term also ends in January 2018.

The results for the election in Himachal Pradesh will be announced on 18 December. 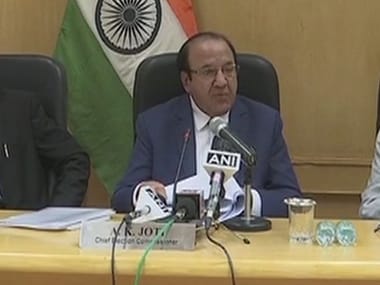 Announcing the schedule, Chief Election Commissioner AK Joti said the filing of nominations will open on 16 October and the last date will be 23 October. Scrutiny will be done the next day and the last for withdrawal of candidates will be 26 October.

Polling will be held on a single day on 9 November and the vote count will be taken up on 18 December after completion of the election process in Gujarat, which the BJP has ruled for almost 20 years.

For the first time ever, the Election Commission will set up 136 all-woman managed polling booths in Himachal Pradesh, with each constituency having two of them.

In the 68-member Assembly, the ruling Congress has 35 members while the strength of opposition BJP is 28. There are four independents while one seat is vacant.

The BJP will be fighting out on the back of a sweeping Lok Sabha victory in 2014 in the state too and landslide wins in Uttar Pradesh and Uttarakhand Assembly polls in March.

Reporters plied the Chief Election Commissioner with questions about why election dates for Gujarat were not announced on Thursday.

Joti cited some office memorandums issued earlier to justify the delay in the announcement regarding Gujarat, saying the Election Commission had a statutory 21 days to carry out elections that can extend up to 45 days. He also said elections to the two states — Himachal Pradesh and Gujarat — were announced separately in the past too including in 1993, 1994 and 2002. He said besides availability of central forces and festive season, the Gujarat government had told the Commission that several relief and rehabilitation works were on in the state following the July floods.

He said the election process in Gujarat will be completed before the vote count in Himachal.

"The basic principle is that the voting pattern in one state should not affect the results of another state that goes to polls in a short period. Prior to Himachal results, the voting process will be over in Gujarat," he said.

The poll process in Himachal Pradesh will start with the issue of the gazette notification on October 16 when candidates can start filing their nominations.

Joti, who was flanked by Election Commissioners O P Rawat and Sunil Arora, said the last date for filing of nominations is October 23.

The Chief Election Commissioner said VVPAT machines will be used in all constituencies in Himachal Pradesh because of which a voter will be able to see to which party, symbol and candidate his vote has gone to.

Himachal Pradesh will be the second state after Goa with 100 percent VVPAT (paper trail of votes) coverage. The paper trail machines will be deployed along with EVMs in all the 7,521 polling stations, including 42 auxiliary polling stations at remote places.

It said VVPAT machines from one polling booth in each of the 68 assembly constituencies will be tallied with EVM results to check the vote count.

The Commission has also increased the size of the VVPAT paper trail screen, where voters can see for whom they have voted.

Joti said photo electoral rolls will be used for Himachal polls and photo identity cards have been issued to all voters.

He said voter slips will be distributed to each and every voter in the state seven days before the polls along with a voter guide brouchure in the local language of Hindi.

The chief election commissioner said voter assistance booth will also be set up and the size of the standardised voting compartment will also be increased from 24 inches to 30 inches, keeping in mind the introduction of paper trail machines.

Each candidate contesting the poll will have to maintain a separate account of poll expenses, which have been capped at a maximum of Rs 28 lakh for Himachal Pradesh. However, the candidate will have to submit the election expenses to the returning officer within a period of 30 days after the declaration of results.