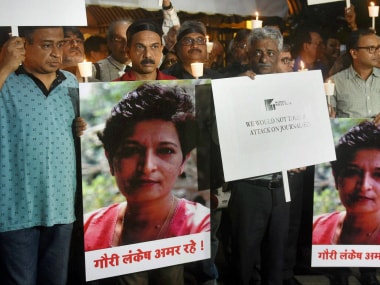 Journalists participate in a protest in Mumbai to condemn the killing of Gauri Lankesh. PTI

The BJP MLA from Sringeri, while flagging off a BJP Yuva Morcha rally, suggested that Lankesh was killed because she published a story with the headline “Chaddigala Marana Homa (the last rites of the short pants or the RSS)”, The Indian Express reported.

Lankesh was killed at her residence in Bengaluru on Tuesday evening. Lankesh, a well-known critic of the right-wing, was shot dead from a close range at her house in Rajarajeshwari Nagar.

In the video accessed by India Today, Jeevaraj is heard saying, "We have seen how RSS workers have lost their lives during Congress rule. Gauri Lankesh had written in her paper about 'chaddigala marana homa' or the slaughter of the RSS. Now, had she refrained from writing such articles she would have been alive today. Gauri is like a sister to me but the way she has written against us (BJP and Sangh), is unacceptable".

Jeevraj also hit out at the langauge Lankesh had used in her article. "If she had not written 'chaddis maarana homa’ in her paper that day, would she still be alive today?" he asked, according to a report in The News Minute.

His statement provoked condemnation from all quarters.

Chief Minister Siddaramaiah, reacting to his comments said, "What do you make out of his statement? Does it indicate who is behind this murder?" The Indian Express reported. A group of Congress workers in Sringeri also filed a police complaint against him.

However, the BJP MLA later said that his words had been misunderstood and “misinterpreted” by the media, reported The Hindu. The report quotes Jeevraj as saying, "I said if Gauri Lankesh had criticised the killings and if Siddaramaiah had put all those involved in the crime behind bars, nobody would have dared to kill her today. I just wanted to express that the failure of the government with regard to previous murders. Besides that, I have expressed condolences for her murder."

The Karnataka Police has formed a 21-member Special Investigating Team to probe the murder. Karnataka government has said that it is hopeful of nabbing the assailants "as soon as possible".