'Nyayadhin Bandi Kothdi,' says a board tucked away in a secluded corner of the Sessions Court complex at Shivajinagar, Pune. That is where the under-trial prisoners who are produced in court are kept in transit from Yerwada Jail. Anxious relatives braved the rain on Thursday (27 June) to get a glimpse of their family members, but a thunderstorm put paid to that. Under-trial prisoners here are escorted to court, tied with thick rope, against Supreme Court rulings. However, the police are more careful with regard to the nine arrested in the high-profile Bhima Koregaon case where they seem to obey the law.

Among those who waited that day was Tushar Kanti, husband of Nagpur University professor Shoma Sen, one of those in prison. He had not gone to the jail to meet his wife and he was waiting for the court proceedings that day which were pushed to 3 pm. He said the jail did not provide even chairs for prisoners and they had to sit on the ground. It took three months after some failed attempts to get a chair for Sen with due permission as she has arthritis and finds it difficult to sit on the ground. Now, there is a chair placed in her cell.

Also read on Firstpost — Arrested professor Shoma Sen's daughter Koel says: My mother's been tagged a Maoist after lifetime of working for others

The jail also does not have beds, and inmates sleep on blankets on the ground. In the case of 79-year-old poet Vara Vara Rao, also among those arrested, the hard, cold floor is not kind to his age. He is no stranger to jail and has been arrested before. Yet this time, even he is surprised and discomfited by the jail conditions. Hemlata, the wife of Vara Vara Rao (Left) and a friend Rukmini (Right) had come from Hyderabad and Guntur respectively to meet Rao. They wait to see him being brought to court. All photographs by the author

Rao’s wife Hemlata, 69, and one of his three daughters came from Hyderabad to meet him in jail. "He is much better now,” said a relieved Hemlata, after a “jail mulaqat”, but was distressed that the interview was cut off at the tenth minute. “They press the button while you are talking. There is a glass partition so we can’t talk directly,” she complained.

Among the things Rao misses is reading in Telugu. In court when all the nine accused in the Bhima Koregaon case were produced finally in the afternoon, friends of Rao, like CSR Prasad and his wife Rukmini from Guntur, handed over a copy of a book to him, published by Virasam (Viplava Rachayatila Sangam, or Revolutionary Writers Group). Rao or VV as he is known, touched the green cover with affection. It was a newly published collection of his forewords to various anthologies of his poetry, said Mr Prasad. Another colleague of Rao’s, Ramakrishna who runs a publishing house called Perspectives, and his wife Vasanta, had also come all the way from Hyderabad to meet him. Rao seemed very pleased with just seeing the Telugu books. He is not allowed access to the literature in a language he loves and of which he is a master. Only English is allowed, as the jail staff cannot read Telugu and there are no censors who can vet the content. Even his wife has to make applications in English to the jail staff.

Among the visitors to the court were lawyers, activists, supporters and family members of the accused. Susan Abraham, advocate, whose husband Vernon Gonsalves is among the nine in jail, said, “It is a political conspiracy case to rope activists from different walks of life and frame them. The assassination plot story is taken from the Gujarat model when Narendra Modi was the chief minister. The assassination plots were a regular feature then and suspects were bumped off. In this case, they have been framed under a draconian law like the Unlawful Activities Prevention Act (UAPA).” Abraham, who makes regular jail visits, said Yerwada was the worst jail in Maharashtra she has seen in her years as a lawyer.

In the beginning when Rao was jailed, he didn’t get medicines for his migraines and it took two weeks to get that organised, said his nephew N Venugopal, editor of Veekshanam, a monthly socio-political magazine, who visits regularly. It was delayed as the judge asked for a doctor’s prescription, after the public prosecutor objected. Speaking to Firstpost, he said Rao was in a solitary cell and allowed outside from 6 am to 6 pm. In Indian jurisprudence, bail is the rule and jail the exception, here it seems to be the opposite, he added. Rao is not new to jail; he has faced 25 cases in the past and has been in prison where he has got all facilities including a table and a chair, but here there is nothing. Tushar Kanti, Shoma Sen's husband, is among those waiting to catch a glimpse of his wife as she is being brought to court

However, the jailed activists have been busy with various activities, and one of the visitors that day was an undertrial who managed to get out on bail, thanks to the efforts of advocate Surendra Gadling from Nagpur, one of the accused. While Gadling is busy helping people in jail to get out, his own bail application along with the others is pending since March 2019. Gadling argues his own case, and in court he made a forceful demand that his petition for default bail be heard on an urgent basis. However, the public prosecutor Ujjwala Pawar sought more time to reply and the case will now be heard on 6 July.

Three of those arrested — Vernon Gonsalves, Arun Ferreira and Sudha Bharadwaj — have approached the High Court and their bail petitions will be now heard on 29 July, while the remaining six — Gadling, Rao, activist Rona Wilson, Shoma Sen, Mahesh Raut and Sudhir Dhawale — have filed bail applications in the sessions court itself.

It was in June 2018 that the Pune police arrested some of the activists for their alleged Maoist links and the violence at Bhima Koregaon, and later uncovered an alleged plot to assassinate the Prime Minister. From the original first information report (FIR) dated 8 January, 2018 where six people were named, only activist Sudhir Dhawale has been arrested. They were accused in connection with the Elgar Parishad on 3 December, 2017 — a meeting of all Dalit, Bahujan and minorities groups at Shaniwarwada in Pune organised by retired justices BG Kolse Patil and PB Sawant to commemorate the 200th anniversary of the battle at Bhima Koregaon in 1818 where the local Mahar community fought alongside the British against the Peshwas — seen as one of their first steps in the fight against caste oppression. A day later, when hundreds of Dalits gathered as they do every year at the memorial at Bhima Koregaon near Pune, there was violence in which one person was killed.

While there are two FIRs filed against Sambhaji Bhide and Milind Ekbote, Right-wing activists, for instigating the violence in Bhima Koregaon, Bhide was not arrested. Ekbote was arrested but he was released on bail. Earlier, the Maharashtra government had withdrawn three cases of rioting against Bhide. While investigation in this case hasn’t yielded much, the Pune police in response to an FIR by Tushar Damgude made the nine arrests in connection with the violence and for allegedly being members of the banned Communist Party of India - Maoist over a period of 8 months. 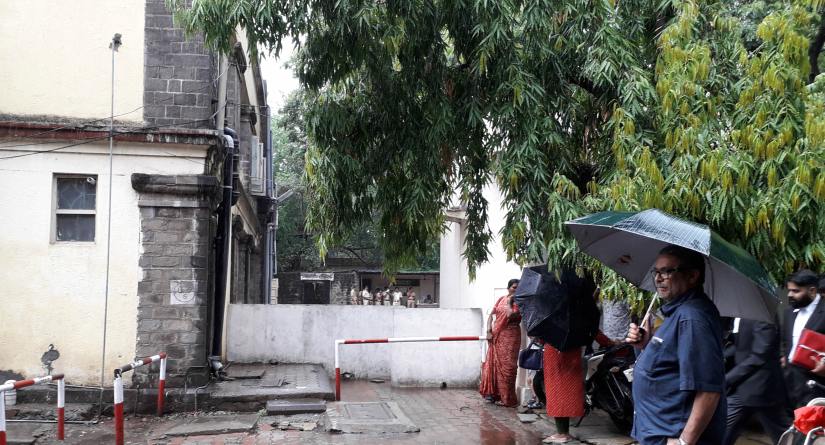 Sessions court: The corner where under trials from Yerwada Jail are kept before being produced in court

The nine are in jail, five of them since 6 June and four since 28 August, 2018 in the Bhima Koregaon case. Since much of the evidence is in the form of letters found on computers, the accused had asked for the cloning of data from the seized material, and mirror copies to be made available to them. This was permitted by the earlier judge and the Forensic Science Laboratory has begun to hand over data on 21 June. But this is a laborious and time consuming process.

Meanwhile, investigations in the case are continuing, said Assistant Commissioner of Police (ACP) Shivaji Pawar who is also the investigating officer. Other than the preliminary chargesheet filed in November 2018, the police have filed a supplementary chargesheet in the case in February 2019 against the five accused persons in jail and one more Maoist, based on more evidence.

While there has been all round condemnation of the arrests and the case itself, there has not been any relief for the accused from the Supreme Court or the High Court as yet. The apex court did order that the four accused arrested on 28 August, 2018 be kept under house arrest for two months, but they were jailed after that. Time will tell what the due process of law will uncover.